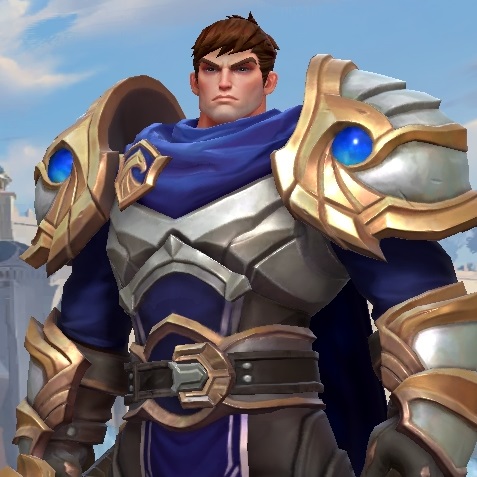 Best Garen Wild Rift build guide for Season 7 Patch 4.0 of WR. With our Garen guide you will learn which items to build, runes to select, skill order, who counters Garen, and how to use abilities properly.

Garen was born to be the defender of Demacia. As Demacia’s most formidable soldier, he is the very embodiment of all the greatest and most noble ideals upon which it was founded. He is a tank fighter who excels in winning trades with his opponents and executing those who dare oppose his might.

Here are Item Build Recommendations that works on this champion and which are the best build for Garen Wild Rift in this patch.

This is a balanced Garen Wild Rift Build that will give you both survivability and damage output.

This Garen Wild Rift build focuses on increasing the survivability of Garen so he is more able to create space and provide utility for his team.

Runes for Garen in Wild Rift

These two are the best spells you can equip for Garen Wild Rift.

Ignite helps you secure kills especially when you are still unsure of the kill HP threshold for Demacian Justice.

You will always find yourself overextending because of Garen’s playstyle which encourages you to run to your opponents so Flash is needed so you will have an escape mechanism when you find yourself outnumbered in the enemy’s territory.

The first point goes to  1st, Decisive Strike as a last hit aid or for early trades. Putting the first point into 3rd, Judgment is not recommended because you don’t want to over-shove your lane so early which might put you into a dangerous position.

Of course, invest a point in Demacian Justice whenever possible.

If Garen has not been struck by damage or enemy abilities within the last 5 seconds, he regenerates 1.2% missing Health per second.

Breaks free from all slows, becoming immune to them for 0.5 seconds and gaining 30% Movement Speed for 3 seconds.

The next attack within 3 seconds is empowered to deal 56 physical damage (30 +40% AD) and silence the target for 1.5 seconds.

Reduce damage taken 2 seconds. For the first 1 second(s), damage is reduced by 60% and Garen gains 60% tenacity.

Damage is reduced by 30% for the remaining duration.

Tenacity reduces the duration of most movement imparing effects.

Rapidly spin in a bladestorm for 3 seconds, dealing 31 physical damage (15 +25% AD) 8 times. Enemies hit by the bladestorm’s edge are critically struck for 125% damage.

Calls forth the might of Demacia to execute an enemy champion, dealing true damage equal to 150 plus 20% of the target’s missing health. Nearby enemies also take 50% of this damage.

Garen regenerates a percentage of his max health when he is not been damaged for a few seconds. His passive ability is very advantageous in early game trades because he can tank out blows only to regenerate it afterward. 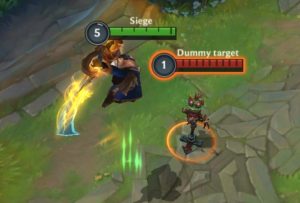 When Garen casts Decisive Strike, he becomes free from all slows, becomes immune to slowing effects, and gains a Movement Speed Bonus. He also gains bonus attack damage on his next attack that will also silence the affected enemy.

Decisive Strike is an auto-reset which means that Garen’s auto-attack will automatically reset and be available after casting this skill. This makes a strong trading combo because you can attack twice in quick succession. 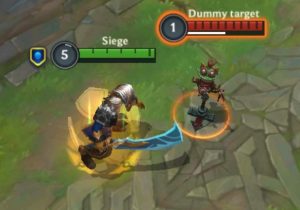 Courage grants damage reduction and tenacity. The effects are strongest for the few moments right after the skill so it is beneficial to cast it right before receiving damage. 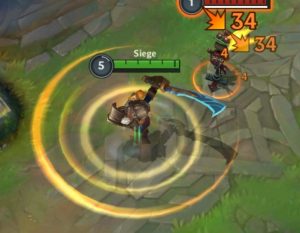 Garen rapidly spins in a bladestorm continuously damaging enemies around him. Those who are on the outer edge of the spin deal more damage.

This skill deals a good amount of damage. Use it whenever possible to damage enemies. You can cast Decisive Strike while spinning so you’ll have the bonus Movement Speed to keep yourself on top of your enemies.

Use wisely during the laning phase because you don’t want to shove your lane into the enemy tower because you would be endangered by being ganked. 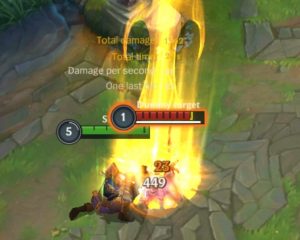 It takes some number of games to consistently know the right timing for execution but in your earlier games, you can use ignite along with your ultimate to secure your kill if Demacian Justice fails to execute your target.

It also deals quite a significant amount of damage to enemies around your target but it isn’t a reliable way to deal AoE damage.

Garen is a great early game trader against most melee Baron Laners due to the fact that he can easily regenerate the health he lost thanks to his innate passive.

Go for short trades using your 1st, Decisive Strike and 3rd, Judgment and use 2nd, Courage if the enemy tries to fight back.

Keep your trades short so you can recover your HP quickly. Then after recovering most of your lost HP, try to go in for a trade again.

Do not allow yourself to be poked so your passive regeneration will always be active.

Upon reaching level 5, try to put the enemy’s HP to around 50% before going for an all-in.

In the mid game and late game, you’ll be tanky enough with enough damage output but you have only kill potential for one enemy thanks to your ultimate, Demacian Justice.

Your main role right now is to protect your teammates and punish enemies who try to kill your allies.

If an enemy tries to dive your team, silence them using your 1st, Decisive Strike which will render them helpless and if you have allies nearby, the enemy will be most likely dead.

Due to Garen’s kit, beginners usually overextend and try to chase enemies. Do not do this as it will leave your teammates vulnerable to assassination. It is better to protect your teammates and allow them to carry you because Garen cannot carry games by himself.

If the enemy launches a powerful skill shot like Jhin’s Curtain Call. Use your 2nd, Courage and block the skill for your team.

Save your Demacian Justice on champions who are carrying the enemy team or those who are hard to kill like Dr. Mundo and Olaf.

It is highly recommended using Garen Wild Rift with the following champions as they synergize well with him.

Amumu delivers what Garen cannot. He has an almost instant gap closer, a single target stun, and an AoE crowd control. While Garen offers what Amumu cannot have. They also have great consistent AoE DPS and tankiness which makes them a painful duo to deal with.

Lulu can turn Garen into an unkillable hypercarry. Her 2nd, Whimsy solves Garen’s kitability issue and her ultimate, Wild Growth turns Garen large and tankier than ever.

In this section, we’ll tackle some of Garen Wild Rift Counters.

Fiora can outmaneuver, out-sustain, out-damage, and outplay Garen. A well-timed Riposte will render Decisive Strike or even Demacian Justice useless.

Darius has an extremely strong early game and his all-in is stronger than you. You have to play it safe and smart when against Darius and ask for your team to all-in on him before he can max his passive stacks because once he does, he can just dunk on your team one by one using his Noxian Guillotine while you can only try to dunk on him before he can do so.

Kennen is an extremely annoying Baron laner because he has a ranged attack, strong pokes, stuns, and mobility. Play it safe against him and try to freeze your lane under your tower. Do not die to him at all costs as he will snowball on your team. If you managed to survive the early game against him, you’ll be able to shut him down.

Here are some pros and cons if you are playing with Garen in Wild Rift.

FAQ's About Garen in Wild Rift

How good is Garen in Wild Rift?

Garen is a (Tier S) champion. He is a safe pick that can be used in most lineups. Garen is also very straightforward so he’s easy to learn and be put into competitive rank play in all tiers.

What role / lane should I play with Garen in Wild Rift?

Garen is a Baron Laner. He can survive and win short trades against most Baron Laners so he will most likely come out of the laning phase ahead of levels and items.

What abilities do I level up with Garen?

We get his 1st, Decisive Strike first as a last hit and dueling aid but Garen likes his 3rd, Judgment maxed first because it is his main source of damage. Get 2nd, Courage at level 3 as protection against all ins and of course get a point in your ultimate whenever possible.

What items should I build with Garen?

Black Cleaver is Garen’s core item as a bruiser. Sunfire Cape is a great option for beginners and Deadman’s Plate is great for mobility.

What Runes should I use when playing as Garen?

Garen’s Keystone Rune is either Conqueror if you are confident in your lane so the bonus damage will be handy but get Grasp of the Undying if you are playing a hard lane for the balanced effect of sustain. His other runes are Brutal, Hunter – Titan, and Hunter – Genius.

Once the enemy is 50% HP, use your ultimate and Ignite at the same time. That will usually do the work. Plus, play Garen over and over again so you’ll get the experience and feel to accurately use his ultimate.