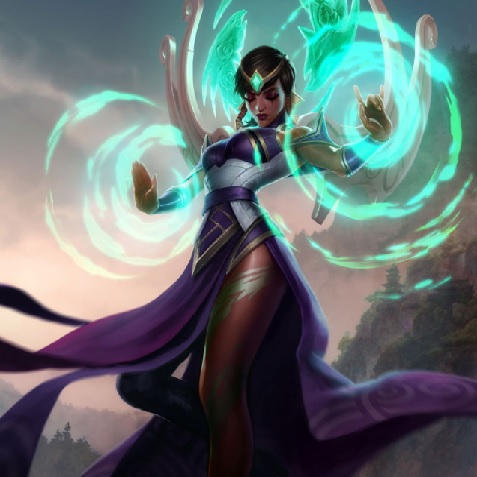 Best Karma build guide for Season 6 Patch 3.2 In Wild Rift. With our Karma guide you will learn which items to build, runes to select, skill order, and how to use Karma abilities properly.

Every spell cast grants Karma a stack of Mantra. At 3 stacks, she enters a state of Mantra, enhancing her next basic ability.

Mantra: Karma focuses her power, granting a 150 shield (150 + 50% Ability Damage) that decays over 4 seconds and 60% movement speed that decays to 20% over the same duration. An additional ring is generated around the shielded target, and the first ally champion who enters the ring will be granted the same shield.

Forms a ring of spirit energy at the target location. After 1s, it detonates, dealing 150 magic damage (150 + 60% Ability Damage) to all enemies inside the circle and slowing them by 50% for 1s. if enemies are hit by the outer ring, they will be knocked back toward the center.

Using abilities grants a stack of Mantra, which on stacking thrice enhances your next basic ability. On enhancement, the ability deals more damage and slows even further, giving you a chance to deal a massive amount of damage in an unexpected manner.

This ability on cast simply slows down your target for a period of time, enabling you and your allies to simply deal the damage they deserve. In addition, if the ability is empowered, it will help your allies to finish the opponents off in an easier way as it deals an additional wave of damage to the enemy in a given area.

Karma manages to bind up to a maximum of two enemies with her 2nd Ability for a short duration. After the binding time has elapsed, she then roots the target for a moment giving her an exemplary opportunity to further deal damage, slow, and cause more pain.

If her ability is enhanced, the ability deals more damage and roots for an additional 0.75 seconds, making it the perfect support ability.

The perfect quality any support can possess is the potential to save someone in need. Rather than being a ‘Damsel in Distress’, Karma prefers to shield others with this ability. Also, it grants a considerate amount of movement speed helping you to escape or to chase down an enemy who is running for his life. The best part is, if you use the ability after having 3 stacks of Mantra, you gain a massive burst of speed, making you one hell of a force to be reckoned with.

But that’s not it, if the stacks are up, and you used an enhanced 3rd Ability, you not only shield a particularly targeted ally but also the allies nearby if they get in the given range in a given amount of cooldown time, making this ability a perfect advantage in team fights.

The showstopper of the show is Karma’s dual-sided Ultimate. The main reason why Karma is crucial in team fights is that her Ultimate can affect the enemies in one of the two possible ways. One, if the enemies are in the center of her Ult, she is going to slow them for an eternity making them vulnerable to incoming damage from your allies. But on the other hand, if they are at the periphery of her Ult, she not only disrupts their movement but also springs them airborne pulling them back to the inner circle of her Ult.

This ability can be used to enable great Ultimate Finisher combos or to stall them to provide some time to your team while they are struggling to secure an objective. Also, upon casting of her Ultimate, she gains 3 full stacks of Mantra, enabling her to cast an empowered basic ability again, providing her an attempt to either finish off rest of the enemies or to save her dying fellows.

Here are Item Build Recommedations that works on Karma

Font of Life: As Karma has to constantly cast her abilities on the enemy champions to slow them down and gain a stack of Mantra, Font of Life becomes one of the best runes for that thing. Every attack by Karma, if followed up by the ADC, can restore a minimal portion of health, which in turn can save your life at times you won’t even imagine.

Aery: If you prefer going all out against mid laners with a damaging build, Aery can be the exact finisher you require. Once an enemy reaches critical health, Aery upon inflicting damage will confirm the kill no matter how far the enemy tries to flee.

Weakness: Since Karma possesses the ability to constantly hinder enemies’ movement, weakness can ultimately come into play every now and then, creating a great window again and again for her Allies to deal increased damage upon activation.

Adaptive Carapace: If you are planning to play solo, this rune will save your skin. Once your health drops below 50%, you will gain additional Armor and Magic Resistance helping you to deal more damage and suffer less pain.

Loyalty: A champion who has to stick around Ally champions all the time can activate nothing else but this rune. Being close to any ally gains you and your ally some additional Armor and Magic Resistance.

Manaflow Band: Being an AP champion, Karma will exhaust her mana upon abusing her abilities. But providing her with 300 additional mana will prove to be useful not only during the early game but also during turret holds and defenses against mana-less champions who are trying to run down your turret.

Flash: As Karma is squishy support who will perish if caught under a crowd control spell or if she is surrounded by multiple enemies, it is always handy to equip her with this spell so she can blink through walls and escape in no time.

Ignite: Being support who is dealing damage and assisting Allies, Karma can simply utilize ignite either as a finisher or as damage inflictor mid-fight, which can help the ADC or Assassin secure the kill. Additionally, it can be used to provide your ally true vision over the hideous stealthy enemies.

Exhaust: As Karma is already slowing and rooting enemies on their paths, Exhaust will make sure they don’t run away no matter what they do, making them the perfect First Blood without even trying.

The skill progression for Karma is totally situational and is based on enemy compositions. If there is a late game champion like Jinx but you have a massive damage dealer like Kai Sa or Draven, you can simply max out your 1st or 2nd Ability first while side by side upgrading your Ult and 3rd Ability.

On the very opposite, if you are matched against Ziggs or a burst champion like Xayah, it’s better to play a bit passive and let your ADC do the fighting part early game and keep supporting her with your 3rd Ability.

During the early game, as a support, your prime focus should be to keep your ADC alive while poking the opponents. Simply damaging and slowing them will be favorable but if you think you can take them out, make sure to use your 2nd Ability so that they hastily Flash away or more preferably die out of misery.

At this point in time, all you need to do is shield your allies, slow the opponents, and Tether them whenever you can while constantly damaging from the backend of the battle.

Jhin: After getting such a game-changing buff, Jhin is a powerful foe for every ADC. And the best support he can get is from a champion who can help him run, chase and finish. Karma being the best at it is one of the best synergy champs for Jhin.

Since Jhin requires some time to reload his guns, it is pretty frustrating to see the enemies get away during the early game, but not anymore. Karma’s 2nd Ability along with her 3rd will let no enemy get away.

Kai Sa: A champion who deals burst damage instantly has nothing to fear. And having Karma by her side, Kai Sa will literally annihilate the whole team securing a Pentakill in no time.

Darius: Getting constant shields, rooted enemies and movement speed is a good Darius’ wet dream. Having Karma by his side, this Noxian supreme will delete his opponents without a single moment of fear.

Olaf: Like any other mention against crowd control, Olaf always shows up. Olaf’s Ultimate is going to ignore all of Karma’s CC and eliminate her off the face of the Rift before she even gets to realize it.

Morgana: Morgana can simply use her 3rd Ability to shrug off Karma’s abilities like a piece of cake. She can additionally render Karma useless by constantly countering her abilities with her deadly shield.

Rengar: Since Karma can’t slow or root invisible enemies, Rengar’s Ultimate and his empowered 2nd Ability will make Karma feel pathetic in no time. The reason is pretty simple, his burst damage.

Here are some pros and cons if you are playing with Karma in Wild Rift.

How good is Karma in Wild Rift?

What role/lane should I play with Karma?

She is generally viable in the support and mid lane.

What abilities should I level up first with Karma?

You should max out 3rd Ability first if you need to constantly save your allies and then 1st Ability or 2nd Ability according to your requirement.

What items are to be built on Karma?

What runes should I use on Karma?

You may generally use Font of Life or Aery, Weakness, Loyalty, and Manaflow band.

Any tips to have a better game with Karma?

You have to simply keep saving your ADCs or other allies in the early game while making sure that you poke and slow the opponents. This way you will be able to scale your abilities. Once you have an advantage during a fight, you can go all in and ensure all the kills you want.