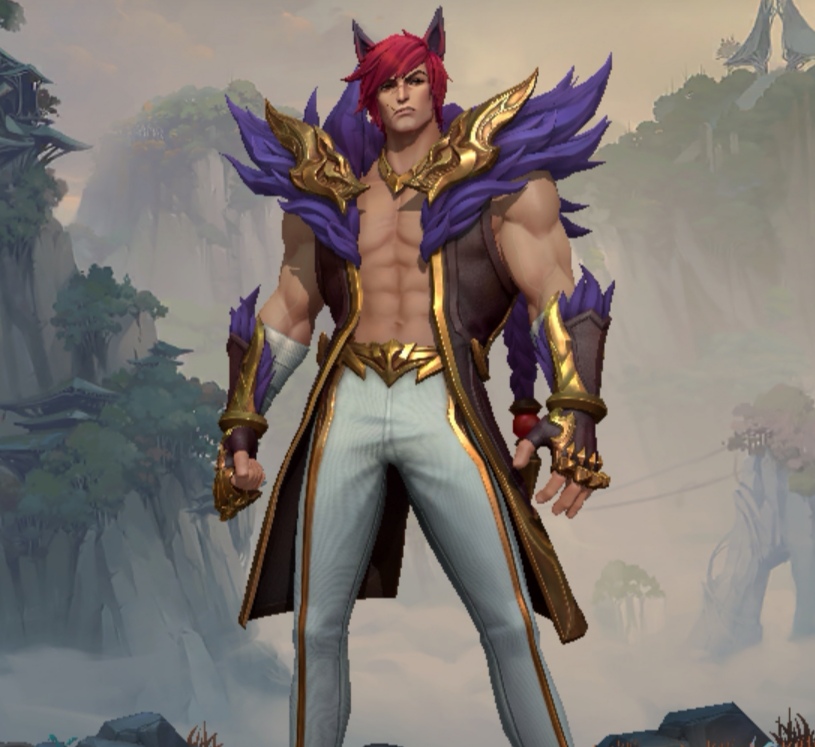 Best Sett Wild Rift build guide for Season 7 Patch 4.0 of WR. With our Sett guide you will learn which items to build, runes to select, skill order, who counters Sett, and how to use abilities properly.

Here are Item Build Recommendations that works on this champion and which are the best build for Sett Wild Rift in this patch.

This is our recommended Sett Wild Rift Build. For baron laners and bruisers, your must-have items shall include these for the armor reduction, damage based on target’s max health, and defense from having the last three items. Protobelt enchant on the other hand is great to catch enemies that are out of position.

In addition to these items, you may also opt for this Sett Wild Rift build if you are aiming for a splitpushing Sett. For splitpushers, Hullbreaker is a staple as it increases your damage against turrets. The rest of the item on the other hand improves your sustain while making sure that your damage can keep up.

Runes for Sett in Wild Rift

These two are the best spells you can equip for Sett Wild Rift.

Since Sett has to constantly engage in team fights and disengage, Flash will help him to rush out of fights or surprise enemy champions with a combo.

Sett has a great burst damage and can secure kills easily, scaring enemy champions on sight. Hence, Ignite is a viable option to turn to for securing evasive champions.

Learn your Q, Knuckle Down first to either start shoving lanes or to trade some initial damage. If there are ranged champions against you or you know you will be getting early ganks, get your E, Facebreaker first, to counter the ganks or to use it as a pull, allowing you to initiate a fight.

Max Q, Knuckle Down as soon as possible to gain a damage advantage over your opponent so that you can easily secure a kill whenever he makes a mistakes or you yourself prefer to go and perform an ‘All-in’ attempt in your lane.

Maxing W, Haymaker will enable you to quickly gain Grit and revert back an insane amount of damage during team fights in the early mid game. Maxing out W, Haymaker and E, Facebreaker alternatively is a matter of choice since it will allow you to get back into fights with a complete combo.

Sett itches for a fight, gaining 30% movement speed towards enemy champions for 1.5 seconds.

Additionally empowers the next two attacks to deal an additional 10 plus (1% + 0.01%) max health physical damage.

The additional damage is capped at 200 against monsters.

Active: Consumes all grit, gaining 100% Grit consumed shield decaying over 3 seconds. Sett then delivers a massive punch, dealing 80 plus 25% (25% + 0.1% bonus) Grit consumed true damage to enemies in the center (max 157 damage). Enemies not in the center instead take physical damage.

Smashes enemies on either side into each other, dealing 85 physical damage (50 + 60%) and slowing them by 50% for 0.5 seconds. If Sett grabbed at least one enemy on each side, all enemies are stunned for 1 second.

Grabs an enemy champion and suppresses them as he carries them forward, then slams them into the ground, dealing 200 (200 + 100% bonus) plus 40% bonus Health physical damage to surrounding enemies and slowing them by 99% for 1 second. Enemies take less damage the further they are from where Sett lands.

Sett can land two punches in a split second, starting with a left fist and switching to a right. The right fist deals slightly higher damage and can be utilized significantly to trade damage during the laning phase.

Additionally, the range of the right fist slightly extends for 2 seconds and hence can be a great deal for quick hits & runs. Meanwhile another significant passive is his health regeneration, which helps him to stay in the arena for a longer period of time against champions with healing abilities, during the early laning phase.

Upon activation, Sett’s next two consecutive attacks are empowered and deal an enormous amount of burst damage based on the champion’s Maximum Health. This ability grows stronger depending upon the amount of health the opponent champion possesses and can be a great way to snowball from early to mid-game.

Though the maximum damage is limited to 200 for jungle monsters, Knuckle Down can scale and give the ability to smash the opponents in a single combo during the latter part of the game.

The activation dispels the range changes induced by the Passive and equalizes the range for the empowered attacks.

The damage you take from various sources is stacked in the form of Grit and can be used to gain a timed shield that blocks upcoming damage and deal massive amounts of Physical and True damage.

Enemies in the center are inflicted with true damage and the lateral area of the ability lays out Physical damage. This ability is useful to avoid being one-shot while surviving team fights. On the contrary, squishy champions can be easily eliminated by carefully casting the ability while they are at the center.

Facebreaker can be the most annoying ‘non-ultimate’ Crowd Control ability of Sett. Casting this ability enables Sett to grab minions, monsters as well as champions present on his left and right sides. While it is already annoying as it is, it’s definitely icing on the cake when he pulls at least one champion on both sides or one champion and one monster on each side and, as the name suggests, mashes their faces together and stuns them, giving him the perfect opportunity to end the brawl before they even know what hit them.

This ability can be used to catch up to the enemies who are trying to flee from the battle after seeing you devastate their team members or to save your teammates from being taken out.

Sett can also pull enemies who are not on his flanks given that they are in melee range.

If by any means one is bored of winning in lanes easily and wants to spice up the game, this Ultimate is just the right way to do it. On casting, Sett becomes unstoppable, becoming immune to all slows and stuns, and takes flight with an enemy champion smashing him down with a bang, dealing a load of damage to the targeted champion and all the champions, minions, and monsters present in the nearby range. All the champions are slowed drastically upon taking damage and can fall prey to combos.

Upon aiming it towards a wall, the animation can be skipped and you can get back to performing combos in no time saving up a considerable amount of time. Also, low walls can be hopped over with an enemy champion, hence allowing Sett to seclude an enemy champion and ensure a flawless kill without interruptions.

It is the best course of action for Sett to use his Ultimate on the TANKIEST champion and smack him down near the squishy opponents to inflict greater amounts of damage to the enemy team.

Sett, being a melee champion is always susceptible to damage. Hence, securing the lane and farming for a proper fight is the best and most viable option. But again this will vary depending upon the type of gameplay the opponents are exhibiting.

If you think you can perform a good combo, simply use your E, Facebreaker to grab an enemy and start smashing him into the ground damaging him as much as you can while remembering to disengage at the right time.

Remember to use your W, Haymaker when you have a considerable to a good amount of Grit,  as using it in a hasty manner will only lose you time and the opponent might even leave without taking enough damage.

If you are at Baron Lane, simply keep trading damage and help the Jungler secure the scuttle. Once you are Level 5 and have your R, The Show Stopper, and the opponent has lost some health to your trades, perform your Ultimate and perform a _ combo.

If you have a good early and mid-game, meaning you have multiple kills and considerably low deaths, you can assist your team by dealing a destructive amount of damage during team fights with your Ultimate.

It is always best to perform Ultimates as an initiation for a team fight as most of the opponents will waste their CC on you, which will be negated by your Ultimate and will allow you and your team to have fewer slows and stuns hindering your performance.

During the late game, especially when the enemy is greedy, make sure you get into bushes and use a sweeper to counter-gank the enemies who are chasing you. Since you will be tankier than most and deal a humongous amount of Burst damage, you can One-Shot them in no time, given that you are most certain about killing them in one blow.

Additionally, listen to the calls if you are hesitant and always try to help the team by using your 3rd, Facebreaker to either save your team or assassinate your opponents.

It is highly recommended using Sett Wild Rift with the following champions as they synergize well with him.

Lulu’s R, Wild Growth will give Sett an enormous amount of support and help him stay in team fight way longer than usual, enabling him to rush into a 1v5 team-fight situation. Their combination will drain a lot of enemy abilities and then pave a path for your team to rush in and secure victory.

Kai Sa’s Q, Icathian Rain will be a great follow-up for a greater Burst-damage output, which can essentially lead to a Pentakill if done properly.

In this section, we’ll tackle some of Sett’s Wild Rift Counters.

Olaf’s Reckless Swing deals true damage and can counter Sett’s Ultimate with his own Ultimate which will allow him to continuously deal damage even if Crowd Control abilities are cast. Additionally Olaf’s Q

Irelia’s Bladesurge, allows her to counter Sett’s W, Haymaker by getting behind him. Also, her stacked Attack Speed will help her to quickly eliminate Sett.

Pantheon’s E, Aegis Assault will help him to shield against the true damage against Sett and let him get a disengaging opportunity whenever possible.

Here are some pros and cons if you are playing with Sett in Wild Rift.

FAQ's About Sett in Wild Rift

How good is Sett in Wild Rift?

In Wild Rift, Sett is (Tier S) champion. He is technically well balanced but the way he’s wreaking havoc, he’s being considered as broken.

What role/lane should I play with Sett?

You can either play Baron, Mid or Jungle as a viable option. Though in higher Elo, even Sett Supports are seen.

What abilities should I level up First with Sett?

You may Max Q, Knuckle Down, or W, Haymaker depending upon the type of champion you will be facing in your lane.

What items are to be built on Sett?

You can build a number of Physical and Defense items, core items being, B.O.R.K, Dead Man’s Plate, and Black Cleaver.

What runes should I use on Sett?

You may use Conqueror/Phase Rush, Triumph, Adaptive Carapace, and Sweet Tooth.

Any tips to have a better game with Sett?

You have to simply keep farming and acquiring kills while making sure you don’t overextend during the early game. During the mid and late game, your objective is to split push and/or secure as many kills as possible by using proper combos. Additionally, depending upon the situation you can use your Ultimate to smash the enemy on a high wall to cancel the animation and move on to dealing high damage.