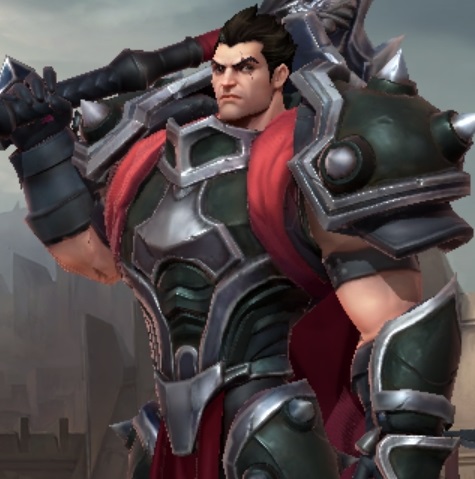 Best Darius build guide for Season 6 Patch 3.2b In Wild Rift. With our Darius guide you will learn which items to build, runes to select, skill order, and how to use Darius abilities properly.

Darius never hesitates once his axe is raised, those who stand against him can expect no mercy. Darius is a Baron lane bruiser who excels in bullying his lane and snowballing through his incredible damage output and infinite execution potential.

Upon reaching full stacks. Darius gains Noxian Might for 5 seconds. Gaining 29 Attack Damage and applying full stacks of Hemorrage instead of 1.

Empowers his next attack for 8 seconds to deal an additional damage (30% AD) and slows by 90% for 1 second.

Active: Pulls in enemies in front of him, slowing them by 40% for 1 second.

Killing the target with Noxian Guillotine refreshes its cooldown, grants Noxian Might for 5 seconds and causes nearby minions and monsters to flee for 1.5 seconds. 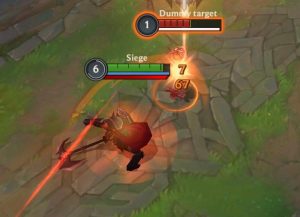 Darius’s auto-attacks apply Hemorrhage which makes enemies bleed dealing physical DPS. Hemorrhage can stack up to five times and once an enemy has max stacks, Darius gains Noxian Might.

You have to play bully during the laning phase with Darius because as the fight drags longer, you’ll deal more damage. Do not chicken out or think twice in the middle of the fight because you’ll lose out on the passive’s benefits which shine the more a fight goes on. 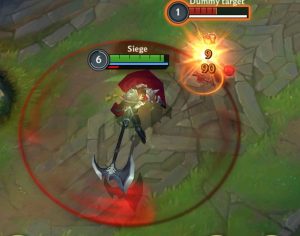 Decimate makes Darius deal physical damage to a circular area around him. Those hit at the edges receives more damage, heals Darius, and applies Hemorrhage. If Darius has Noxian Might active, he applies the full stack of Hemorrhage to enemies hit by the edge.

There is a cast delay to this ability which makes it a bit hard to hit and the delay also gives the enemy time to react to it and avoid it using their mobility abilities. To counteract this, use Decimate after slowing the enemy through 2nd, Crippling Strike or 3rd, Apprehend.

A good Baron laner or once the enemy dies to you once or twice, they’ll play extra careful around you. When this happens, you can use Decimate to deny your enemy’s last hits. Do this especially when they’re going for the cannon minion.

Decimate + Flash is a good way to quickly damage multiple enemies and apply Noxian Might to them. Use Flash at the very last millisecond before Darius swings his axe because the better you time it, the less chance for the enemy to react to you. This is also a good way to proc a large amount of heal by hitting multiple opponents.

In skill matchups, e.g. Fiora, Jax, Vayne, they will try to engage you if you fail to hit Decimate so spamming this ability is highly discouraged. 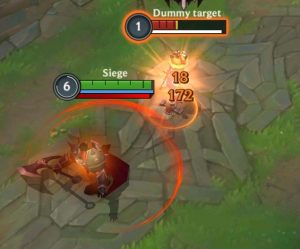 Crippling Strike is an auto-attack reset which means that you won’t have to wait for your attack to refresh after casting this ability. It makes your next attack deal extra physical damage and it also drastically slow down the target for a second.

Crippling Strike is a great farming tool because its cooldown is reduced in half and the mana cost is refunded if you killed the enemy using this ability. The auto-attack reset function is also a good way to “salvage” last hits you mistime. 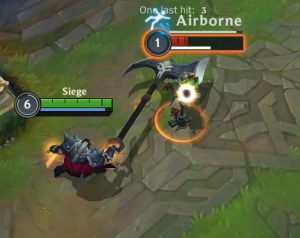 Apprehend is your gap closer. It pulls all enemies in the target duration. Enemy champions cannot hide behind their minions because they are going to be pulled together with it. Be careful though, minions in wild rift deal significant damage especially in a slow pushed wave.

this ability also grants a passive armor penetration bonus which makes you scary effective against tanks.

Apprehend can sometimes interrupt dash abilities due to the fact that it cannot be stopped. Use it to stagger and outplay those who try to initiate on you.

You can do Flash + 3rd with Apprehend but it has an extremely time window to do it. I recommend reserving your flash your 1st + Flash if an opportunity for multiple kills is available. 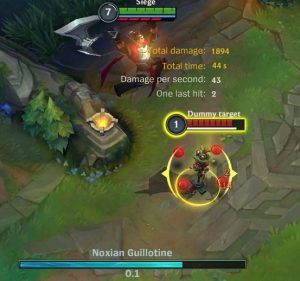 Noxian Guillotine is Darius’s signature move. It allows him to dunk on his enemies, executing them, one by one. This ultimate deals true damage which increases based on the number of Hemorrhage stacks the target has. If the target is successfully executed, nearby minions and monsters flee in terror, and this ability’s cooldown is reset.

A foolproof way to guarantee that Noxian Guillotine will execute the enemy is to be aware of its damage by long-pressing the ability button or by accessing it through the scoreboard. Multiply it by two and you’ll get its maximum damage. (In the picture, Noxian Might is active by the way.) Look at the enemy’s HP value before casting and you’ll have a sure execution every time. And yes, this way takes too long in terms of “real-time split-second decision making”. This is for absolute beginners and do not worry, you’ll get used to the feel of it in no time and you’ll be doing pentakill dunks before you know it. 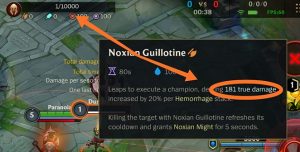 You can buffer Noxian Guillotine to make it cast faster by using Flash. This is a good way to kill fleeing enemies. You have to do it extremely quickly, though. And I’ve found that it doesn’t work sometimes if you are holding the directional button while doing Ult + Flash.

Here are Item Build Recommedations that works on Darius

This is the standard build for Darius which is a mix of offensive and defensive items but it is leaned towards an offensive playstyle. This build should be used if you are confident in your match-up and you are winning your lane.

This item build is a good alternative if you are against a matchup you are not confident with. If you are losing, switch to this build as well. This build is the recommended one for beginners.

Ghost is preferred over Ignite because it helps with Darius’s main issue which is his weakness against Kiting. Ignite is strong only in the early game but Ghost helps Darius in all stages of the game as it allows him to force fights and make plays as he will.

Flash is great on Darius because it is a safety net for him because he has no mobility tool or disengage tool. It can also be used to make surprising offensive plays.

1st, Decimate, is maxed first because it is your main source of damage.

2nd, Crippling Strike, is maxed last because it is mostly used as a source of slow more than a source of damage. Get a point in your

Darius is an early game bully. If he wins his early game, it transitions to a Darius carrying the mid-game.

In order to win the early game, you have to take a dominant stance in the laning phase. This is easy to do against tanks and fighters and is still possibly against long-range Baropn laners, although a bit harder to do.

First, you have to freeze the lane and zone the enemy out. You will be able to do this by only hitting minions at their very last health and staying behind the enemy minions. Only use 1st, Decimate when the enemy laner attempts to last hit minions, especially the Cannon minions so they will be set back in gold.

If the enemy laner forces a fight or tries to last hit a Cannon minion, slow them down with 2nd, Crippling Strike first if possible so you can pull them back with 3rd, Apprehend once they try to escape using their flash. Once this happens, you’ll have complete control of your lane.

When fighting against ranged champions, use Darius’s basic combo which is using 3rd, Apprehend first so you can chip their HP little by little then all-in on them once they are around 60% HP.

In the mid game, Darius is an absolute monster. Once you have max stacked Noxian Might, you simply have to use 1st, Decimate to apply the stacks, and then use your ultimate, Noxian Guillotine one by one to your unlucky opponents.

In the late game, Darius falls off because enemies usually stick together by this time and they will try to burst you down before you are able to acquire your full stacks.

What you have to do is to stay with your team together and focus on the enemy’s tank. The tank will serve as the champion who will give you your stacks. Once you have your maxed stacks, go on the aggressive and apply your mark on all your enemies.

Jarvan IV is a good jungler who has good early game ganking potential which can help Darius snowball early in-game. His flag, Demacian Standard, increases attack speed which is scary on a Darius with Noxian Might. He also scatters enemies due to his ultimate, Cataclysm, and a scattered team is free real estate for Darius.

Corki’s Special Delivery is a potent crowd control capable of scattering the enemy team and keeping them apart due to its extreme slow effect.

Vayne is a kiting god in the Baron lane and that is exactly Darius’s weakness. She will hit you every time you’ll try to last hit minions and she will just push you back if you attempt to engage on you. Playing defensively is not an option as well because she’ll out-scale you. Try to look for opportunities where she messes up and ask for ganks. Don’t die and don’t get pinned to the wall because you’ll definitely die if she lands her condemn on you.

Garen is Darius’s number one enemy in the Baron lane. They are similar champions but right now, Garen has an edge because he is more capable on short trades and his passive allows him to regenerate his lost health quickly. On the other hand, Darius loves extended trades so if the Garen player is smart, he will use his abilities to dictate the pace of the laning phase. If Darius can force extended trades though, he has a higher chance of winning the matchup.

Here are some pros and cons if you are playing with Darius in Wild Rift.

How good is Darius in Wild Rift?

Darius is a (Tier S) champion. Darius is an early game bully in the Baron lane capable of easily defeating most of his Baron lane counterpart. If he wins his lane, he can easily dictate the pace of battle in the whole of the mid game.

What role / lane should I play with Darius in Wild Rift?

Darius is played in the Baron lane as an early game bully. He can also be played in the mid lane and as a jungler in specific matchups.

What abilities do I level up with Darius?

1st, Decimate, is maxed first because it is your main source of damage.

2nd, Crippling Strike, is maxed last because it is mostly used as a source of slow more than a source of damage.

What items should I build with Darius?

What Runes should I use when playing as Darius?

Conqueror synergizes well with Darius’s passive, Noxian Might because both are maxed at 5 stacks and once both are maxed, Darius becomes a much scarier champion. His other runes are Brutal, Hunter – Titan, and Sweet Tooth.

How can I make multiple dunks with Darius's ultimate, Noxian Guillotine?

The key to making successive dunks are to maximize first his Noxian Might stacks and to make sure that enemies are marked with his passive first before using his ultimate, Noxian Guillotine on them. Each stack of Noxian Might increases the damage of Darius’s ultimate by 20% so a maxed stack, especially through 1st, Decimate will make it easier for Darius to execute his enemies.