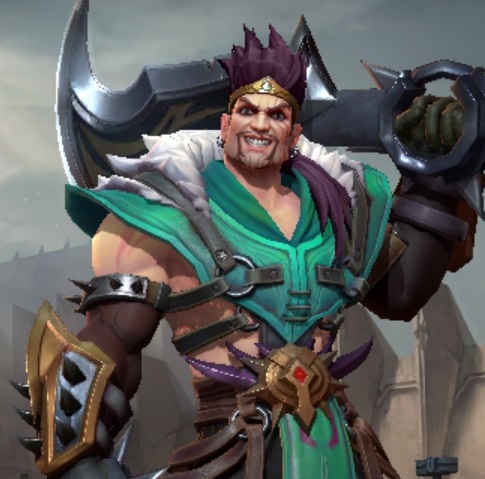 Best Draven Wild Rift build guide for Season 7 Patch 4.0 of WR. With our Draven guide you will learn which items to build, runes to select, skill order, who counters Draven, and how to use abilities properly.

Draven has a flair for the dramatic, and his unparalleled skill with his spinning axes. Draven is an aggressive early game marksman who snowballs his game through aggressive plays and by styling on his opponents. Draven is not for the faint-hearted farming type players because he needs to be aggressive and win his lane to win the game.

Here are Item Build Recommendations that works on this champion and which are the best build for Draven Wild Rift in this patch.

This is the standard build for Draven which grants high amounts of DPS through your critical damage and it also grants a good amount of sustain from the physical vamps.

Mortal Reminder. If you are snowballing, you can build it first but beware as it will make you a glass cannon capable of one-shotting but at the same time, you are vulnerable to being one-shotted as well.

Runes for Draven in Wild Rift

Flash is the most versatile summoner spell that grants a lot of offensive options to Draven, most notably the 3rd + Flash and Ult+ Flash and it allows Draven to escape dangerous situations because he lacks a disengage tool.

1st, Spinning Axes, is maxed first because it is Draven’s main source of damage.

3rd, Stand Aside, is obtained at level 2 because most supports have a level 2 has a power spike you can abuse for an early kill but you’ll max it last because it doesn’t have better scaling than your two other basic abilities.

2nd, Blood Rush, is maxed second so you can maximize your DPS in the mid-game. You should always get a point in your

Killing a unit or catching a Spinning Axe grants a stack of Adoration.

Killing champions grant 80 bonus gold, plus 4 per stack of Adoration.

when Draven dies, half of Adoration stacks are lost.

The Spinning Axe bounces off the target, allowing Draven to catch and regain it.

Draven can hold two Spinning Axes at once.

Hurls two massive axes, dealing 200 physical damage (200 + 110% bonus AD). The axes return to Draven when they reach the edge of the map, hit a champion or upon reactivation.

Deals less damage as it damages targets, minimum 40%. Upon reversal, the reduction is reset to full damage.

This passive is part of what makes Draven snowball hard. Along with his natural early game strength, once he gets one kill, it becomes easier to get another kill because of the bonus gold. The gold bonus from a first blood in Wild Rift is massive, so strive to get it in your games. But of course, don’t die trying too hard to do so. Convince your support to pick an aggressive champion as well. Blitzcrank, Alistar, Leona or Braum are currently the best champions to play aggressively with. 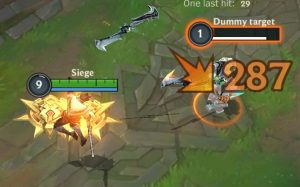 Spinning Axe is the trademark of Draven’s play style. It allows him to infinitely juggle up to two axes at the same time. These axes grant massive bonus damage to Draven’s attacks but it has a catch that you have to catch the axe as it goes back or else you’ll lose the bonus.

The most important thing to learn about Spinning Axes is that the axe will fall towards or near the direction Draven is facing at the moment the axe hits the enemy. This is important for three main reasons:

There is a two axe limit but if you have a high enough attack speed, you can actually juggle more than two at the same time. 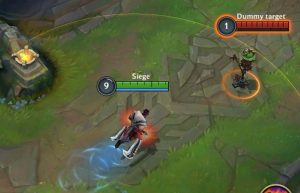 Blood Rush grants additional attack speed and movement speed for a short duration. Its cooldown is reset when you catch your axes which makes it possible to make it a nonstop buff for Draven.

Activate Blood Rush then catch an axe, then activate it again. It doesn’t consume that much mana. You’ll mostly need to buy an item even before needing to go back because of a drained mana pool.

Spam it before they nerf it and make it cost more mana or make Draven’s mana regen lower like what they did to Ezreal. 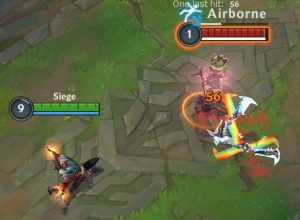 Stand Aside is Draven’s soft crowd control. It damages and knocks enemies hit to the side and it also slows them briefly afterwards.

Do an Auto-attack – 3rd – Auto-attack combo to finish off your opponents. The airborne effect will prevent them from fighting back or escaping your finishing blows.

If you want to use Stand Aside to ensure that the second portion of Whirling Death hit your target, you’ll succeed more often by hitting the far side or opposite side of your target. 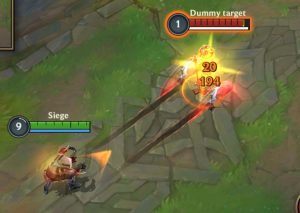 Whirling Death is a global range nuke that damages enemies twice, once going to and another on its way back.

Do not hesitate to use on enemies near you to burst them do death. You can do a Flash buffer and make Whirling Death cast faster by doing an Ult + Flash combo. You can also use Flash to position yourself next to another enemy champion before your ultimate returns to you but only do this if you are confident that you will kill that champion because you’ll lose your escape tool by doing that.

You will also have a higher chance of hitting both instances of Whirling Death’s damage by re-casting it before it hits the enemy.

Draven’s playstyle is carrying from the get-go. You’d want to pair yourself with a competent engage support like Alistar or Leona so you can assume an aggressive stance as early as level 2.

If the enemy ADC enters your attack range to last hit minions, punish them with your auto-attack. If the enemy support tries to zone you or your support, hit them as well. Remember, your 1st, Spinning Axes hits like a truck even if you’re just level 1.

Always look for opportunities to kill together with your support but never take unnecessary risks because if you die even just once, you’ll cut your chances of carrying the game by half.

If you get killed in the early game, do not worry as you can still come back. Focus on building up your Adoration stacks so you can bag lots of gold once you secure your first kill.

In the middle to late game, you’ll be dealing tons of damage with each hit if you managed to snowball your lead. But beware, Draven is a fairly immobile champion so you are still easy to kill when jumped on even if you are ahead.

Never roam around the map alone because you are an easy target of assassins and since you have snowballed, most likely, you’ll be carrying a lot of bounty gold which will enable the enemy team to have a chance for a comeback against your team.

In team fights, go front-to-back. Use your auto-attack against whoever is in front of you. You can even melt tanks with your extremely high auto-attack damage thanks to Draven’s 1st, Spinning Axes.

Alistar is an amazing initiator who can play aggressively in the early game because of how strong his level 2 and level 3 combos are. With his crowd controls and passive sustain, it is easy to play as a bully lane in the early game. He can also provide all the peeling needs of Draven throughout the game.

Blitzcrank remains as one of the top aggressive supports in the game and when combined with Draven’s strong early game, he becomes even more dangerous. This duo can snowball disgustingly hard if given one or two kills in the early game and they can easily turn those single digits kills into double digits deaths for the enemy team.

Jhin can deal as much damage as Draven at all stages of the game but he has the range advantage over Draven. His traps are spammable that it can be placed all over the lane to restrict Draven’s juggling capability.

Braum can heavily restrict Draven’s snowballing because he is an amazing peeler who can protect his ADC and other teammates from Draven’s early aggressiveness.

Here are some pros and cons if you are playing with Draven in Wild Rift.

FAQ's About Draven in Wild Rift

How good is Draven in Wild Rift?

Draven is a (Tier S). He can carry games with his snowball-oriented playstyle but since he is snowball reliant, he is not as consistent compared to other S-tier ADCs.

What role / lane should I play with Draven in Wild Rift?

Draven is a marksman played in the Dragon lane. He is an ADC who is strong from level 1 so he has the advantage that he is not as item-reliant compared to his counterparts. He can carry games easily if he is allowed to have a few kills in the early game.

What abilities do I level up with Draven?

1st, Spinning Axes, is maxed first because it is Draven’s main source of damage. 3rd, Stand Aside, is obtained at level 2 because most supports have a level 2 has a power spike you can abuse for an early kill but you’ll max it last because it doesn’t have better scaling than your two other basic abilities. 2nd, Blood Rush, is maxed second so you can maximize your DPS in the mid-game.

What items should I build with Draven?

Death’s Dance allows Draven to ignore incoming damage while he juggles his axes and deal major damage to his enemies. Afterwards, rushing Infinity Edge is always the best option to maximize his damage output into the mid game.

What Runes should I use when playing as Draven?

Conqueror grants bonus damage that revs up the more instances of damage you do and it gives a flat 10% on max stacks which is a pretty big deal. Getting the max stacks is easy on Draven because of his superior kiting ability. His other runes are Brutal, Regeneration, and Sweet Tooth.

How do I juggle the Q, Spinning Axes properly?

You can control where the axes land by making Draven face the direction where you want the axes to land. Learning this mechanic and engraving it into your muscle memory through practice is crucial to carrying games with Draven.