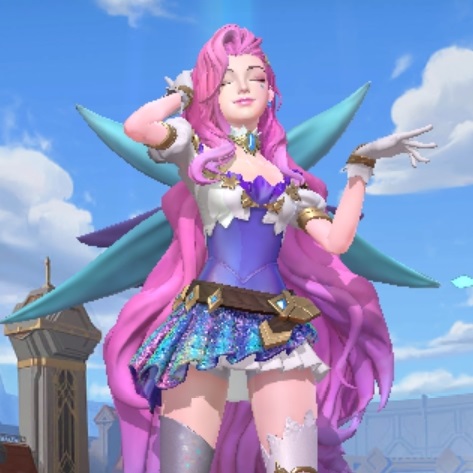 Best Seraphine Wild Rift build guide for Season 7 Patch 4.0 of WR. With our Seraphine guide you will learn which items to build, runes to select, skill order, who counters Seraphine, and how to use abilities properly.

Seraphine is the premier star in both Piltover and Zaun. Empowered by her gifts and her hextech, she amplifies the voices of all with a fresh force of optimism. They inspire her, and she will do her best to inspire them in return. Seraphine is a long-range mage/enchanter hybrid who brings an amazing amount of damage and utility to team fights.

Here are Item Build Recommendations that works on this champion and which are the best build for Seraphine Wild Rift in this patch.

This is the standard Seraphine Wild Rift Build in the mid lane that focuses on increasing her cooldown reduction then her damage output.

This is the Support Seraphine Wild Rift Build which boost her defensive utilities.

Runes for Seraphine in Wild Rift

These two are the best spells you can equip for Seraphine in Wild Rift.

Seraphine is an offensive-oriented long-range nuker and Ignite allows her to kill off opponents that would be able to get away without it.

Flash is a must on Seraphine because she is an immobile champion who is very vulnerable in close-range combat.

1st, High Note, is maxed first as it is Seraphine’s main source of damage. 3rd, Beat Drop, is maxed second to scale its damage and cooldown. Lastly, 2nd, Surround Sound, is maxed last. Although, if you feel that your team is dying often, it might be better to prioritize 2nd, Surround Sound, for the additional sustain. Get a point in your ultimate whenever possible.

Harmony: Casting an ability grants a Note to nearby allies for 5 seconds. For each Note, Seraphine’s next attack gains 0.3 Attack Range and deals an additional 4 magic damage (4 + 4% AP).

Reaches maximum damage when the target is below 25% health.

If Seraphine is already shielded, nearby allies are healed for 5% of their missing Health (5 + 0% AP), increased by 50% for each ally.

Spell extends when it touches an ally or enemy champion. 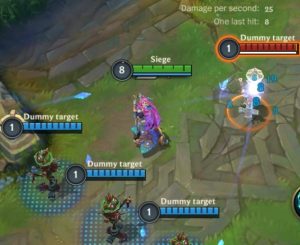 Every third basic ability of Seraphine echoes, or casts twice. It brings additional damage and/or additional utility to her abilities:

Her ability icons change depending on how many stacks of Echo she is carrying.

The picture above is the secondary innate passive of Seraphine which is Harmony. Every time she casts her abilities, allies near her are granted a Note. Each note increases Seraphine’s attack range and makes her deal extra magic damage. Her team can carry a maximum of 20 notes at a time. Remember to auto attack once in a while to activate and deal additional damage with the notes.

As of Patch 2.5, Seraphine immediately gets max Echo stacks so she can immediately echo one of her abilities in case of an early fight or a death brush strat. It is recommended that you get Seraphine’s 3rd, Beat Drop if you plan to fight before the first wave. 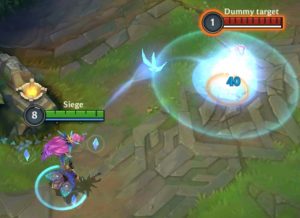 High Note is Seraphine’s main damaging ability. It is an execution ability which means that it deals more damage the lower the enemy’s HP is. When echoed, High Note is a potent nuke.

Be careful when using the ability during the laning phase if you are playing as a support because you might kill the minions with High Note and steal the gold that should be for your marksman.

High Note is best echoed in finishing fights because of its execution damage scaling. But remember to give the kill to your marksman when possible. 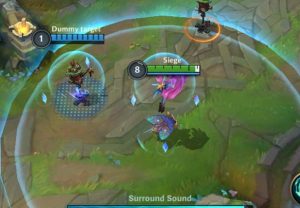 Surround Sound is Seraphine’s defensive utility spell. It grants a shield and a movement speed bonus for all allies in an area around Seraphine.

When echoed, Surround Sound heals all allies in the vicinity and the number of heal increases based on all ally’s missing health. The lower the health of your allies, the more effective Surround Sound’s healing becomes.

Locket Enchant. Do not activate the locket and echo because it will not make Surround Sound heal twice. 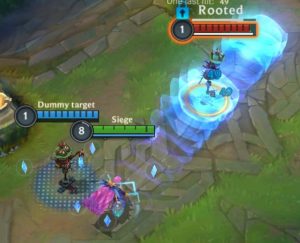 Echoing Beat Drop is a good initiation tool because it will root enemies who will get hit twice.

The slow doesn’t have to be from Seraphine to convert the CC into a root. Charm from Seraphine’s ultimate (and also not from her) is considered a slow and those hit by her ultimate then Beat drop will be rooted, or stunned if echoed.

Shadows Enchant. Although, it is not a very reliable initiation tool because the ghost from the shadows enchant moves slowly. 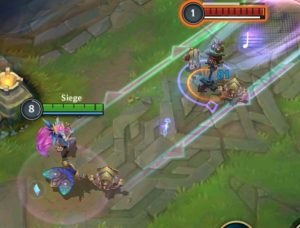 Encore is a unique Charm ability as it has a deceptively long range thanks to the fact that it extends for every ally and every enemy hit so in theory, it has unlimited range but each champion, ally or enemy, can only extend Encore once.

Untargetable allies will extend Encore but untargetable enemies would not.

Because of Encore’s extending nature, it can be used as an initiation tool from way back using your allies as a bridge to reach enemies from afar.

Encore does not activate echo nor give it a stack.

Echo will activate on 3rd if you have 2 stacks.

Echo will activate on 2nd if you have 1 stack.

Echo will activate on 1st if you have no stacks.

Seraphine is a poke-type enchanter so she has a fair advantage in the laning stage as long as she is careful.

Avoid using  3rd, Beat Drop to harass opponents. It is best used as a deterrent to keep your enemies from getting close to you and for securing kills once your target is low enough to finish off with one combo.

If your mid-lane counterpart goes to gank a side lane, do not directly follow them using the same path they used because they might wait for you inside a brush. Seraphine is a squishy champion who will easily die when jumped inside a brush.

Instead, clear your lane fast and try to make a play on the other side of the map or if it is pushed in, go the long way through your own jungle to be safe.

In the late game, Seraphine’s ultimate, Encore is a game-breaking move that can devastate the whole enemy team. It can charm all of your enemies and through an Echoed 3rd, Beat Drop, you can follow it up with a stun.

Encore is great when trying to initiate on enemies taking Baron or drakes. If you are playing as a mid laner, an Echoed 1st, High Note also has a high chance of stealing Baron or drakes because its damage increases the lower the affected enemy’s HP becomes.

Seraphine has a naturally low max HP so always be mindful of your positioning. Always stay behind your team so that you’ll be able to survive and contribute to your team.

It is highly recommended using Seraphine Wild Rift with the following champions as they synergize well with her.

Ashe’s Frost Shot constantly slows down enemies so your Beat Drop will always root and stun your enemies. They are also perfect lane partners as they are both long-range champions who can damage enemies and farm safely from a distance.

In this section, we’ll tackle some of Seraphine Wild Rift Counters.

Rengar’s kit is an extremely deadly threat to Seraphine. He can easily dive him in the backline thanks to his ultimate, Thrill of the Hunt, and his empowered 2nd, Battle Roar can dispel all of Seraphine’s crowd controls.

Here are some pros and cons if you are playing with Seraphine in Wild Rift.

FAQ's About Seraphine in Wild Rift

How good is Seraphine in Wild Rift?

Seraphine is a (Tier A+) champion. She is a strong mid-lane and support pick if your team already has sufficient front liners. She can deal so much damage and crowd control from the back lines.

What role / lane should I play with Seraphine in Wild Rift?

Seraphine is played as a mid-lane APC or as a poke-type enchanter support. She is a mix of an artillery and control mage because she deals a lot of damage while being able to slow, charm, root, or stun enemies.

What abilities do I level up with Seraphine?

What items should I build with Seraphine?

When playing as a mid laner, Luden’s Echo and Awakened Soulstealer is important for Seraphine. Luden’s Echo increases her poke damage in the early to mid-game and Awakened Soulstealer reduces the extremely long cooldown of her ultimate, Encore. When playing as a support, you can opt to by Harmonic Echo to increase her healing and Ardent Censer to grant a damage and attack speed buff to your allies,

What Runes should I use when playing as Seraphine?

Electrocute allows you to easily burst down a single target while Aery grants a consistent damage boost plus it increases your shielding value when using 2nd, Surround Sound. Her other runes when playing as a mid laner are Brutal, Spirit Walker, and Sweet Tooth. As a support, Weakness, Loyalty, Pack Hunter.