Best Gwen Wild Rift build guide for Season 7 Patch 4.0 of WR. With our Gwen guide you will learn which items to build, runes to select, skill order, who counters Gwen, and how to use abilities properly.

A former doll transformed and brought to life by magic, Gwen wields the very tools that once created her. Gwen is an assassin-fighter who maneuvers through her opponents with a mix of snips, slashes, and needles.

Here are Item Build Recommendations that works on this champion and which are the best build for Gwen Wild Rift in this patch.

Gwen is a scaling champ that heavily relies on items that grant ability power and attack speed. Nashor’s Tooth gives attack speed necessary for her to inflict more autoattacks in a certain duration, and Lich Bane for the bonus magic damage on-hit. The rest of the item provides additional magic damage and magic penetration. This is the best build for Gwen in Wild Rift.

Riftmaker is a must-have item for AP carries such as Gwen for her build in Wild Rift. Gwen is not as tanky as the rest of the bruisers. That said, she may require an item that can further enhance her survivability during skirmishes. Resistance and the untargettable state she receives from Hallowed Mist is barely enough, especially in team fights where you are only a few inches away from your opponents. Luckily, Riftmaker is at her disposal, increasing her magic damage while giving her additional health, ability haste and omnivamp.

Runes for Gwen in Wild Rift

Gwen’s game style comprises chains of auto-attacks between abilities. This makes Conqueror the perfect keystone for Gwen, as each attack provides stacks that grant her increasing adaptive damage. Triumph and Conditioning allow her to stay longer in skirmishes by the health restoration after takedown and gradually increasing resistance. Demolish, on the other hand are good for splitpushers.

These are the best spells that must be equipped for Gwen in Wild Rift.

Wild Rift Gwen is a melee champion who may have a hard time fighting against ranged champions. Gladly, there is a spell that can increase her mobility for situations like this, and that’s thanks to Flash.

The Hallowed Seamstress benefits from the effects of Ignite. Aside from the additional damage, she can take advantage of during duels and team fights, Ignite also reduces the incoming healing they would get. This is especially useful against champions with healing ability and lifesteal such as Dr. Mundo, Darius and Olaf.

Gwen in Wild Rift can start off by picking her first ability, Snip Snip or Skip ‘n Slash. However, it is more suitable for her to choose Skip ‘n Slash first for an empowered basic attack, bonus magic damage on-hit, attack speed, and attack range.

Maximize and enhance Snip Snip! first as most of her damage would rely on the combinations of snips and auto-attack. Next would be her Skip ‘n Slash and lastly, Hallowed Mist as it is her least source of damage.

It is also crucial to make sure to upgrade your ultimate as soon as it’s available which is at level 5, 9 and 13.

Deals a max of 5 magic damage (5+5% ability power) against monsters.

The center of each strike deals true damage instead and applies Thousand Cuts.

Summons the Hallowed mist, making Gwen untargetable to enemies outside the zone while inside. Gwen gains 11 (11+5% ability power) armor and magic resist inside the mist.

The mist will move to Gwen the first time she attempts to leave.

The first enhanced attack to hit an enemy refunds 20% of this ability’s cooldown.

First Cast: Hurl a needle that deals 30-60 magic damage (30+8% ability power), slows by 30% for 1.5 seconds, and applies Thousand Cuts to all enemies hit. Needlework can be re-cast 2 additional times.

The Hallowed Seamstress highly depends on her passive allowing her to deal damage depending on the target’s maximum health, making her a good option against tanks. Thousand cuts is applied by on-hit attacks, center of Snip Snip! and Needlework. 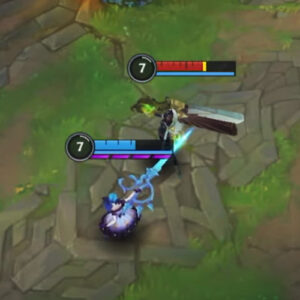 Simultaneously, Gwen can heal herself after dealing damage against champions.

Gwen snips in a cone to deal magic damage to the enemies hit by her weapon, with the final snip dealing increased damage. The center of the Snip Snip! applies Thousand Cuts and converts 50% of her damage to true damage. That said, if you are in a duel against a tank, make sure to hit the center part of your snip. 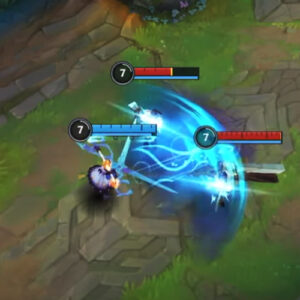 Basic attacks also grant a stack of Snippy for up to 4 time within 6 seconds, that she can consume to snip for an additional time. Before using this ability on your opponent, make sure to stack it up to four first by either landing autoattacks on your enemy or on minions.

Gwen calls for a circular area called the Hallowed Mist on her location for 4 seconds, and can be recast at will and if Gwen leaves the area.

While she’s within the range of the mist, she gains extra resistance and armor. And the best thing is that she becomes untargettable to all enemies that are outside the mist. Ranged champions cannot inflict damage unless they enter the mist, within Gwen’s attack range. 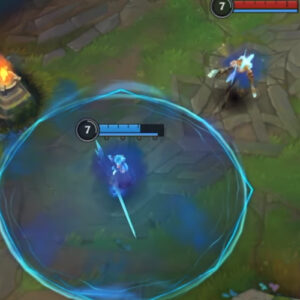 Hallowed Mist has a long cooldown so think twice before putting it up and avoid using it in random situations.

It is also important to take note that the Hallowed Mist can block attacks from outside the mist only for herself. For instance, Ashe’s ultimate would only pass through Gwen and the mist, but it will still hit any allies on its path.

Gwen’s third ability is a short dash that she can utilize to blink to a target location or over thin walls around the map. A gap-closer that solves her problem as a melee champion. At the same time, using Skip ‘n Slash grants an empowered basic attack, bonus magic damage on-hit, attack speed and attack range. 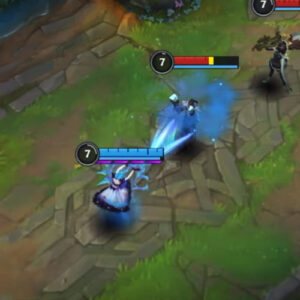 Make the most out of your skip ‘n slash by using it in between your abilities.

Gwen unleashes a needle towards the target direction after triggering Needlework, which she can cast up to three times within six seconds. There is a small delay in between and the number of needles increases by 2 for each cast. These needles inflict magic damage and slow, which she can take advantage of for her melee attacks. 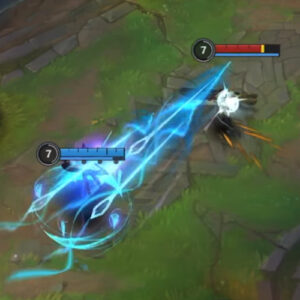 However, there is a condition that must be met before recasting Needlework. Recast button will only be available after using autoattack or a Snip Snip. This may become difficult, especially when using it against a ranged champion, so make sure to hit the previous Needlework for the slow or dash using Skip ‘n Slash.

Wild Rift Gwen has a strong lead at level 1 with Skip ‘n Slash. This ability provides additional damage, attack speed and range allowing her to land a few auto-attacks shredding a significant portion of their health. But, she then becomes less powerful post-level 5 so be careful with trading.

During this phase, try not to push the wave towards your opponent as Gwen can be vulnerable to ganks. Instead, make an attempt to land your fully-stacked Hallowed Mist (Q).

Only initiate if it is safe to do so, and wait for your ultimate as this is where she would reach her power spike.

She can opt to split push and obtain lead while pushing minion waves and eventually seize turrets for her team. As soon as she’s able to get her hands on her ultimate, Gwen can easily win duels in the side lanes without sweat.

During the late game, it is optimal to stick with her allies for team fights and skirmishes. Wild Rift Gwen can position herself in the front inside the Hallowed Mist for extra resistance. At the same time, ranged carries may not be able to land attacks on her while it’s up unless they’re inside the mist.

Overall, Wild Rift Gwen benefits from champions who can either help her gain her lead during the laning phase, or one who can initiate teamfights.

Leona shines best at initiating skirmishes and landing one crowd control after another. Leona can join Gwen in the front line and utilize her stuns and roots for her team.

Gwen struggles on her own post-level 5 and may have a hard time winning the lane, especially on a bad matchup. In this case, any jungler who can gank early with good cc can do the right job. This includes Vi who can easily surprise her opponent with a dash and a punch.

Think twice before picking Gwen in a Wild Rift game as these are the champions that can heavily counter her.

Kennen’s abilities are comprised of ranged attacks. While Gwen has Hallowed Mist, it has a long cooldown. This implies that she cannot always block his attacks. As said, Gwen is mostly at a disadvantage when laning against ranged champions like him. Similarly, Kennen can engage and disengage immediately with Lightning Rush (E).

Tryndamere is one of Gwen’s hardest counter. Post-level 5, she is useless against a good Tryndamere as he is stronger in the early game compared to Gwen.

Here are some pros and cons if you are playing with Gwen in Wild Rift.

FAQ's About Gwen in Wild Rift

How good is Gwen in Wild Rift?

Gwen is currently at S+ tier. She may be weak in the early game but she can easily scale into mid and late game due to her being a strong duelist. This also allows her to become a good splitpusher for her team. She may not be as tanky as the rest of the bruisers, but she receives additional resistance from Hallowed Mist. Furthermore, she’s a good candidate against tanky champions, thanks to Thousand Cuts and Snip Snip.

What role / lane should I play with Gwen in Wild Rift?

Gwen shines best in the Baron Lane, as this lane is mostly comprised of tank and melee champions which favors her kit. She’s a good splitpusher and an AP scaling anti-tank champion.

What is the best runes and build for Gwen in Wild Rift?

Equip Conqueror on Gwen as she can easily gain stacks from quick and consecutive attacks she can land in a short duration, especially at high attack speed. Her strength on the other hand is fueled by ability power, hence it is crucial to build AP items on her like Riftwalker, Nashor’s Tooth, Void Staff, Rabaddon’s Deathcap and Banshee’s Veil.

Take your calendar and make sure to take note of her release date. Gwen is expected to arrive during the release of the Patch 3.4 on September 15, 2022. She will then be followed by Yone, Vex and Warwick.