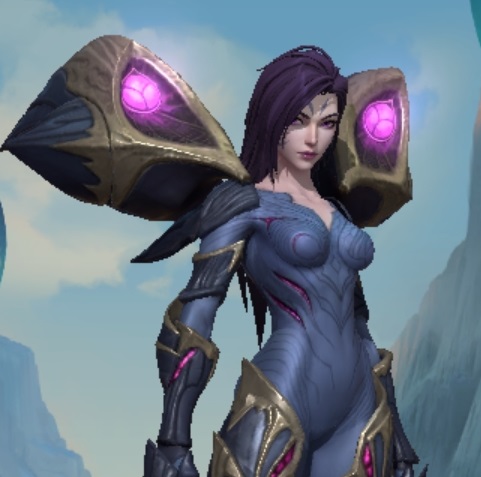 Best Kai'sa Wild Rift build guide for Season 7 Patch 3.5 of WR. With our Kai'sa guide you will learn which items to build, runes to select, skill order, who counters Kai'sa, and how to use abilities properly.

Claimed by the Void when she was only a child, her experiences have made her a deadly hunter and, to some, the harbinger of a future they would rather not live to see. Kai’Sa is an unconventional Marksman who evolves depending on the items she buys. She is a backline champion who can suddenly appear behind enemies who are left alone and suddenly be devoured by the Void who is Kai’Sa.

Here are Item Build Recommendations that works on this champion and which are the best build for Kai'sa Wild Rift in this patch.

This is the standard build for Kai’Sa which focuses on AD type items. There is a definite pattern to efficiently upgrade Kai’Sa’s Q, Icathian Rain and E, Supercharge as fast as possible. It goes like this.

This item build is the AP type Kai’Sa. This is as viable as the AD type Kai’Sa but it shines when you are the only champion in your team which is capable of dealing AP type damage.

Runes for Kai'sa in Wild Rift

Heal is the perfect summoner spell for Marksmen because it heals not only you but your support as well. Plus, it has a movement speed bonus which could possibly mean the life or death of you.

Flash is necessary for Kai’Sa since she is relatively immobile, considering that her only blink/dash type spell can only be used offensively and the ability which increases her movement speed only last for a very short while.

Kai’Sa prioritizes her 1st, Icathian Rain because it is her main source of damage. The next ability to be maxed is 3rd, Supercharged as fights and objectives start to happen in the mid game and 2nd, Void Seeker is maxed last as it serves its utility well enough with just one point in it. Put a point in Killer Instinct whenever possible.

Living Weapon: Kai’sa’s abilities evolved based upon the permanent stats she gains from Items and Levels.

Plasma detonations deal a max of 400 damage to monsters. 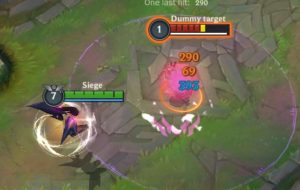 Kai’Sa has two passive components to Second Skin. The first one is Living Skin which allows her to upgrade her passive depending on the items she builds. This allows her to play both an AD or AP style reliably. Both build paths are viable and what’s more effective will depend on the matchup, your own draft, and the items that your opponents buy.

The second passive component is Caustic Wounds which marks enemies and deals execution damage on the 5th mark. Execution damage means that the damage an enemy receives becomes stronger the lower an enemy’s HP becomes. This effect transfers to all Runaan’s Hurricane attacks, making it an excellent item on her. 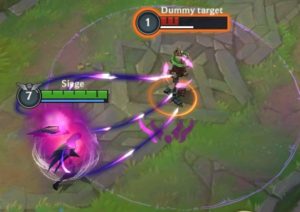 Icathian Rain launches missiles that spread evenly around its AoE. This skill is what makes Kai’Sa deadly against isolated opponents.

Icathian Rain is great for wave clear but reduce the HP of minions first so you can be sure that you will be the one to get the last hits.

Icathian Rain upgrades upon stacking 70 bonus AD. The most efficient way to stack AD on Kai’Sa is discussed in the item build section.

Once upgraded, Icathian Rain double the number of missiles unleashed. 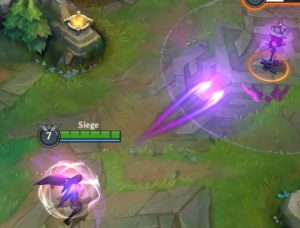 Void Seeker is a long range skill that you will use in two ways. And no, it is not useful for poking enemies.

The first use is to increase the pace at which you stack your marks. Hitting enemies with Void Seeker adds 2 stacks, 3 if upgraded. Using this ability in between your attacks will surprise your opponents with the increased DPS. Mastering this is especially important if you are inclined to playing AP type Kai’Sa because her stacks scale with her AP.

The second use is to mark enemies from far away so you can use your ultimate on them. This is useful on mid to late game clashes because the moment you hit them with Void Seeker, the backline opens up for you. When the enemy team committed their abilities already or are in the middle of all-ins, it will be the perfect time to use Killer Instinct and kill them one by one from behind.

Void Seeker is upgraded once Kai’Sa stacks 80 AP. The current meta build does not upgrade Void Seeker but you can upgrade it by using the hybrid mage build. 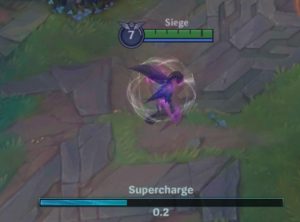 Supercharge is a form of steroid skill that increases Kai’Sa’s attack speed and adds some mobility as well. The catch here is that you cannot attack while casting the skill.

Use it when you are sure that you are going for an all in and when upgraded, it turns Kai’Sa invisible and you can now use it to throw off your opponents. Move in one direction then change your path while invisible to confuse your enemies.

You can cast 1st, Icathian Rain while charging. 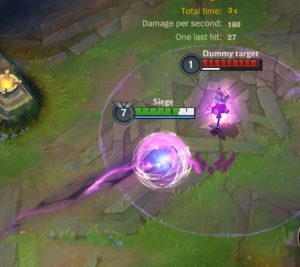 Killer Instinct is your main outplay tool. It allows you to jump over long distances and gain a shield while at it.

The main use of Killer Instinct is to jump backliners after marking them with Void Seeker to assassinate them. Do not do this early in the clash because that will result in your death nine times out of ten. Use if after the enemy team burns out their abilities. In the meantime, free hit their front liners who are trying to breakthrough.

You can also use Killer Instinct to avoid enemy skill shots, especially strong crowd controls. Or you can use it simply to gain a shield while dueling with an enemy.

Do not blindly click Killer Instinct. If a bush is near an enemy, cast this ability there so you’ll have an additional moment to surprise and outplay your enemy. Follow up with 3rd, Supercharge after a few hits to further frustrate the enemy team.

In the early game, play it safe and only last hit whenever you are safe from being poked and all-in’d. You can use 1st, Icathian Rain and 2nd, Void Seeker to secure last hits.

If your enemy has strong poke abilities, save your 3rd, Supercharged for the bonus movement speed when activated to aid you in avoiding those skill shots.

It is crucial to secure as many last hits as possible because it is possible to upgrade your 1st, Icathian Rain by buying

Long Sword at exactly the first drake spawn at 4 minutes.

In the whole early game, you can take an aggressive stance if there is an opportunity to stack up your passive, Caustic Wounds on your enemies.

Kai’Sa has great dueling potential thanks to her strong isolated damage from her upgraded 1st, Icathian Rain, invisibility from 3rd, Supercharge, and from the targeted blink from your ultimate, Killer Instinct.

Even so, it is best to use her outplay tools defensively so she can destroy her enemies one by one.

Sona is a great babysitter champion in the lane which augments Kai’Sa’s subpar early game and she has strong team fight presence which Kai’Sa needs in order to sneak in the backline to finish off the opposing team.

Leona’s aggressive playstyle can turn Kai’Sa’s subpar early game into an oppressive one thanks to her engage capability and her ability to extend fights so Kai’Sa can stack up her passive, Caustic Wounds.

Jinx has a longer range than Kai’Sa which allows her to control her lane better. In the late game, when she has her Get Excited! activated, Kai’Sa is outmatched in terms of DPS.

Ezreal is a safe pick against Kai’Sa since he outranges her through his pokes and mobility. If he can land all his abilities in quick succession, he will be able to burst Kai’Sa down before she can even start to stack up her passive on him.

Here are some pros and cons if you are playing with Kai'sa in Wild Rift.

FAQ's About Kai'sa in Wild Rift

How good is Kai'Sa in Wild Rift?

Kai’Sa is a (Tier S+). She is an independent ADC who can tear down tanks thanks to her passive and she has a lot of defensive outplay tools that can help her fight against assassins.

What role / lane should I play with Kai'Sa in Wild Rift?

Kai’Sa is a marksman played in the Dragon lane. She is an ADC whose strength lies in her upgrades and her ability to position herself against isolated and low HP targets.

What abilities do I level up with Kai'Sa?

Kai’Sa prioritizes her 1st, Icathian Rain because it is her main source of damage. The next ability to be maxed is 3rd, Supercharged as fights and objectives start to happen in the mid game, and 2nd, Void Seeker is maxed last as it serves its utility well enough with just one point in it.

What items should I build with Kai'Sa?

Here is the definite pattern to efficiently upgrade Kai’Sa’s 1st, Icathian Rain and 3rd, Supercharge as fast as possible. It goes like this.

Second upgrade – 3rd, Supercharge (you should buy boots in between if you don’t have enough gold to push through with the upgrade.)

Afterward, you can choose to complete either Infinity Edge or Runaan’s Hurricane.

What Runes should I use when playing as Kai'Sa?

Conqueror increases your damage as the fight goes on with this rune. Kai’Sa stacks up this rune fast because of her attack speed and area affecting attacks. Her other runes are Gathering Storm, Adaptive Carapace, and Sweet Tooth.