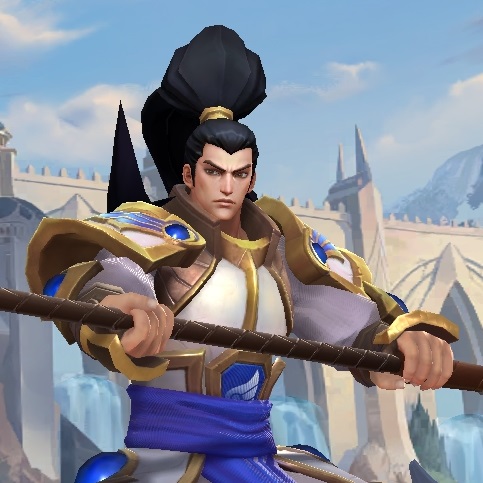 Best Xin Zhao Wild Rift build guide for Season 7 Patch 3.5 of WR. With our Xin Zhao guide you will learn which items to build, runes to select, skill order, who counters Xin Zhao, and how to use abilities properly.

Armed with his favored three-talon spear, Xin Zhao fights for his liberators, audaciously challenging any foe, no matter the odds. Xin Zhao is an early game jungler who takes advantage of his strong early game to bully the enemy team into snowballing the game to win it fast and early.

Here are Item Build Recommendations that works on this champion and which are the best build for Xin Zhao Wild Rift in this patch.

This is going to be our standard build on Xin Zhao which makes him a strong early game ganker and a potent assassin throughout the game.

If you ever decide to play Xin Zhao in the top lane, a bruiser build that balances offense and defense is recommended.

Smite is a must for junglers as it is impossible to clear jungle camps without it. Upgrade into the Blue Smite because you are already strong in the early game and the slow effect from it will help secure ganks.

Flash is a versatile summoner spell that you can use for all kinds of offensive and defensive situations.

Ignite is a useful spell when playing as a top laner because you are a dueling champion who always wants to be in fights.

The first point will go to E, Audacious Charge because of the increased attack speed to help you clear your jungle. After getting all abilities. We are going to max W, Wind becomes Lightning because it has the best base damage scaling then E, Audacious Charge next for the increased attack speed. We are going to max Q, Three Talon Strike because it scales better with your damage than its ability level. Get a point of Crescent Guard whenever possible.

Empowers the next three attacks to deal an additional 20 physical damage (20 + 40% AD) and reduce the cooldown of other abilities by 1 second.

The third attack knocks the target up for 0.75 seconds.

The Farthest enemy champion or large monster hit is challenged for 3 seconds, increasing audacious charge’s cast range at them.

this ability’s cast range is increased against a challenged target.

Sweeps his spear, dealing physical damage equal to 75 (75 + 100% bonus AD + 80% AP) plus 15% of enemies’ maximum Health and knocking them back except for challenged enemy, Xin Zhao blocks damage from enemies far away for 5 seconds, extended by 0.3 second for every attack and ability.

The enemy most recently hit by Xin Zhao’s attacks or Audacious Charge is not knocked back.

Determination makes your jungle clear extremely fast and it makes you deal so much damage. Plus, it heals you every time it procs. It also works on towers and even on wards. 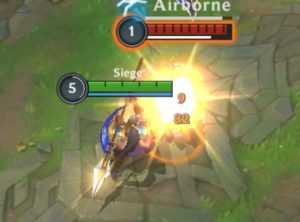 Three Talon Strike empowers Xin Zhao’s next 3 auto attacks to deal bonus physical damage. The third auto attack knocks up the target. The three attacks also reduce all his other ability’s cooldown by 1 second each.

A trick using this ability is to use the first two attacks on jungle monsters or minions before engaging on the enemy to surprise them with the instant knock-up. 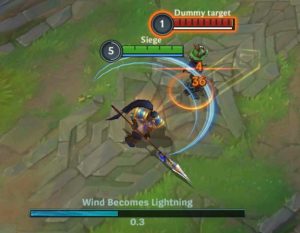 Wind Becomes Lighting is great when paired with the knock-up from Three Talon Strike because it ensures that both attacks will hit the enemy. 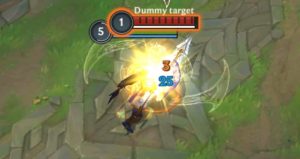 Audacious Charge is a targeted dash that deals magic damage to the target and nearby enemies. It also slows the target for a short duration and grants Xin Zhao bonus attack speed.

Audacious Charge can only be used on opponents but it can still be used for escaping by targeting minions or jungle monsters. Xin Zhao can cross walls using this ability. 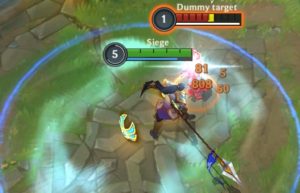 Crescent Guard deals burst physical damage based on their maximum HP to everyone around him and knocks them back except for the enemy most recently attacked by Xin Zhao or hit by his 3rd, Audacious Charge.

After the knockback, a ring appears around Xin Zhao. Those outside the ring won’t be able to damage Xin Zhao. The ring moves together with Xin Zhao.

You can do an insec style play (knocking back an enemy to your team) by casting Crescent Guard behind the enemy. You can pull this off using your 3rd, Audacious Charge, and Flash. Of course, a little practice is a must. And do not forget, do not push enemy tanks into your team.

Xin Zhao is an early game ganker. Abuse his strong early game as much as possible.

Before leaving the base, get your Oracle Lense first to disable wards as you attempt a gank.

In the early game, get your red buff and raptors then head straight to your mid lane and attempt a gank.

You don’t have to get a kill. It’s great if you killed the enemy but burning their flash or forcing a recall is enough to start snowballing a lead.

Do not stay on a bush or lane for more than 10 seconds when attempting a gank. If the lane looks ungankable, do not force it. Move on, farm a little then look for a lane to gank again.

Get your blue buff then attempt to gank the blue side. After your gank attempt, get the river scuttler then Gromps. After that, recall and get a Serrated Dirk and boots.

Kill the Raptor camp again or the Scuttlers on the other side if it is still alive then try to gank the mid once again.

Get Red buff once again then try to gank the red buff side lane. If the red buff is not yet available, gank the side lane first before getting your buff.

In summary, just try to gank and farm in between. Do not get too caught up in ganking as too many failed attempts will put you behind in levels and gold but too much farming and you will lose out in Xin Zhao’s strong early game.

Xin Zhao falls hard in the late game so do not overextend yourself as much once the enemies begin to have three complete items or more.

Transition your game from an assassin who kills enemies to being a bruiser who protects your team and initiates fights.

You are still strong enough to burst down enemies but only if they are isolated and it is much better if they have already expended their abilities so play it safe at the start of the fights because Xin Zhao is great at cleaning up fights in the late game.

Ashe needs a lot of protection and babysitting in the early game. But when she gets her items, she becomes a force to reckoned with. With Xin Zhao’s early game presence, Ashe can farm with peace of mind and carry the game later with Xin Zhao at the front while Ashe hits freely behind him.

Lulu makes you unkillable even if you build full damage thanks to the bonus HP from her ultimate, Wild Growth, and shield from her E, Help Pix!

Olaf can snowball just as fast if not as hard as Xin Zhao. Xin Zhao might have a little more burst damage but Olaf can last longer and has better sustain than him. If Xin Zhao loses even just one early game jungle contest against Olaf, it’s game over for him. The only thing that Xin Zhao has over Olaf is that his ultimate grants him a stronger team fight presence. Avoid 1v1s against Olaf as much as possible.

Wukong is a jungler who can clear just as fast as you and deal as much damage as you in the early game. He has an advantage over you in terms of mobility and team fights but you can win early game duels against him. Try to snowball on him by counter ganking and invading his jungle because if you don’t win the early game, he’ll most likely come out on top.

Despite his multiple nerfs, Lee Sin is still one of the strongest early game junglers. He has unparalleled mobility and his burst damage is nothing to scoff at. Pray that your teammates play it safe in the early game or else a good Lee Sin will just stomp over them. Try to countergank as much as possible.

Here are some pros and cons if you are playing with Xin Zhao in Wild Rift.

How good is Xin Zhao in Wild Rift?

Xin Zhao is an (Tier S) champion. He is a great jungler because of his fast clear and he gets strong fast even with minimal items.

What role / lane should I play with Xin Zhao in Wild Rift?

Xin Zhao is usually played in the jungle as an aggressive ganker but he is also a viable top laner where you can build him tanky as a bruiser for your team.

What abilities do I level up with Xin Zhao?

What items should I build with Xin Zhao?

You can buy a Duskblade of Draktharr as a first item which is great for snowballing a lead but Xin Zhao’s core item is Trinity Force as the bonus damage, attack speed, and Spellblade passive works really well for him. All his other items are situational.

What Runes should I use when playing as Xin Zhao?

Xin Zhao usually uses Conqueror for the bonus damage in extended fights but he can also use Electrocute if he is facing a team composition with lots of squishy low HP champions. For his other runes, get Brutal, Hunter – Titan, and Pathfinder.

How do I snowball as a Xin Zhao Jungler?

Xin Zhao’s full combo is sweeping foes off the map, and teammates can’t even touch him if he has his ultimate on. We’re nerfing his most important stat, Attack Damage, while also making him much squishier.