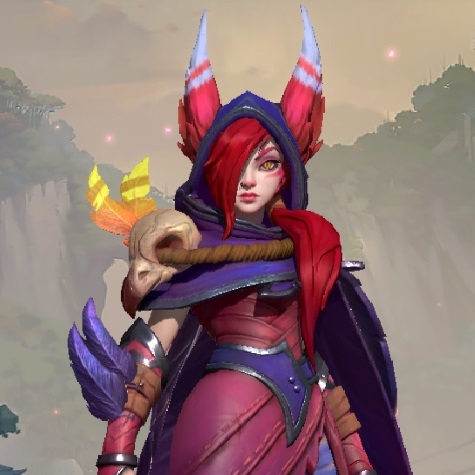 Best Xayah Wild Rift build guide for Season 7 Patch 4.0 of WR. With our Xayah guide you will learn which items to build, runes to select, skill order, who counters Xayah, and how to use abilities properly.

Xayah is a Vastayan revolutionary of deadly precision. She uses her speed, guile, and razor-sharp feather blades to cut down anyone in her way. Xayah fights alongside her lover, Rakan, to restore their race to its former glory. Xayah is a highly mechanical ADC that has great potential in both 1v1 and team fights.

Here are Item Build Recommendations that works on this champion and which are the best build for Xayah Wild Rift in this patch.

The Rebel of Haste

This high ability haste item build will allow you to spam your abilities more than any other build. Thanks to the low cooldowns when using this build, you will be able to enjoy unlimited Clean Cuts, more DPS bonuses from Deadly Plumage, and root after roots from Bladecaller.

Runes for Xayah in Wild Rift

The Heal summoner spell heals both her and a nearby allied champion and increases their movement speed as well. The increased movement speed can be used both in offensive and defensive situations which makes it the better choice compared to Barrier.

Flash enables Xayah in a lot of offensive and defensive situations. It can also be used during her ultimate, Featherstorm or to cover more ground and hit more targets with the feathers during 3rd, Bladecaller.

Get a point in your 1st, Double Daggers in level 1 for the poke and so that you’ll be able to generate Feathers in demand but we’ll max it last as it does not scale well. Max 3rd, Bladecaller first as it is your main source of damage then max 2nd, Deadly Plumage next to scale your DPS steroid for the mid and late game. Get a point in your ultimate whenever possible.

After using an ability, Xayah’s next 3 attacks will hit all enemies along their path and drop Feathers she can recall, Xayah can store up to 5 Feathers at a time.

Lover’s Leap – Xayah and Rakan can join each other’s recall. Both will reach the Summonjing Platform when the initiator’s recall ends.

Creates a storm of blades for 4s that grants 25% Attack Speed and causes attacks to deal 20% more damage.

If Rakan is nearby, he will also gain the effects of this skill.

Calls back all Feathers, dealing 55 physical damage (55 + 60% bonus AD) to enemies they pass through. Hitting an enemy with 3 Feathers roots them for 1s.

Leaps into the air, becoming untargetable and throwing out a fan of daggers which deal 100 physical damage (100 + 100% bonus AD) and leave behind a line of Feathers. Can move while in the air. 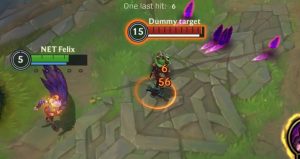 When Xayah casts an ability, she stores feathers which makes her next auto attacks pass through enemies.

The main target receives 100% damage while all secondary targets are dealt reduced damage.

You can try to angle your attacks to hit the enemy while you last hit minions but the secondary damage is minimal in the early game. In the late game, though, this passive will allow you to deal massive AoE DPS against the enemy team.

Keep in mind the positions of your Feathers so you will know how to position yourself best before activating your E, Bladecaller.

There is technically no limit to how many Feathers she can place, The maximum number I reached on zero CD is 35 but on a real game, you’ll be able to lay down a maximum of about 15 Feathers.

Additionally, Xayah has a secondary passive, Lover’s Leap which allows her to recall together with Rakan. You can wait until the very last second to hitch on Rakan’s recall. 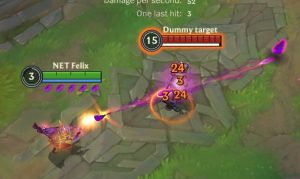 Double Daggers is your poke and initial setup for your Feathers. This is the most reliable way to drop Feathers and get charges for your passive.

Double Daggers deals less damage after the first enemy it hits so make sure to hit the enemy champion you are trying to burst down. 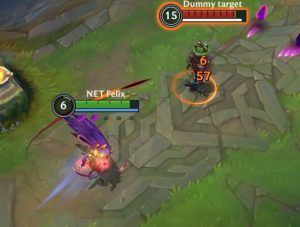 The only problem with this ability is that is it limited by a long cooldown. It’s justifiable given how strong it is.

The movement speed bonus only activates after hitting an enemy champion. If you activate it at the wrong time, the enemy can simply kite you out until Deadly Plumage’s duration ends. To prevent this from happening, activate Deadly Plumage while an auto-attack is mid-air so that once the auto-attack hits the enemy, the movement speed bonus will activate.

Deadly Plumage has a special interaction with Rakan. If used while near him, Rakan will also gain the bonuses of Deadly Plumage. This interaction is great for bursting down enemies and turrets. 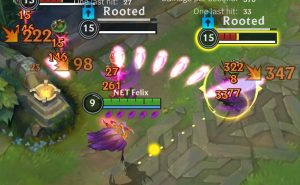 She can either use it to quickly root an enemy with the help of her 1st, Double Daggers, or ultimate, Featherstorm.

Or she can set up massive AoE burst damage and root by scattering her Feathers through her auto attacks and abilities and waiting for the right moment to activate it.

If you use your ultimate, Featherstorm for the root, make sure that the distance between you and the enemy is less than the maximum range of Featherstorm so that the root will take place.

The closer you are to an enemy, the easier it is to land more feathers, and therefore, more damage.

It is possible to redirect the Feathers while it is returning to you by using Flash. You can do this to cover more ground to damage and root enemies that won’t be hit otherwise. 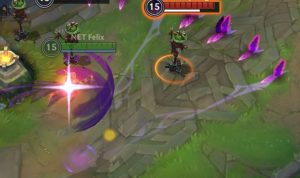 Featherstorm makes Xayah an extremely effective counter to assassins and divers because it turns her untargetable for a short duration then lays down five Feathers that are immediately usable for her 3rd, Bladecaller for the additional damage and root.

Keep in mind that the untargetable status does not make her invulnerable, she can still die through an Ignite already cast on her or through Zed’s Death Mark if he has already dealt enough damage.

Xayah is a relatively weak early game ADC as she has her auto-attack is on the shorter side and her poke is not reliable as a source of damage.

Although she’s not the best at poking and trading, she can push decently with her 1st, Double Daggers and passive so instead of seeking out the enemy, look to push and clear the wave faster than the enemy so you’ll be able to have a level advantage against the enemy.

If the enemy tries to freeze the lane near their tower, use a 1st, Double Daggers + 3rd, Bladecaller combo on the minions to quickly clear it and reset the lane. Don’t forget to track the enemy jungler or at least ward the river and tri-bush before doing so.

It is best to pair her with a champion with crowd control, including Rakan, of course so she’ll be able to put down more Feathers to maximize the damage from her 3rd, Bladecaller.

Try to play it safe and lower the enemy’s HP through quick 1st, Double Daggers + 3rd, Bladecaller combos, and keep your HP at a safe level so you’ll be able to engage in an all-in together with your support once the enemy has about 60% HP or lower.

Xayah plays better if she is snowballing or at least in an even matchup so play it safe and do not overextend or overcommit to avoid unnecessary deaths.

Xayah shines in the mid-game and late game.

Hit whoever is in front of you and activate your 2nd, Deadly Plumage once you know you are going to do a series of auto-attacks. Do not hesitate to do so even if the enemy in front of you is a tank.

Do not overextend and play close to your team as you are an immobile champion with just one lifeline ability which is your ultimate. Play it safer if your 2nd, Deadly Plumage, and/or ultimate is on cooldown.

Try to lay down as many feathers as possible if a long, messy fight is happening then cast your 3rd, Bladecaller to finish off enemies or root them if they try to leave the area where you set up your feathers.

Do not wait too long to activate your 3rd, Bladecaller as they might be able to escape and make your setup useless.

Of course, Xayah’s top synergy is Rakan. Their abilities are stronger if they are used near each other and they even have an innate passive, Lover’s Leap, which can only be used when they are together. Rakan provides a lot of utility and can control the enemy for quite some time so it will enable Xayah to set up a lot of Feathers to burst them down with her 3rd, Bladecaller.

Lulu is an amazing support that can enable Xayah to be an unstoppable hyper carry. Her 2nd, Whimsy will amplify Xayah even further and make her DPS skyrocket if her 2nd, Deadly Plumage is active at the same time.

Once Xayah roots an enemy, Nami can use her 1st, Aqua Prison on the enemy and the chain combo will usually result in an easy kill. Her movement speed boost and other abilities also augment Xayah’s playstyle.

Kai’Sa can disengage on you when you use your 2nd, Deadly Plumage using her 3rd, Supercharge. Try to save your 2nd, Deadly Plumage until you are sure that her 3rd, Supercharge is on cooldown. But even if you do that, if she’s skilled enough, she can dodge your 3rd, Bladecaller using her ultimate, Killer Instinct. She has a lot of outplay tools for you and that will make her extremely tough to beat on duels.

Vayne is another ADC with a lot of self-peeling and that makes duels impossible against her. Once you use your 2nd, Deadly Plumage, she will simply 3rd, Condemn you and 1st, Tumble away. She’s not as hard to beat as Kai’Sa but she can still be a pain for you and your team especially if she manages to farm well.

Miss Fortune will make your laning phase hell. Her 1st, Double Up hits like a truck all game long. But if you manage to survive the laning phase against her, it will get better quickly.

Here are some pros and cons if you are playing with Xayah in Wild Rift.

FAQ's About Xayah in Wild Rift

How good is Xayah in Wild Rift?

Xayah is an (Tier S) champion. She is one of the few ADCs who can stand toe to toe against assassins. She has amazing burst damage and DPS which rivals the strongest ADCs as well.

What role / lane should I play with Xayah in Wild Rift?

Xayah is played in the Dragon lane as an ADC. She is relatively weak in the early game so she needs a support to help her secure her farm.

What abilities do I level up with Xayah?

1st, Double Daggers are acquired in level 1 to help with the wave clear but her 3rd, Bladecaller is maxed first as it is her primary source of burst damage then her 2nd, Deadly Plumage is maxed next to increase her DPS through the mid and late game. Of course you should get a point in her ultimate whenever possible.

What items should I build with Xayah?

Her core items are Infinity Edge for the bonus AD and crit and Rapidfire Cannon to increase her attack range. She can also build Blade of the Ruined King early if she is facing against a lot of tanks.

What Runes should I use when playing as Xayah?

She benefits a lot from the bonus damage from Conqueror but she can also use Fleet Footwork when against a poke heavy lane. Her other runes are Gathering Storm, Renegeration, and Sweet Tooth.

How do I root enemies with my E, Bladecaller?