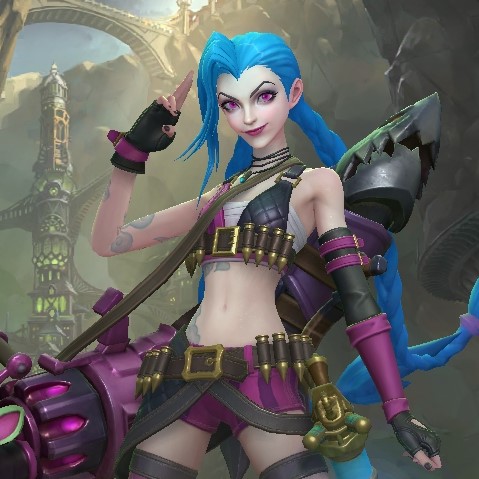 Best Jinx Wild Rift build guide for Season 7 Patch 4.0 of WR. With our Jinx guide you will learn which items to build, runes to select, skill order, who counters Jinx, and how to use abilities properly.

Jinx lives to wreak havoc without care for the consequences. With an arsenal of deadly weapons, she unleashes the loudest blasts and brightest explosions to leave a trail of mayhem and panic in her wake. Jinx is a hyper carry who has one of the highest possible late game DPS thanks to her passive, Get Excited! and first ability Switcheroo! which grants a massive attack speed boost. She is also a marksman which has is capable of doing massive AoE DPS thanks to her Fishbones, The Rocket Launcher form.

Here are Item Build Recommendations that works on this champion and which are the best build for Jinx Wild Rift in this patch.

This is the standard build for Jinx which centers on increasing both her single target and AoE DPS.

This build is for extra hard games which prioritzes

Bloodthirster as the first item to have the lifesteal effect early on to increase your chances of surviving.

Phantom Dancer is chosen over Rapid Firecannon for the lifeline passive as another defensive measure.

Runes for Jinx in Wild Rift

Heal is one of the best summoner spell in the dragon lane right now for marksmen because it heals both you and your support and gives you a short burst of movement speed bonus.

Flash is a spell that Jinx can’t go without because she is an immobile champion and without Flash, she’s just simple food for assassins.

Max 1st, Switcheroo! first to maximize the range for Fishbones, the Rocket Launcher, and the bonus attack speed for Pow-Pow, the Minigun. We’re going to max 2nd, Zap! second because all of its stats scale with level while we will max 3rd, Flame Chompers! last because its root duration does not scale and there is not much benefit to decreasing its cooldown early on. Get a point in her ultimate whenever possible.

Scoring a takedown on a champion or structure that Jinx has damaged within the last 3 seconds grants her 150% decaying Movement Speed and 15% Total Attack Speed for 6 seconds.

While Excited, Jinx can exceed the Attack Speed cap.

Fishbones, the Rocket Launcher: Attacks cost Mana but gain 75 range and explode to deal 110% damage to the target and enemies around it.

Pow-Pow, the Minigun: Attacks grant bonus Attack Speed for 3 seconds. This effect stacks up to 3 times for a total of 30%.

Pow-Pow’s stacks fall off one at a time and will only benefit the first attack fired from Fishbones.

Tosses out three chompers that arm after a bit delay. Chompers explode on contact with enemy champions, interrupting their dashes and rooting them for 1.3 seconds. Enemies hit by the explosion take 70 mage damage (70 + 100% AP).

Chompers last for 5 seconds and will explode automatically if no champion triggers them.

Fires a mega-rocket that gains damage and speed over the first second it travels. The rocket explodes on the first enemy champion hit, dealing 25 to 250 physical damage (25 + 15% bonus AD to 150% bonus AD) plus 25% of their missing health. Nearby enemies take 80% damage.

Jinx’s passive makes her quite OP in the late game. Get Excited! increases Jinx’s attack and movement speed by a great deal for a short while when she scores a takedown on an enemy champion or enemy turret. Once her passive activates, she becomes an unstoppable monster that is near impossible to deal with. 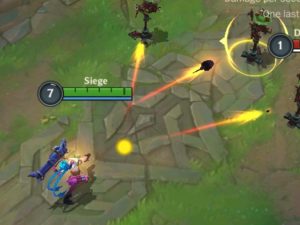 Switcheroo! allows her to switch between two forms, Fishbones, the Rocket Launcher and Pow-Pow, The Minigun.

Fishbones, the Rocket Launcher deals long-range enhanced AoE damage which works well with Runaan’s Hurricane as shown in the picture above. The AoE damage also works with the additional projectile which makes it exceptionally strong against clumped-up targets.

The catch with Fishbones is that it expends mana with each attack. Jinx mana depletes extremely fast while using Fishbones, especially in the early game. Furthermore, it is not good at 1v1 situations, which is where Pow-Pow comes in.

Pow-Pow, the Minigun has a shorter range, even compared to most marksmen, but with each attack using Pow-Pow will increase Jinx’s attack speed by a given amount which stacks up to 3 times. This makes Jinx superior in terms of single target DPS and when combined with Get Excited!, makes Jinx’s DPS shoot through the roof.

As a rule of thumb, use Fishbones to harass and damage from afar and use Pow-Pow for all-in engages and 1v1s. 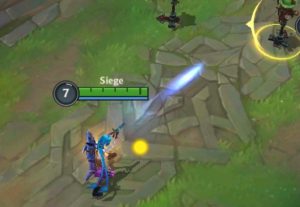 Zap is a long range poke that deals physical damage and slows the first enemy it hits. It is a great poking tool in the early game and a gap closer or finisher in the middle to late game. 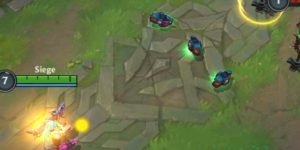 Flame Chompers is Jinx’s only crowd control and form of self-peel (way of protecting one’s self).

Flame Chompers always drop in a line and will activate only after a bit of delay. Placing them directly below a moving champion will give them time to avoid it. It is better used in one of three methods (non-exhaustive list): 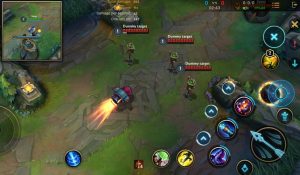 Super Mega Death Rocket! is a global range ult which is an execution skill as well. The damage the rocket deals scales with the range it traveled and from the missing HP of the affected enemy. It can potentially execute an enemy below 30% HP from any range. It travels fairly fast.

Aside from using Jinx’s ultimate as a global range execution tool and for stealing Baron or Dragon, that’s all that there is to it.

Jinx has an average early game strength. She can poke enemies a little using her Fishbones, the Rocket Launcher mode because of its long range but her Launcher mode is heavily limited by its mana cost in the early game so try to use it sparingly.

But Jinx has no mobility tool and her 3rd, Flame Chompers! are unreliable as a peeling tool so never overextend on Jinx because she’s vulnerable if enemies get near her.

Use your 1st, Switcheroo! to switch between modes. If you are having a hard time against enemies, last hit using Fishbones, the Rocket Launcher but reserve your attacks only for last hitting to conserve your mana pool.

If minions are close to your turret, you will be able to use Pow-pow, the Minigun to shove the waves so that it will not crash into your turret.

If you are paired with a support with crowd control, follow up their crowd control with your 3rd, Flame Chompers!

But if you are paired with a poke-type enchanter, poke enemies with your Fishbones, the Rocket Launcher and W, Zap! until their HP is low enough for an all-in but do not overextend as losing farm is detrimental for Jinx.

Jinx is a force to be reckoned with in the mid and late game. She is a hypercarry who is capable of carrying games with minimal help from her team as long as she has superior positioning.

Once Jinx Gets Excited! She becomes probably the strongest ADC in the game. Play it safely behind your teammates before you Get Excited! And once you get a takedown or destroyed a turret, go crazy on the enemy team!

If you don’t have the passive activated, you can play it safe by using your Fishbones, the Rocket Launcher for the extra range and AoE damage. Once you are sure of the enemy’s position and you are near allies, switch to Pow-pow, the Minigun to increase your DPS.

Blitzcrank has pretty good synergy with Jinx with the Rocket Grab + Flame Chompers! combo that when executed successfully, is an almost guaranteed kill. Jinx is weak in the early game but it changes into the opposite when she is paired with Blitzcrank.

Jinx becomes an unstoppable force when enabled by Lulu. Because of this, they have become a quite popular pair in high elo because of their OP synergy. Lulu increases Jinx’s DPS and makes sure that she survives any attempts to kill her.

Jhin has extreme kill pressure in the laning stage, the stage that Jinx is the weakest. Jhin’s abilities also has the range, damage, and pressure which will make Jinx’s early game a hard one. However, Jinx will generally win the game if she survives the early game healthily by not giving too much of a lead to Jhin.

Miss Fortune has a strong poke ability which makes it impossible for her enemy to farm especially if she is paired with another poke-type enchanter. Denying farm is crucial to beating Jinx.

Here are some pros and cons if you are playing with Jinx in Wild Rift.

FAQ's About Jinx in Wild Rift

How good is Jinx in Wild Rift?

Jinx is a (Tier S) champion. She is currently one of the most popular ADC because of unstoppable hypercarry snowballing.

What role / lane should I play with Jinx in Wild Rift?

Jinx is played in the Dragon lane as an ADC. She requires farm but she comes online fast in the mid game and even in the early game once she bags some champion takedowns.

What abilities do I level up with Jinx?

Max 1st, Switcheroo! first to maximize the range for Fishbones, the Rocket Launcher, and the bonus attack speed for Pow-Pow, the Minigun. We’re going to max 2nd, Zap! second because all of its stats scale with level while we will max 3rd, Flame Chompers! last because its root duration does not scale and there is not much benefit to decreasing its cooldown early on.

What items should I build with Jinx?

Jinx should be built with Blade of the Ruined King first for the on-hit %HP damage effect which synergizes with Jinx’s attack speed. Afterwards, she should get Infinity Edge and Runaan’s Hurricane to increase her hyper carrying capability.

What Runes should I use when playing as Jinx?

Conqueror  increases Jinx’s damage with each attack. Perfect combination with the stacking nature of her kit. Her other runes are Gathering Storm, Loyalty, and Sweet Tooth.

Any tips so I can aim my Jinx's ultimate better

Wait for a few moments before activating your ultimate so you’ll have a better idea of where the enemy is. The longer you wait, the better the chance that the enemy has stopped to recall.