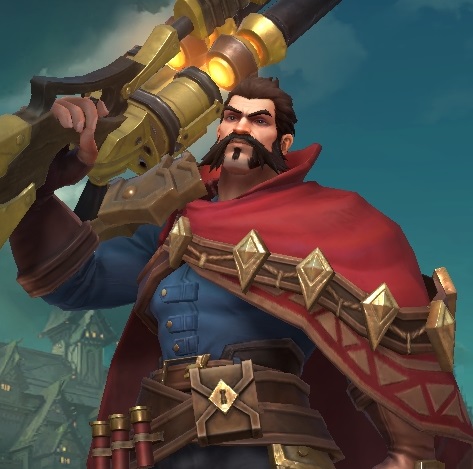 Best Graves Wild Rift build guide for Season 7 Patch 4.0 of WR. With our Graves guide you will learn which items to build, runes to select, skill order, who counters Graves, and how to use abilities properly.

Malcolm Graves is a renowned mercenary, gambler, and thief. He has an explosive temper but he possesses a strict sense of criminal honor. Graves is a Marksman/Fighter mix who is played mostly in the Jungle and he has a unique auto-attack mechanic which makes him a very fresh take on the game.

Here are Item Build Recommendations that works on this champion and which are the best build for Graves Wild Rift in this patch.

This is the standard build with Graves in the jungle which makes him a strong early game to mid game carry. This build increases the burst damage of Graves by a lot, turning him into a potent assassin capable of deleting enemy carries fast. The downside to this build is it makes Graves squishy and vulnerable against enemy tanks and bruisers.

This is a bruiser build that makes him effective at longer fights. This build is effective against tanks and carries alike.

Runes for Graves in Wild Rift

Smite is required for a jungler to play its role effectively. It is almost impossible to jungle without the Smite spell. Upgrade into the Blue Smite when in a favorable matchup against non-duelist champions like Amumu and Upgrade into the Red Smite when against strong duelist junglers like Olaf or Master Yi.

Flash is a good spell for Graves even if he is fairly mobile because it allows him to escape when in a dangerous situation when collapsed in by the enemy team.

The first point goes to 3rd, Quickdraw, for the Grit armor bonus so Graves will be able to maintain a healthy amount of HP throughout his early game clear. The first ability to be maxed is 1st, End of the Line, to increase our burst damage output. Then 3rd, Quickdraw, to increase the bonus armor. The last ability to be maxed is 2nd, Smoke Screen, because it provides enough utility even on its first level only. Get a point in Collateral Damage whenever possible.

Graves’ shotgun has some unique properties:

Double Barrel: Graves must reload when he runes out of ammo. Attack speed reduces reload time slighty, but reduces time between attacks dramatically.

End of the Line

Detonates in 0.25s if the round hits terrain.

Throws a canister that creates a cloud of smoke for 4 seconds. Enemies within the smoke cannot see outside of it.

Dashing towards an enemy champion grants 2 stacks of True Grit. Each bullet hit on an attack reduces Quickdraw’s cooldown by 0.5 seconds.

Enemies damaged by the shell’s initial impact do not take damage from the explosive cone. 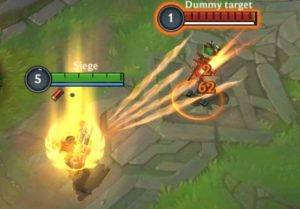 The auto-attack of Graves is unique.  He uses a shotgun with two barrels. He has to reload after 2 shots. The time between those shots and reload is influenced by attack speed.

His attacks spray in a small AoE. Enemies close to his shot will be hit by more bullets but receives less damage for each additional bullet. Each bullet can only hit an enemy once.

Non-champions hit by Graves’s auto attack are knocked back when hit by multiple bullets. This allows Graves to easily kite jungle camps and maintain high HP levels. Remember to kite towards the next jungle camp in order to maintain his 3rd, Quickdraw stacks.

Your auto attacks are considered as skill shot projectiles so the enemy tanks can body block your auto attacks. When facing a team composition with multiple tanks, consider doing the bruiser build so you will be able to shred enemy tanks while being able to tank some damage as well. 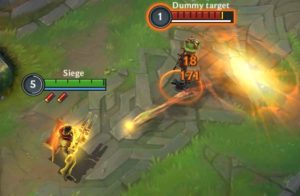 Because of its mechanic which makes the bullet return faster when hitting a wall, it is efficient to always try to use End of the Line when the enemy’s back against a wall in order to burst them down. You can position yourself to do so with the help of your 3rd, Quickdraw. 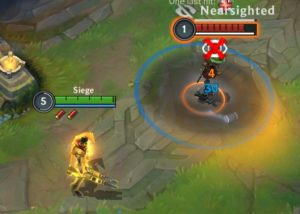 Smoke Screen is a soft crowd control that briefly slows affected opponents and makes them nearsighted. Nearsighted opponents will only be able to see inside the smoke Screen.

Use Smoke Screen as a soft zoning tool in the jungle and in clashes. As a zoning tool, you will discourage enemies to walk through the smoke Screen because they will be punished if they’ll go through it.

Throwing Smoke Screen in the middle of the clash disorients the enemy and makes them unable to dodge skill shots. Additionally, most players will choose to run away from the smoke screen which will give you time to hit them while they try to escape the Smoke Screen. 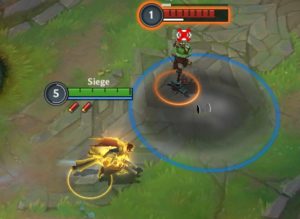 Quickdraw is Graves’s mobility tool. It is a short dash that can be used to pass through narrow walls. He gains bonus armor, Grit,  for each cast and gains twice the stack when Quickdraw is cast towards an enemy champion. The bonus armor stacks up to eight times and can be maintained by damaging non-minions. (Champions, jungle monsters, Epic monsters, turrets).

Casting Quickdraw grants Graves an extra ammo charge and each bullet that hits an enemy reduces the cooldown of Quickdraw by half a second.

Quickdraw is essential for kiting with Graves and for placing him in the perfect position to cast his 1st, End of the Line.

The bonus armor, Grit, only lasts for a short while. Maintaining Grit stacks is essential for an easy early game for Graves so remember to kite the jungle camps towards the next camp to reduce downtime between clearing them and maintain the Grit stacks at a high amount. 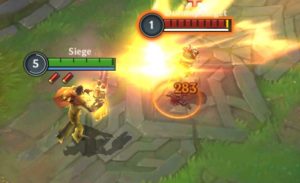 Collateral Damage is another AoE burst damage ability. It has a decent range on it and can be used to snipe escaping enemies. However, the damage from the initial hit is stronger and is a good addition to Graves’s burst damage combo.

The beauty of Grave’s jungling is that he can clear the jungle without any reduction in his health thanks to his passive’s mechanic that pushes away jungle monsters when he uses his auto-attacks.

You can successfully do an early ganks if your teammates have some form of crowd control. Otherwise, you’ll only find success on overextended lanes. If there are no opportunities, just power farm or invade if the enemy has a weak early game jungler like Amumu or Shyvana.

Always keep your Grit passive stack up which grants bonus armor by timing the activation of your 3rd, Quickdraw just before the Grit stacks disappears in between camps. By having your Grit stacks up, you’ll always have high health and this also makes you strong against invades if the enemy is an AD champion.

Graves snowballs extremely well but he has weak objective control. Make sure to babysit and countergank your mid and Dragon lane so they’ll be able to support you when the first Dragon spawns.

Graves is a mid game powerhouse who plays like a fighter and an ADC at the same time. If you have a successful early game, you’ll most likely be blowing up enemies here and there.

But if you and the enemy team are more or less on equal footing in the mid to late game, you should play it safe and be more like an ADC especially if you have no stacks of Grit yet.

Attack whoever is in front of you and stay close to your support or tank allies. Once your team gains the upper hand and you have more than 5 stacks of Grit, you can begin to chase enemies.

Always look to use your 2nd, Smoke Screen on the enemy ADC. A good placement of this ability will prevent the enemy ADC from attacking and will force them to move out of the Smoke Screen before being able to attack again.

Janna is a great support for Graves because she has the team fighting utilities which Graves has not and its 3rd, Eye of the Storm, buff works well with Graves’s auto attacks.

Orianna is the Queen of the mid lane. She almost always has lane priority so she can support you on invades and scuttler duels. She can speed you up, grant you a shield, and knock enemies together for a devastating combo together with your abilities.

Marksmen are Evelynn’s favorite prey and Graves is no exception. Try to ward their jungle to keep track of her path and avoid her at all cost. Buy an early hexdrinker and upgrade into Maw of Malmortius because you have no natural counter to her AP burst damage.

Graves has a weakness for charming champions. Ahri can burst him down, she is impossible to kill when she has her ultimate and Graves can never overextend because her charm will make quick work of him.

Here are some pros and cons if you are playing with Graves in Wild Rift.

FAQ's About Graves in Wild Rift

How good is Graves in Wild Rift?

Graves is a (Tier A+) champion. He is a good pick in most situations and he can easily dominate in many matchups.

What role / lane should I play with Graves in Wild Rift?

Graves is usually played as a jungler. Although, he can be picked in the Baron lane or Middle lane as well.

What abilities do I level up with Graves?

His 3rd, Quickdraw is acquired at level 1 for the additional ammo, Grit stacks, and to help with kiting but it is maxed second after 1st, End of the Line which is maxed first for the burst damage. 2nd, Smokescreen is maxed last as it provides enough utility at level 1.

What items should I build with Graves?

Black Cleaver and Phantom Dancer is his core items when he is played as a bruiser. If snowballing hard, he should be built with Youmuu’s Ghostblade and Duskblade of Draktharr so he can delete enemies faster.

What Runes should I use when playing as Graves?

Fleet Footwork – Works well with Graves’s kiting play style because of the movement speed bonus it provides. Electrocute is best for the Assassin build for the additional burst damage. His other runes are Brutal, Hunter – Titan, and Mastermind.

What are the ways I can use Grave's ultimate, Collateral Damage?

Collateral Damage is a great single target burst damage. It also deals a good amount of AoE damage so you can use it in conjunction with your team’s abilities for a wombo combo. You can also use it defensively as it knocks you back.