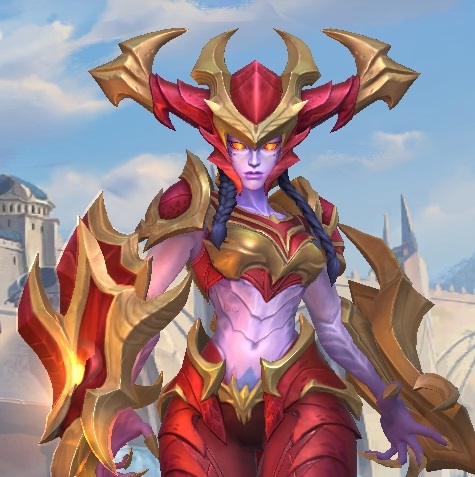 Best Shyvana Wild Rift build guide for Season 7 Patch 3.5 of WR. With our Shyvana guide you will learn which items to build, runes to select, skill order, who counters Shyvana, and how to use abilities properly.

Shyvana is a creature with the magic of a rune shard burning within her heart. She can take her true form as a fearsome dragon, incinerating her foes with fiery breath. Shyvana is an AP-type jungler who excels at dealing mixed damage and taking down drakes for her team. She turns into a formidable late game monster herself once she secures her drakes.

Here are Item Build Recommendations that works on this champion and which are the best build for Shyvana Wild Rift in this patch.

This is the standard build on Shyvana which plays her as a bruiser with items that make her tankier but still be able to do damage, although not as much as the mage build. This is the appropriate build to do if you have an AP-type top laner who doesn’t have much peeling ability like Akali or Zed.

Blade of the Ruined King is becoming popular on Shyvana as a first or second item since its on-hit damage has been buffed from 6% current HP to 9% current HP. It means that with one 1st, Twin Bite, you can shave off 18% of your target’s current HP. That’s OP as heck. Build this item if you are snowballing hard or build it instead of Trinity Force if you are against two or more tanks.

This was the standard build for Shyvana which turns her into a mid to late-game nuker but it was nerfed hard making it less viable. Still, he has adequate DPS and burst damage thanks to the synergy between Nashor’s Tooth and Twin Bite but this build has scary burst damage because of her Dragon form E, Flame Breath. You can still use this item build if you have a tank Baron laner and tank support.

Runes for Shyvana in Wild Rift

Smite allows you to Jungle with its Hunter License passive and once you take down a few jungle monsters, you can upgrade it. Upgrading it into the Blue or Red Smite is your choice but as a rule of thumb, upgrade to the Blue Smite when ahead and upgrade into the Red Smite if facing against a tough early game jungler like Lee Sin or Olaf.

Flash grants you the flexibility to make insec like plays with your ultimate, Dragon’s Descent or to dive towers then escape safely with it.

Fury of the Dragonborn

Dragon Form: Strikes in a larger area and applies on-hits to all enemies.

Deals 30 magic damage (30 + 25% bonus AD) per second to nearby enemies and hastes Shyvana by 30%, decaying over 3 seconds. Attacking extends the duration of Burnout by 4 second.

Launches a fireball that deals 78 magic damage (60 + 30% AD + 40% AP) to enemies hit and Scorches them for 5 seconds. Shyvana’s attacks on Scorched enemies deal bonus magic damage equal to 3% of their max Health.

Acquiring 300 stacks of Draconic Bloodline, grants Breath of the Infernal, converting the damage dealt to Scorched enemies to True Damage while in Dragon form.

Passive: Generate 1 Fury per second and 2 Fury per attack. At 100 Fury Shyvana can cast Dragon’s Descent. Shyvana remains in Dragon Form until she has consumed all of her Fury.

Active: Transform into a Dragon, gaining 15% omnivamp and flying to a target location. Enemies along Shyvana’s path take 150 magic damage (150 + 80% AP) and are knocked towards her landing point.

Innate: Fury of the Dragonborn

Shyvana’s passive grants her bonus damage against Elemental Drakes. Together with the Mastermind Rune, she will deal 30% more damage against Drakes. This allows her to take down Drakes without the enemy team even realizing it.

Shyvana gains the following bonuses for taking down the Elemental Drakes: 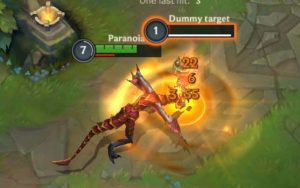 Twin Bite empowers Shyvana’s next attack to deal 2 attacks in quick succession. The second attack deals less damage but both attacks apply on-hit effects which makes Shyvana a great carrier of on-hit items like Nashor’s Tooth. And this is why Shyvana deals so much damage when she uses Twin Bite after hitting enemies with her 3rd, Flame Breath as its scorched effect is applied twice.

Twin Bite is an auto-attack reset. So, if timed correctly, it’s like attacking the enemy thrice in an instant.

This ability’s cooldown is reduced every time Shyvana auto attacks.

This ability is great for stacking Fury fast.

In her dragon form, her empowered attack is dealt in an area in front of her. Killing the Mountain Drake grants this ability a slow and that slow applies to all enemies damaged in the area. 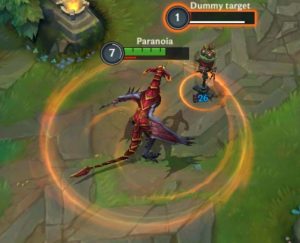 Auto attacks extend the duration of this ability and when in Dragon form, the size of the ability scales with Shyvana’s larger size. 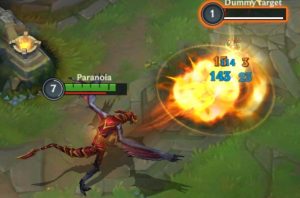 Flame Breath is an AoE skill shot that deals magic damage and marks enemies hit with “Scorched” status. The Scorched enemies are dealt bonus HP% based magic damage that procs as on-hit effects on her auto attacks. This makes it synergize well with her 1st, Twin Bite.

In her dragon form, Flame Breath explodes when it reaches an enemy champion or max distance. The explosion then deals magic DPS on enemies inside the explosion radius while Scorching them.

The upgraded version of Flame Breath turns the bonus damage on Scorched enemies into true damage. 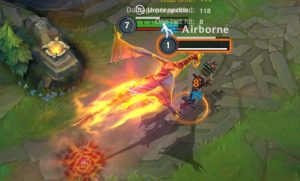 Dragon’s Descent deals AoE magic damage and knocks enemies airborne towards her target location then transforms Shyvana into her Dragon form. Shyvana has a short window where she becomes unstoppable while transforming so you can use it to dodge crowd controls.

In her Dragon form, Shyvana becomes way stronger. She becomes larger, her basic abilities are enhanced, and she has more health. She can only activate Dragon’s Descent when she has max Fury which is obtained over time and by attacking. Using 1st, Twin Bite hastens this process. See to it that you have your ultimate ready before fights happen because you are mostly underwhelming without it.

When playing an even match, more so when playing a hard match, do not use Dragon Descent to initiate because there will be a large chance that it will only result in you being crowd-controlled to death. Although, there will be situations where you can do a Flash + Ult combo to knock an enemy or two into your team.

Shyvana is a scaling jungler. She has to focus on farming jungle camps so she can acquire the items that she needs to carry the game in the late game. Furthermore, she has no ganking tool outside her ultimate which makes her a poor ganker.

Start with the Raptors for a safe clear or start in the red buff for a two buff clear if you fear that the enemy will invade your jungle, which is a common thing against Lee Sin and Olaf.

Clear all jungle camps and avoid a scuttler fight. The dragon side scuttler is important since you scale through drakes but if you are going to die on a scuttler fight, there’s no point to it.

Still, keep an eye on the map so you can counter gank since you fairly hard, you can protect your laners if they are ganked but do not overextend since you have poor mobility and have no crowd control. Never overstay in lanes because you need to power farm.

Once you reach level five, you have a short window where you can use your ultimate to gank and still have your Dragon form in time for the first drake take. Look for the nearest lane and initiate a gank. If you fail, you’ll most likely burn summoner spells and force a recall. Afterward, take the turret or use the remaining time in your ultimate form to get a camp or two before you recall.

Shyvana is an excellent objective taker and team fighter in her dragon form. Never take objectives and fights if your ultimate is unavailable.

If your team reaches objectives first, immediately activate your ultimate, Dragon’s Descent to take objectives quickly. In lower elo, you’ll most likely kill Drakes or Baron even before the enemy team realizes it. A nice trick you can do to help you pull off sneaky takes is to carry the Oracle Lens then activate it before you dive into the Drake pit from behind. If the enemy has wards in it, it will be deactivated, and given how fast you take dragons, the Drake will be dead or nearly dead once the Oracle Lens’s duration ends.

You can initiate team fights as long as your team is near you so you won’t get burst down by the enemy team. One of the best things about Dragon’s Descent is that it pulls enemies together into a single location so after you landed, you can immediately burst down multiple enemies with your 3rd + 1st combo.

The initiation capabilities of Malphite is unparalleled. A single ultimate from him combined with Shyvana’s Dragon’s Descent and 3rd, Flame Breath is an easy team wipe. His innate tankiness also allows Shyvana to focus on being a damage dealer instead of a space creator for her team.

Aurelion Sol and Shyvana is the double dragon combo. Aurelion Sol’s ganking capability and map presence fill the void in the team which is Shyvana’s lack of ganking. He can also clear his lane fast which leads to lane priority that in turn leads to opportunities in controlling the map easily.

Orianna is not as strong a strong ganker like Aurelion Sol but she brings Shyvana’s team fight potential to another level with her abilities. Dragon’s Descent with Command: Shockwave can easily delete the entire team and her shield and movement speed bonuses make Shyvana a whole lot scarier.

Lee Sin can make Shyvana’s life hard from the early game into the late game because he can out-pressure Shyvana in the early game and he can simply kick her to mess with her positioning. Lee Sin can also kick her out of the Dragon’s pit to deny Shyvana her Drake upgrades.

Olaf is another jungler who can easily bully Shyvana. Honestly, Shyvana can do nothing in the early game but avoid her unless her team helps her when she gets invaded.

Here are some pros and cons if you are playing with Shyvana in Wild Rift.

FAQ's About Shyvana in Wild Rift

How good is Shyvana in Wild Rift?

Shyvana is an (Tier S+) jungler. She is one of the best objective-oriented junglers who scales well into the late game.

What role / lane should I play with Shyvana in Wild Rift?

Shyvana is a fighter who is played as a jungler. She is weak at ganking and team fights without her ultimate but she scales extremely well into the late game especially when she secures her Drakes.

What abilities do I level up with Shyvana?

What items should I build with Shyvana?

Shyvana’s core items are Trinity Force which grants good around stats for fighters. With the Spellblade passive, she deals considerable amount of burst damage and Sterak’s Gage which grants her good amounts of HP and AD which scales well into the late game as well as the Lifeline passive shield grants her a shield when her HP dips below a certain level.

What Runes should I use when playing as Shyvana?

Conqueror – Grants increasing bonus damage for each unique hit you deal on enemy champions. This means that you get stronger the longer the fight goes on. If you are playing as an AP type Shyvana, you can use the Electrocute rune to deal massive burst damage with your 3rd + 1st combo. Her other runes are Brutal, Hunter – Titan, and Mastermind.