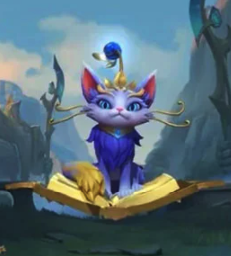 Best Yuumi Wild Rift build guide for Season 7 Patch 4.0 of WR. With our Yuumi guide you will learn which items to build, runes to select, skill order, who counters Yuumi, and how to use abilities properly.

Here are Item Build Recommendations that works on this champion and which are the best build for Yuumi Wild Rift in this patch.

For the Yuumi Wild Rift build, start off with a Spectral Sickle and finish quest as soon as possible. Then proceed by building these items, that are used to increase her AP which will also help the champion that she’s attached with. Also this further improves her healing capability.

Here’s another Yuumi Wild Rift build route that you can use at your disposal.

Not only that, Rod of Ages also grants her additional health and provides with additional Mana if she is damaged during a team fight.

Runes for Yuumi in Wild Rift

Aery: Since Yuumi is an ‘All-Hands-on-Support’ kind of champion, Aery can provide that extra bit of damage and either secure an evasive kill or give that one extra push for her Allies to take down the target.

Font of Life: As Yuumi has to periodically poke the enemy champions to restore mana and gain a shield, Font of Life becomes one of the best runes for that thing. Every attack by Yuumi, if followed up by the ADC, can restore a minimal portion of health, which in turn can save your life at times you won’t even imagine.

Gathering Storm: Countless times it has been mentioned that Yuumi is a total late game champion. This rune is one of the reasons. Every 3 minutes you will gain additional Ability Power, empowering all your abilities in the end game and making you a triumph factor.

Loyalty: A champion who sticks around to Ally champions all the time can activate nothing else but this rune. Being close to any ally gains you and your ally some additional Armor and Magic Resistance.

Manaflow Band: Yuumi’s 3rd, Zoomies, consumes an enormous amount of mana. And during the mid or late game, you can’t pretty much detach from your enemies to restore your mana. Hence this rune will gain you additional mana on every attack or empowered ability, upto a maximum of 300.

These two are the best spells you can equip for Yuumi Wild Rift.

Heal: Heal is a must spell for a hyper support like Yuumi who can simply dodge most of the incoming enemy fire and help the Allies who are near their demise. Heal spell can not only heal, but also provide a significant speed boost to finish off enemies.

Ignite: Being a support who is totally assisting the Allies, Yuumi can simply utilise ignite either as a finisher, or as a damage inflictor mid fight, which can help the ADC or Assassin secure the kill. Additionally, it can be used to provide your ally true vision over the hideous stealthy enemies.

Exhaust: If Yuumi is attached to a powerhouse like Kai Sa or Jinx, Exhaust spell will simply help them destroy the enemy laners by ensuring the kill of the opponents when they are low on health and are trying to evade.

This is the skill order that you should follow for Yuumi Wild Rift in general. By default Yuumi’s 2nd Ability is unlocked. First off you shall start by unlocking the 3rd Ability as it will be most useful all the way. Since you won’t be able to level up 3rd Ability anymore so upgrade everything the games asks you to except 2nd Ability since all you need it for is to Attach and Detach.

Make sure you upgrade your Ultimate whenever you can but max out your 3rd Ability first so that you can utilise it to help out your team casually conquer the battles.

The Shield follows Yuumi until broken, and will protect Yuumi’s Attached ally while she has one.

If Yuumi is Attached, the missile will be enhanced if travels for .75 second before impacting, dealing 60 (60+25% AP) plus 2% current health magic damage instead and slows champions by 20% for 1 second.

Active: Dashes to an ally champion and Attaches to them. While Yuumi is Attached, she follows her partner’s movement and is Untargetable except from towers.

Immobilising effects on Yuumi place You and Me! On a 5 second cooldown.

If Yuumi is Attached, ability affects her ally instead.

Healing now repeats the heal effect for the next 3 attacks or abilities within 5 seconds. This will affect Yuumi normally, or her attached ally if Yuumi is attached.

Yuumi can move and cast You and Me! and Zoomies while channelling.

Every 6 seconds, Yuumi’s basic attack restores a bit of mana and Yuumi gains a shield which is active till the time it is taken down by enemy champions. Yuumi’s shield can protect her and her allies if she is Attached to them.

When Yuumi is Attached to an ally, she cannot perform basic attacks and cannot gain a shield.

The missiles can be aimed by holding the ability button and can be used on a single target.

Being Attached to an ally Yuumi will not be able to move individually or perform basic attacks, but will constantly follow the host ally to every nook and every corner till the time she Detaches or the host ally dies.

Although Yuumi is untouchable when Attached, she is very vulnerable to enemies when on her own. Hence, being stunned, rooted, taunted or charmed while being Detached will cost Yuumi’s Second Ability (W) a cooldown of 5 seconds.

If Yuumi is Attached, the host ally is affected with the same effects and gains a huge advantage over the current opponent.

Yuumi emits out SEVEN waves of magic damage, out of which the first one deals the highest amount of damage and the rest deal lesser damage to the enemy champions. If the opponent or opponents are hit by 3 waves out of 7, the opponents will be rooted for a period of 1.75 seconds, making them pretty much vulnerable to all sources of damage.

All the waves can hit multiple champions and can also root up to 5 opponent champions. As usual Yuumi can’t perform basic attacks while casting ultimate, but meanwhile, she cannot even cast her Q, First Ability. But on the contrary she can cast her E, Third Ability or W, Second Ability, meaning, she can constantly keep bouncing off allies to hit a wider range with her ultimate.

Yuumi is really vulnerable in the early game and scales her SUPPORTIVE abilities mid to late game. As a Yuumi depending upon the champion match-up and the gameplay of the opponents, simply perform Auto Attacks and keep providing your ADC with a gigantic shield.

Whenever your ADC is engaging in a fight, simply heal them when they are low with your 3rd Ability and if need be, slow them with your 1st Ability.

In the late game, Yuumi should spam her ultimate whenever its needed be it in a team fight or in a 2v2 as Yuumi’s Ultimate has a cooldown of around a mere 30 seconds. Securing kills near Blue and Red buffs will be really easy with the help of Yuumi’s Ultimate to be cast on a majority of opponents rooting them and making them easy targets for a hyper-carry ADC or an Assassin.

We highly recommend using Yuumi Wild Rift with the following champions as they synergize well with her.

Darius: While playing Yuumi support, you will realise that you can only save people from death rather than keeping them alive during a whole showdown. Hence, a champion who simply needs bursts of healing and deal massive bursts of damage, per say Darius is a perfect combo, for if he gains five stacks for his Ultimate he is pretty much unstoppable.

While he is bonking down the opponents, the usual problem is his decreasing health, here comes Yuumi to save him when he needs it the most.

Jinx: Being a maniacal ‘One Woman Army’ Jinx can simply bully the opponents as much as she wants and Yuumi’s additional attack speed after every once a while will shape the path of victory for the whole team.

Yuumi can not only save Jinx, but also ensure that she dominates the team fights with small, gradual bursts of shields. And if Jinx has some item with good physical vamp, the game is as good as hers.

Vayne: Being a late game hyper carry, Vayne can dominate the lanes in even a 1v2 situations with her extremely empowered stacking ability. Hence after casting her own Ultimate, she can simply keep eliminating the opponents while gaining portions of health and additional attack speed, ensuring the wipe out of a whole team.

In this section, we’ll tackle some of Yuumi Wild Rift Counter

Blitzcrank: Being an unusual champion who can simply CREATE situations of elimination for the sake of his allies, Blitzcrank can simply hook champions and mess up the rhythm the opponents expect. But there is another catch. In order to counter Yuumi, a simple AP item like the Rod of Ages, can be added to the usual build.

Since Yuumi is entirely useless if her host champion is eliminated, the best way to counter her is to outpower her healing, meaning, dealing enough damage that her heal wouldn’t compensate. Hence inflicting an insuperable amount of damage and ensuring the kill of the host champion for instance, the ADC during the laning phase.

Braum: Yesterday’s friend turns today’s nemesis. Even though the friendship between the jolly shepherd and the explorer cat is pretty interesting. But the two of them are actual counters of each other during the showdown in Rift. Braum can simply use his 3rd Ability, Unbreakable, and not only obstruct Yuumi’s 1st Ability, but also her Ultimate.

Master Yi: Any champion who can acquire the Attack Rate equivalent to Master Yi can annihilate a whole team. Yuumi, being a support only champ, is not at all different. Yuumi’s 3rd Ability, Zoomies, has a considerate cooldown. No matter how much she heals, Yi’s constant attacks can easily break through that and ensure the kills in no time.

Here are some pros and cons if you are playing with Yuumi in Wild Rift.

FAQ's About Yuumi in Wild Rift

How good is Yuumi in Wild Rift?

In Wild Rift, Yuumi is (Tier S) champion. With a weak early game, she transitions into a sneaky, massive healing support.

What role/lane should I play with Yuumi?

She is generally viable in the support lane. But for fun, some players are seen to be playing Yuumi Mid as well.

What abilities should I level up First with Yuumi?

You should max out 3rd Ability, Zoomies first and then 1st Ability, Prowling Projectile second and in the end her 2nd Ability, You and Me!

What items are to be built on Yuumi?

What runes should I use on Yuumi?

You may generally use Font of Life or Aery, Gathering storm, Loyalty and Manaflow band.

Any tips to have a better game with Yuumi?

You have to simply keep saving your ADCs or other allies in the early game while making sure that you don’t give up your life. This way you will be able to scale your abilities. Once you have good enough items and have ensured that you can sustain yourself and your allies in a team fight, you may join in out of a sudden and heal the allies on the brink of death. This way, Yuumi is special and is the center of attention.

P.S: Don’t forget to take that shield with a basic attack.