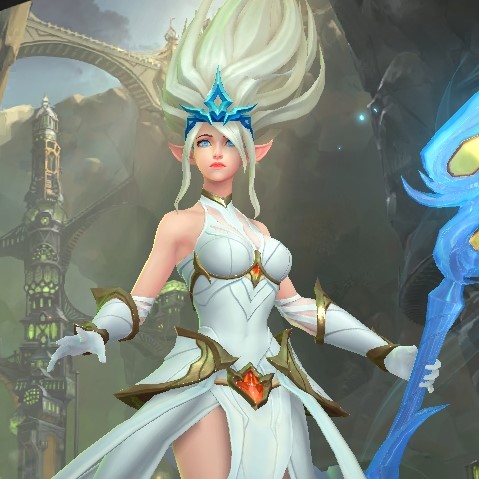 Best Janna Wild Rift build guide for Season 7 Patch 4.0 of WR. With our Janna guide you will learn which items to build, runes to select, skill order, who counters Janna, and how to use abilities properly.

Janna is a mysterious, elemental wind spirit who protects the dispossessed of Zaun, a beacon of hope for those in need. Janna is an enchanter support that excels in poking opponents, dealing damage and different forms of crowd control, as well as shielding, healing, and buffing her allies.

Here are Item Build Recommendations that works on this champion and which are the best build for Janna Wild Rift in this patch.

This is the standard Janna Wild Rift build which grants her a balance between utility and survivability.

Alternatively, you can opt for a support Janna Wild Rift build that also increases her defense. Aside from the carry, enchanters and mage supports are considered to be assassins’ or bruisers’ prey during clashes. With this, rest assured that Janna will not be eliminated quickly.

Runes for Janna in Wild Rift

These two are the best spells you can equip for Janna Wild Rift.

Exhaust slows down the enemy and reduces their damage output. It is a useful spell for protecting your carry against burst damage assassins and it can be used to secure kills as well.

Flash is necessary because Janna has no natural escape mechanism which makes her an easy champion to pick off. You can also do surprising moves with Flash in combination with your abilities.

2nd, Zephyr, is maxed first because it is your most reliable source of damage. 3rd, Eye of the Storm, is maxed next for its defensive and offensive utility but consider maxing it first if your ADC is ahead in the early game. It can even be maxed first when facing a hard lane. 1st, Howling Gale, is maxed last because we’re only getting it for the knock-up. The damage is secondary. Get a point in your ultimate when possible.

Summons a whirlwind that gains damage, range, and knock-up duration as it charges up (max charge at 3 seconds).

The whirlwind always reaches its destination in 1 second.

Passive: While Zephyr is not on cooldown, gain 6% Movement Speed and deal an additional 0 magic damage (25% bonus movement speed) with attacks.

Eye of the Storm

Calls forth mighty winds of salvation to knock back surrounding enemies and restore 100 Health (100 + 50% AP) to nearby allies each second for 3 seconds.

Tailwind grants Janna and her allies moving towards her bonus movement speed. This passive makes her unique because it makes her an enchanter who can roam in the early game. 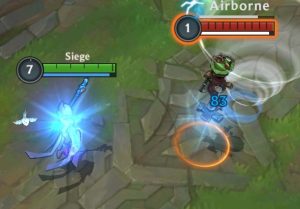 Howling Gale is a knock-up ability that is charged up first then launches after a certain period of time or when re-casted. It deals more magic damage, knocks up enemies longer, and travels further the longer it is charged.

Howling Gale should mostly be used as a short-range knock-up ability where you’ll release it immediately after casting. This method makes it a guaranteed knock-up and damage. Charging it up for longer periods of time makes it almost impossible to hit because of course, your enemy won’t stay in place if they see you whipping up a tornado.

If you want to hit an enemy with a fully charged Howling Gale, your best bet is to cast it under the bushes or by using it as a follow-up crowd control for your ally’s CC’s like Jinx’s Flame Chompers or Jhin’s Deadly Flourish. You can also achieve this effect yourself albeit to a lower degree using the slow of your 2nd, Zephyr.

When fleeing enemy champions, the instinct will be to cast Howling Gale towards the enemy but it is actually better to cast it towards the direction you are running to then, casting it after your enemy passes the tornado. This technique will cause most players off guard and could also potentially waste their Flash. 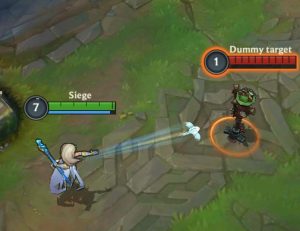 Zephyr, the bird that flies around Janna, grants her bonus attack damage based on her bonus movement speed. This makes Janna’s auto attacks strong in the early to mid game and it is recommended that you rush boots on her because the % scaling on this ability is strong for a support. It also has an active component which is a targeted ability that damages and slows the chosen enemy. However, the passive component of this ability is lost while Zephyr is on cooldown.

Due to how the passive works, walk towards the enemy and attack once before using the active part of Zephyr then do another auto-attack before backing away to optimize your damage. Due to your higher movement speed and slow effect from this ability, you will be able to poke enemies without being damaged yourself.

Zephyr, the bird, disappears during the cooldown of this ability. 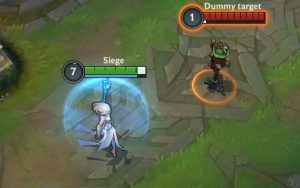 Eye of the Storm grants the target ally or turret a shield and an AD buff. It is especially strong on attack speed based ADCs because it will boost all the auto attacks of your target ally during its duration.

It is especially strong during the laning phase because your ADC will definitely win trades against the enemy ADC because your ADC gains a shield that will reduce the damage taken and at the same time, it increases their damage output.

It can also be used on yourself but it is better to hold it off to be used by your ADC because of how strong it is on them especially when combined with Ardent Censer.

The damage buff applies even if your ADC already “fired” his attack as long as Eye of the Storm is cast before the attack lands. 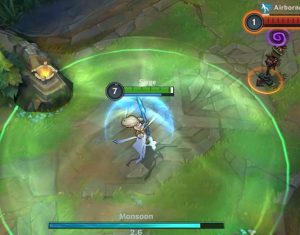 Monsoon is an AoE knockback and heal ultimate ability. It is primarily used for its knockback to push away enemies and disengage team fights. Its heal is just secondary because you need to stay put and channel it and it puts you in a vulnerable position because you are still squishy even with the healing effect.

You can knock an enemy back to your team by executing a Flash + Ult combo which will bring one or two enemies to your team while pushing back the rest.

Just be careful when you cast Monsoon because you might unwittingly save your opponent.

Janna is an excellent babysitter in the early game. She can force the enemy to disengage thanks to her 1st, Howling Gale and keep her ADC’s HP to a healthy level by shielding them using her 3rd, Eye of the Storm before they take damage.

She can also harass enemies effectively thanks to her 2nd, Zephyr’s high damage output and slow. But Janna has low HP and she does not have a heal outside of her ultimate so only poke the enemy if you are sure that they cannot fight back.

Janna pairs well with late-game ADCs because she has no good all-in but she is a great defensive enchanter so the game plan for a Dragon lane with Janna is to simply farm to scale into the mid and late game.

Even in the mid and late game, always stick with your ADC unless they are farming a big wave under your turret. If that happens, support your mid or your jungler.

If your jungler is roaming, near the river, use this opportunity to ward important objectives that are going to spawn. For example, ward the Dragon pit a minute before it spawns. In the late game, always ward the Baron pit.

Prioritize the lives of your carries. Never use your 3rd, Eye of the Storm on yourself. If your ADC is attacking someone, shield them to buff their AD as well.

If the enemy team got the jump on your team and initiated on your ADC or APC, pop your ultimate, Monsoon immediately then look if using your abilities would be more beneficial because your healing can be easily countered by Grievous Wounds.

It is highly recommended using Janna Wild Rift with the following champions as they synergize well with her.

Jinx has one of the highest attack speed in the game so she benefits a lot from Janna’s 3rd, Eye of the Storm. She also requires a lot of peeling that Janna can provide.

Kai’Sa is relatively on the weaker side in the early game because she needs her evolutions to be effective so a defensive enchanter like Janna works well with her.

In this section, we’ll tackle some of Janna Wild Rift Counters.

Janna is weak against crowd control and pickoffs so Blitzcrank’s Rocketgrab and his combo can make short work of her. Play safely behind minions when against him.

Leona has strong early game all-ins which can easily put Janna and her ADC in danger. You have to use your 1st, Howling Gale perfectly and only use it when needed when against this prolific diver.

Seraphine deals a lot of poke-type damage and she also has a shield that can also heal when echoed so she can be an annoying enchanter to deal with especially given the fact that Janna does have a heal before her ultimate.

Here are some pros and cons if you are playing with Janna in Wild Rift.

FAQ's About Janna in Wild Rift

How good is Janna in Wild Rift?

Janna is a (Tier S) champion. She is one of the safest champions to blind pick among Enchanters because she counters most engage supports and can do pretty well against other Enchanters.

What role / lane should I play with Janna in Wild Rift?

Janna is a defensive enchanter support played in the Dragon lane. She is excellent at baby sitting the ADC in the early game and making defensive plays for her team.

What abilities do I level up with Janna?

2nd, Zephyr, is maxed first because it is your most reliable source of damage. 3rd, Eye of the Storm, is maxed next for its defensive and offensive utility. It can even be maxed first when facing a hard lane. 1st, Howling Gale, is maxed last because we’re only getting it for the knock up. The damage is secondary.

What items should I build with Janna?

Janna should rush her boots first because her 2nd, Zephyr’s damage scales on her movement speed then her core items are Rod of Ages, Ardent Censer, and Harmonic Echo.

What Runes should I use when playing as Janna?

Aery – An amazing Keystone rune for enchanters because it enhances your poke damage as well as your shielding and healing effects. Her other runes are Weakness, Loyalty, and Pack Hunter.

When should I use my ultimate, Monsoon on Janna?

Monsoon should be used to disengage fights when your team has been initiated on or in any disadvantageous situations where your team might be killed. If you are feeling confident, you can try to use your ultimate to push an enemy into your team or turret by Flashing first then activating it.

Riots putting the wind back in her sales by buffing up her 2nd and 3rd ability.