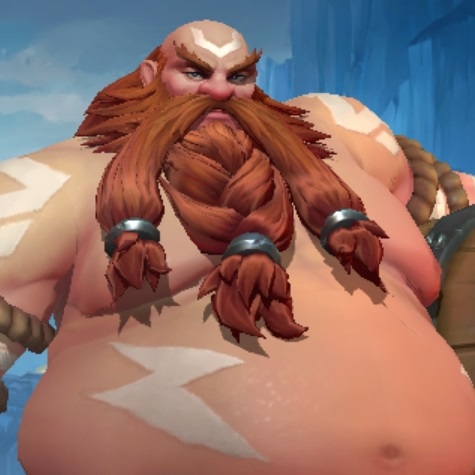 Best Gragas Wild Rift build guide for Season 7 Patch 4.0 of WR. With our Gragas guide you will learn which items to build, runes to select, skill order, who counters Gragas, and how to use abilities properly.

Equal parts jolly and imposing, rowdy brewmaster on his own quest for the perfect pint of ale, any appearance from Gragas must surely foreshadow drinking and destruction—in that order. Gragas is a versatile Mage Tank who can be played in every lane as a Baron lane tank, a mid lane nuker, a support, or a jungle.

Here are Item Build Recommendations that works on this champion and which are the best build for Gragas Wild Rift in this patch.

This is the standard build on Gragas which makes him a strong nuker throughout the game. This plays well when you have a tank or initiator in your team, preferably both.

This is a popular build this patch as Gragas needs to play as the tank and initiator when your team doesn’t pick one, usually to salvage a misdrafted team comp. Nevertheless, this build still deals a lot of damage and makes Gragas a lot tankier than with the mage build.

Runes for Gragas in Wild Rift

Smite is necessary because Gragas is mostly played as the Jungle. It allows you to safely farm the camps and secure buffs and Epic monsters like Drakes and Baron Nashor. Upgrading it into the blue or red smite is up to your preference. The Blue Smite helps secure ganks because of its slowing effect and the Red Smite helps you gain an advantage in duels because of its additional AP effect.

Flash is necessary for Gragas because it helps in engaging and escaping and it makes for a cool and almost unavoidable initiation with the E + Flash combo.

Ignite is a viable spell for securing kills when playing Gragas as a top or mid laner while as a support, Exhaust might be a better option as an additional layer of protection for your AD carry.

The first point will go to 2nd, Drunken Rage, because the empowered attack deals HP-based damage which is a great help for killing the buff monsters. We are going to max 1st, Barrel Roll, first because it is our main source of damage for our jungle clears and ganks. Then, we will max 3rd, Body Slam, next then 2nd, Drunken Rage, last because Body Slam has its cooldown scale down with its ability level. Of course, we are always investing a point in our ultimate, Explosive Cask, whenever possible.

Rolls a cask to target location that explodes upon re-casting or after 3 seconds. Enemies hit take 80 magic damage (80 + 70% AP) and are slowed by 40% for 2 seconds.

The cask ferments over the first 1.5 seconds, increasing the damage and slow amount by up to 150%.

The next attack within 5 seconds after drinking is empowered to splash nearby enemies for bonus magic damage equal to 20 (20 + 65% AP) plus 7% of their max Health.

Charges forward, colliding with the first enemy hit to deal 80 magic damage (80 + 60% AP) to nearby enemies. Enemies hit are also bumped backwards, stunning them for 1s.

Body Slam’s cooldown is reduced by 3s if it successfully collides with an enemy.

Hurls a potent cask that explodes when it lands, dealing 200 magic damage (200 + 70% AP) and knocking enemies away from the explosion’s center.

The cask has a fixed travel time.

Gragas heals up when he uses an ability. This ability ties up well with his W, Drunken Rage which should be cast in between jungle camps or in between fights.

Thanks to this passive ability, Gragas can stay healthy between clearing and ganking. When played properly, he would only need to recall to buy his items. 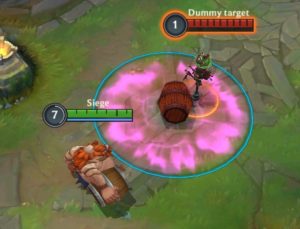 Gragas rolls out a barrel that remains on the ground and ferments for a few seconds then explodes when it expires or when recast. The explosion from the barrel deals magic damage and slows the enemy. The barrel deals more damage and inflicts a stronger slow effect when it ferments which you’ll know because the barrel will turn red when it happens.

Use your Barrel Roll on jungle camps as soon as you reach the distance to throw it at the camp to optimize your clearing.

You can hide the barrel on its way out when you immediately follow up this ability with your 3rd, Body Slam (1st + 3rd). You have to throw the barrel on the anticipated landing spot of the enemy. This combo when successfully pulled off will make the enemy receive the fermented barrel damage. Although, this is a bit tricky and high risk so when you are unsure, doing a 3rd + 1st combo is safer. The downside with the 3rd + 1st combo is that sometimes you will have to activate the explosion prematurely to damage the enemy with it. 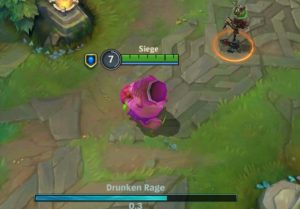 Drunken Rage reduces damage Gragas receives while guzzling booze then it boosts his next auto attack to deal splash magic damage to an area.

Gragas cannot attack or cast spells during this ability so make sure to activate it early in anticipation of a clash. 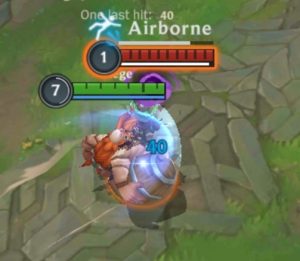 Gragas charges forward and slams his body unto the enemy, damaging them, knocking back, then stunning them.

Body Slam works smoothly with Flash which allows him to do surprising ganks and plays.

Body Slam also works on narrow walls which you can use to pursue or escape enemies. 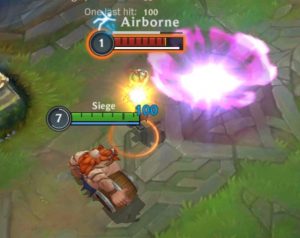 Explosive Cask deals a large amount of damage in a wide AoE and displaces enemies hit by it.

Explosive Cask is very unpredictable and can make or break your game so I don’t really recommend it as an initiation tool because you might even help the enemy by pushing them away from your team when they are already in a vulnerable position.

Explosive Cask is better used as a follow-up to your own combo or to follow up already crowd-controlled enemies so you can be sure of the outcome of your ultimate. Use to secure kills with the high damage and long, wide range.

This ability is also an excellent disengage tool to disperse your enemies when they have the upper hand in positioning or if they are dangerously close to killing your AD carry.

Gragas is a pretty safe pick wherever he is laned because of his passive that heals him once in a while when he uses an ability. This allows him to maintain a good amount of health in the laning phase.

Use 1st, Barrel Roll to harass opponents so that you’ll slowly lower their health to a point that they can be killed with an all-in combo.

If they fight back, use your 2nd, Drunken Rage to reduce the damage that you’ll receive then retaliate with your 3rd, Body Slam then auto-attack to use your empowered attack to deal massive damage.

When playing as a jungler, use your Flash to buffer your 3rd, Body Slam for surprising initiation when ganking.

In mid game and late game clashes, Gragas’s ultimate, Explosive Cask can displace enemies, making it easier for your team to engage on them one by one. You can also use his ultimate to disengage a losing fight and give your team a chance to escape.

Help your team by staying close to them and zone the enemy using 1st, Barrel Roll on chokepoints and allow it to brew. If they choose to walk over it, activate it to deal damage to them and slow them.

If you see an enemy low on health, do not hesitate to all-in on them because Gragas deals extreme amounts of damage especially if you are using the mage build.

Yasuo when plays in the mid lane, can benefit a lot from Gragas because of Gragas ganking presence, and Yasuo’s strong AD scaling will prevent them from building a full armor defense build against Yasuo = then suffer the magic damage from Gragas or a full magic resistance build then suffer from Yasuo’s strong AD scaling. Plus, there is the possibility of pulling off a beautiful wombo combo which is Body Slam + Last Breath + Explosive Cask.

Kha’Zix loves playing with a good Gragas because Gragas can create a lot of space for him. A well-placed Explosive Casket will Isolate enemies, making it easy for Kha’Zix to pick off enemies one by one.

Vi can face your only crowd control head-on with her ultimate, Assault and Battery. She can melt you down even in tank build. Avoid 1v1 duels with her at all cost. You have more impact in clashes so you’ll win if you can successfully dodge her in the early game.

Garen is a safe pick on the Baron lane against Gragas because he can survive his harass and he can rally his team behind him on clashes, nullifying Gragas’s team fight presence.

Here are some pros and cons if you are playing with Gragas in Wild Rift.

FAQ's About Gragas in Wild Rift

How good is Gragas in Wild Rift?

Gragas is a (Tier S+) champion. Gragas is an extremely versatile pick that can be used in a lot of team compositions. He can be played as an AP carry or as a tank at equal effectiveness.

What role / lane should I play with Gragas in Wild Rift?

Gragas can be played as a tank in the Baron lane, as an AP carry in the mid lane, or as either in the jungler. He can even be played as a support thanks to his versatility as a champion.

What abilities do I level up with Gragas?

The first point will go to 2nf, Drunken Rage, because the empowered attack deals HP-based damage which is a great help for killing the buff monsters. We are going to max 1st, Barrel Roll, first because it is our main source of damage for our jungle clears and ganks. Then, we will max 3rd, Body Slam, next then 2nd, Drunken Rage, last because Body Slam has its cooldown scale down with its ability level.

What items should I build with Gragas?

When playing as an AP carry, Gragas’s core items are Luden’s Echo and Infinity Orb. Luden’s Echo increases Gragas’s burst damage in the early game thanks to its Discordic Echo passive and Infinity Orb grants increased damage against low HP targets. As a tank, Sunfire Aegis grants AoE damage against enemies near its wielder and Iceborn Gauntlet increases his auto-attack damage thanks to its Spellblade passive.

What Runes should I use when playing as Gragas?

Electrocute grants bonus damage on combos, perfect for bursting down opponents and Grasp of the Undying is great for tank Gragas as it grants bonus damage based on his max HP and it also heals Gragas when it procs. His other runes are Brutal, Hunter – Titan, and Sweet Tooth.

How to I use Gragas's ultimate, Explosive Cask?

Explosive Cask has various uses. It is useful for initiating fights as it will scatter opponents, making it easier to pick them off one by one. It is also great for disengaging fights, as they could push enemies away from your team. Once you are advanced enough, you will be able to control where the enemy flies after being hit by Explosive Cask. If you want to reach that level faster, use the practice tool and experiment with dummies.

Currently, Gragas ultimate is much harder to land in Wild Rift, and this skills ia very import for him. Riots making this ability a bit faster so he can start the party a bit sooner.