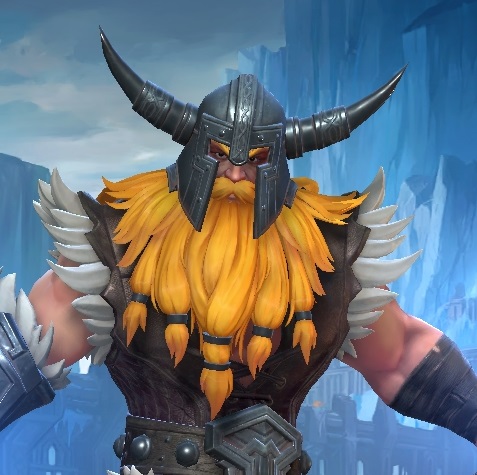 Best Olaf Wild Rift build guide for Season 7 Patch 4.0 of WR. With our Olaf guide you will learn which items to build, runes to select, skill order, who counters Olaf, and how to use abilities properly.

An unstoppable force of destruction, the axe-wielding Olaf wants nothing but to die in glorious combat. Olaf is a jungle fighter who excels in fighting fast and hard. He takes jungle monsters and objectives swiftly and has a great advantage in the early game making him a hard snowballer.

Here are Item Build Recommendations that works on this champion and which are the best build for Olaf Wild Rift in this patch.

This is the standard build for Olaf which builds early offensive items to take advantage of his strong early game and mid game.

This item build is for a top lane Olaf which is built to last longer in team fights.

Runes for Olaf in Wild Rift

Smite is a necessary tactic for Olaf as he plays the Jungle role. This allows him to farm the jungle faster and secure objectives. Upgrade with the blue smite as you are strong early and will play bully for most of the early and mid game.

There are many summoner spells that can fit Olaf but nothing comes close to the versatility which Flash can give because it can be used both offensively and defensively.

We will prioritize 1st, Undertow because it will help us clear the jungle faster, you won’t have to worry about your mana because we will have the blue buff for that. We will max 3rd, Reckless Swing next to reduce its cooldown and max 2nd, Vicious Strike last as its stats at level 1 is quite enough for most of the game. Get a point in Ragnarok whenever possible.

Olaf gains 1% Attack Speed per 1% of his missing Health.

Picking up the axe reduces Undertow’s cooldown by 4.5 seconds.

Attacks lower the cooldown of Reckless Swing by 1 second.

Olaf gains bonus attack speed which scales based on his missing health. This passive makes him stronger as his health drops, and when combined with his 2nd, Vicious Strikes and ultimate, Ragnarok, he can turn around a fight fast and even come out of the battle with more HP, to begin with. 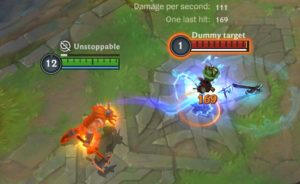 Undertow is your main poke and gap closer. Olaf’s axes slow down the enemy and picking it up reduces Undertow’s cooldown.

It is possible to permaslow your target by predicting where they will run before casting Undertow. By doing this, you will be able to pick up the axe along the way while chasing the enemy. A tip to do this more consistently is to delay throwing your axe by about a second so you’ll know the enemy’s path before throwing your axe. 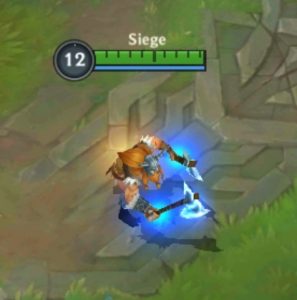 Activating this ability together with your ultimate when you are below 50% health will grant you an explosive amount of DPS and healing. 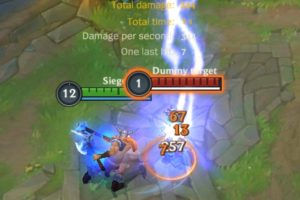 Reckless Swing is another gap closer. This ability makes you dash to an enemy and deal damage to the target. It deals true damage to Olaf as its cost and auto attacks reduce the cooldown of this ability.

Spamming this ability will obviously make your HP go down quicker but for Olaf, that’s a good thing because that will increase your attack speed. When you get dangerously low though, begin to think twice before casting Reckless Swing.

When you are underneath a bush and an enemy comes by, do not open with Reckless Swing because if you do and then they used Flash, the enemy will escape. What you should do is to auto-attack first then use Undertow and Reckless Swing after.

If you are laning in the Baron lane, you can use Reckless Swing to secure last hits because you’ll refund its cost if your kill your target with it. 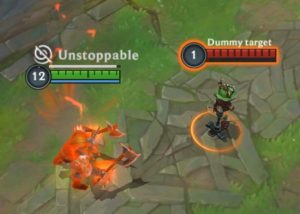 Olaf becomes literally unstoppable when Ragnarok is activated. He becomes immune to crowd control during its effect. Additionally, he gains increased attack damage. Bait your enemy’s crowd control abilities by diving headfirst to the battle like how a real Viking would.

You can activate Ragnarok while stunned or rooted but not while knocked-up or knocked back so be careful if you have an enemy Malphite or Alistar around.

You will lose the passive bonus armor and magic resist while your ultimate is active so activate it in combination with Vicious Strikes for the increased DPS and sustain.

One of Olaf’s strengths is his extremely fast jungle clear and formidable damage in the early game.

Start in the blue buff so you can spam your 1st, Undertow for most of your jungling then proceed to clear every camp that you will pass through. Don’t look for an early gank unless the enemy is overextended as you’ll throw away your jungling speed advantage if the gank turned out fruitless.

The better thing to do is to rush towards the scuttlers since the enemy jungler most probably can’t match up to you on a scuttler duel. If you get both of the scuttlers, the enemy’s ganks and map control will be a lot less.

Focus on power farming and proceed to invade the enemy jungle in sides that your team has priority and if you see the enemy jungler ganking on the other side. If the enemy is ganking near you, immediately respond and countergank. Junglers with weak ganking abilities are usually great countergankers and Olaf is no exception to that rule.

In the middle and late game, you should have a big net worth thanks to your power farming and objective control. Olaf is most powerful in the mid game once he has a substantial net worth lead over the enemy but this falls off in the late game when the enemy catches up on items and gets Grievous Wounds.

Olaf can easily eat up objectives and even do sneaky dragon takes alone on low elo.

It can be fun running down on enemies with using Olaf, especially when his ultimate, Ragnarok, is activated but it will be the death of you if you overextend since Olaf’s bonus resistances are disabled while his ultimate is active so you can be bursted down faster than you can recover your health. Be mindful of your teammate’s positioning.

In the later stages of the game, peel for your ADC instead of running over enemies.

Fizz in middle lane is an amazing partner with an Olaf jungle because they both have strong early game and can snowball disgustingly hard. If they both have a successful early game, expect to win the game 9 times out of 10.

Aurelion Sol has great ganking and map presence which will help your team ease on the lack of ganking pressure of Olaf. With the ganking of Aurelion Sol and jungle invades of Olaf, the enemy team will suffocate from their map feeling so small.

Jax has a strong early game as well but scales way better than Olaf could. if Olaf cannot win the early game against Jax, he would most likely lose the game.

Having an enemy Garen will severely limit your play options and damage output since you get stronger as your HP decreases but he can execute you when you are below half HP. Consider buying Guardian Angel earlier when against Garen.

Here are some pros and cons if you are playing with Olaf in Wild Rift.

FAQ's About Olaf in Wild Rift

How good is Olaf in Wild Rift?

Olaf is an (Tier A+) champion. Due to his early game strength, he can snowball for his team extremely well leading to a lot of easy victories. His damage output is also top tier among fighters.

What role / lane should I play with Olaf in Wild Rift?

What abilities do I level up with Olaf?

We will prioritize 1st, Undertow because it will help us clearing the jungle faster, you won’t have to worry about your mana because we will have the blue buff for that. We will max 3rd, Reckless Swing next to reduce its cooldown and max 2nd, Vicious Strike last as its stats at level 1 is quite enough for most of the game.

What items should I build with Olaf?

Divine is Olaf’s core item which grants a good amount HP based attack damage. Next, Sterak’s Gage is a solid core item option since it grants a large amount of health and AD and it increases Olaf’s survivability two-folds thanks to its Lifeline passive which grants a shield when the wielder’s HP drops to a certain percentage.

What Runes should I use when playing as Olaf?

Conqueror increase your damage as the fight goes on which is exactly Olaf’s MO. His other runes are Hunter – Vampirism, Hunter – Titan, and Mastermind.

How can I avoid dying on Olaf?

Olaf’s playstyle is playing close to low HP. To avoid dying, focus on fights that are near your allies and do not overcommit on chases. When you choose to fight, fight to the death without thinking twice while your 2nd, Vicious Strikes is active.