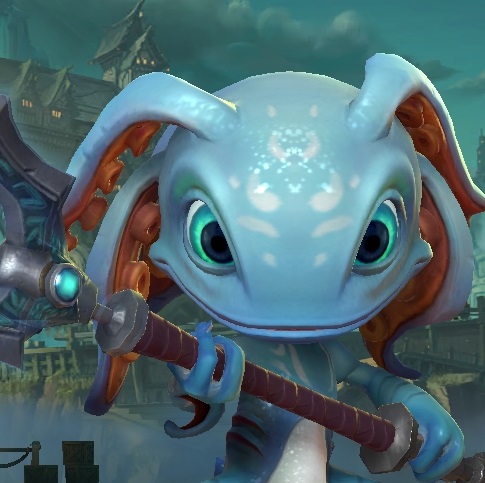 Fizz, The Tidal Trickster, is an amphibious Yordle who loves to confound his allies and enemies alike. He seems to have control over the beast of the deep, who he baits to consume fools who try to cross him. He is a very mobile mid lane assassin who excels in moving across the battlefield safely and bursting down his enemies.

Killing a unit with the first attack reduces Rending Wave’s cooldown to 1 second.

Vaults to target location, becoming untargetable while balanced on the trident. After 1.2 seconds, Fizz hops down with a large splash that deals 70 magic damage (70 + 70% AP) and slows enemies hit by 40% for 2 seconds.

Re-cast: Hop down early towards a direction, but deal damage in a smaller splash that does not slow enemies.

Chum of the Waters

Launches a fish in a target direction that attaches to the first champion hit and reveals them. After 2 seconds, the fish attracts a shark that knocks up its target and knocks away enemies around them. The farther the fish travels, the larger the shark it will attract, dealing 150 to 300 magic damage (150 + 60% AP to 350 + 120% AP) and slowing enemies hit by 40% to 80% based on the size of the shark.

Fizz’s passive is a on hit effect that helps you land the killing blow on minions when you mess up your last hit. It also increases your overall DPS in the long run. 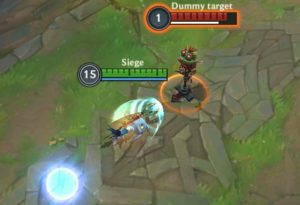 Urchin Strike is a gap closer that deals significant amount of damage and apply on-hit effects.

Keep in mind that Urchin Strike will always run its full range no matter how close you are to your target, it could lead to you being out of position which can be dangerous if your flash and your W is on cooldown. 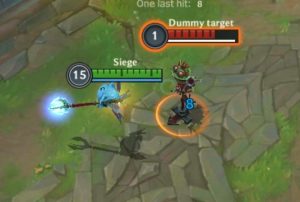 Rending Wave is your last-hitting tool in the early game. This skill’s cooldown is reduced to 1 second if you use the first attack after activating it to kill a minion. It also grants a DPS boost after the first hit, further adding to the DPS from your passive.

Rending Wave is also an auto-reset. Meaning, you can attack again immediately after casting the spell. an autoattack-W-autoattack combo will deal significant damage to your enemy which is especially useful during the laning phase. 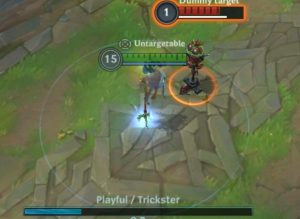 His E is his all in one, outplay, disengage/engage/dodging tool. The first cast allows him to jump a short distance which is capable of jumping past walls, becoming untargetable which makes him invulnerable against all forms of attacks. After a few seconds or when recasted, Fizz will drop and deal AoE damage with a slow effect  if the full duration of Playful is utilized.

Playful/Trickster deals more damage if you don’t choose where you want to jump down. Fizz will simply jump down on the same area he was. This will deal more damage but at the risk of being avoided by the opponent.

Playful/Trickster is better used as a disengage tool and should be used as an engage tool sparingly because this skill is what makes a good Fizz player an annoying and tilting one. This ability will save your life countless of times.

R | Ultimate: Chum of the Waters

Fizz launches a fish that attaches to an enemy and it will attract a shark after a while. The shark will deal significant damage to the enemy hero and those around it while knocking up the main target and knocking those around him away.

It is a strong nuke that deals more damage the farther the distance the Chum traveled and it can be used as initiation that is best casted under the fog of war or under brushes for the surprise factor. It travels a moderate speed that is relatively easy to avoid when casted from afar.

The shark will still come up to eat the fish even if no one is attached to it, and can still damage enemies that will get caught by it. This feature of Fizz’s ultimate can be used to clear minion waves fast which is extremely useful when defending the Nexus.

Here are Item Build Recommedations that works on Fizz

This build is the standard build for Fizz.

This build is focused on increasing Fizz’s DPS when faced with a tanky lineup where 3 or more of the enemy champions are impossible to kill with one combo. This build also allows Fizz to take down towers fast. This is the more viable build when playing as a jungler as well.

Ignite is your offensive summoner spell that you will use alongside your combo to secure kills with its true DPS and Grievous Wounds effect for 5 seconds.

Flash is necessary spell for Fizz because you are a melee mage. Flash is your insurance that you can get out of combat when faced with a dangerous situation.

Get W, Rending Wave first to secure your last hits easier. But if think you are going to be bullied early, get your E, Playful/Trickster instead.

Max your E, Playful/Trickster first to lower its cooldown and get your Ultimate, Chum of the Water whenever possible.

Fizz is a melee mage champion so expect to lose most match ups in the early game. Being a melee champion in the middle lane, expect to be harassed heavily by ranged champions. Your goal in the early game is to survive and wait it out. You have strong level 3 and level 5 power spikes.

Power spike – A point in the game where your champion gains significantly more strength and be able to dish more damage.

Your first mission in the game is to reach level 3 with a good amount of health. It’s okay to be pushed back under your turret. You can get all the minion last hits under your turret using your W, Rending Wave.

When you reach level 3 where you’ll have access to all your abilities. You can start fighting back now. Use the early game trade combo to activate Electrocute and deal good amount of damage. If you successfully pull off a full combo, you’ll be able to kill your enemy with a second combo + Ignite but do not force it.

Wait for your enemy to  make mistakes or waste their CC or movement abilities before going in. Do not hesitate to use your E, Playful/Trickster to evade the enemy’s CCs. You can always do your combo later.

But if you manage to evade the enemy’s CC without using E, Playful/Trickster. Do your combo, they won’t be able to fight back.

Once you reach level 5, you’ll be able to kill a full HP enemy non-tank champion if you manage to pull off a full distance ultimate. But you can safely kill any 3/4 HP enemy with a full combo.

Fake a gank by walking to a bush, if your enemy proceeds to focus on last hitting, they’ll be vulnerable to your ultimate.

You can either choose to kill your enemy laner and gain more advantage or gank another lane, preferably the dragon lane.

If you recall back to base to buy an item, look for an overextended lane because your enemies will less likely suspect a gank coming from you if you recall compared to just walking down the lane.

Always look for opportunities to kill every time your ultimate is available but don’t forget to clear the minion waves in your lane before ganking.

Fizz is an AP assassin and so you’ll have to be opportunistic when choosing when to engage.

Wait for your tank to initiate fights and only use your ultimate if you are sure that it will hit a squishy champion. Using your ultimate on tanks or fighters is a waste.

Also take a mental note of who recently used their Stasis Enchant because it is a hard counter to your ultimate.

Use your abilities in quick succession then hide while its on cooldown. Look for another way to flank the enemy or hide behind your tanks then enter the fight again once your abilities are available.

Shyvana’s Dragon’s Descent knocks enemies on its path towards her target area and brings them closer together which makes them all vulnerable to your Chum of the Waters.

Malphite‘s Unstoppable Force is a superior initiation tool that can be used to set-up a great Chum of the Waters. This combo can potentially Ace a team.

Yasuo’s Last Breathe can be used on an enemy champion that is knocked-up by Chum of the Waters. This combo ensures the death of the unlucky target.

Ahri has more than enough mobility from her Spirit Rush, to keep up with Fizz. And one Charm from Ahri can spell the death of Fizz. Although, without her Spirit Rush, Ahri is fish food for Fizz. She has the range advantage and will always try to bully you out of the lane. Keep your head down under the turret and bait her charm out before engaging on her.

Orianna is a lane bully which is harder to deal with than Ahri. She has extremely long range with her skills which has low cooldowns. You can never burst her down because of her shield and she has fast movement speed. Do not expect to win the lane against Orianna so pressure other lanes instead because she has less ganking capabilities than you but she is much stronger on team fights compared to you.

Zed is an equal match up with you so it will boil down to whose more skilled. This type of lane is called a skilled matchup. Hide behind your minions so if you get hit by his shurikens, you’ll receive less damage. Wait for him to use his shadows before engaging on him. If you hit him with your ultimate, wait for the knock up before getting close because he will try to evade the shark using his own ultimate. And if you are hit by his ultimate, dodge his abilities using your E, Playful/Trickster. Do not use Playful/Trickster to avoid the mark damage because it will still damage and kill you.

Here are some pros and cons if you are playing with Fizz in Wild Rift.

How good is Fizz in Wild Rift?

Fizz is an (Tier B) champion. He is a safe pick who can handle all matchups and if you enjoy his playstyle, you’ll be able to be good enough with him to be capable of defeating S tier champions.

What role / lane should I play with Fizz in Wild Rift?

Fizz is a melee mage assassin that is played in the middle lane. He has a strong level 5 power spike and is fairly mobile which means he is a good ganker and that makes him a great mid lane pick. He can also played as a jungler but that’s an off-meta choice.

What abilities do I level up with Fizz?

His E, Playful/Trickster is the ability he has to max first because it is Fizz’s main outplay tool. It allows him to dodge enemy’s abilities plus it deals a lot of damage to boot.

What items should I build with Fizz?

Fizz can be build a wide variety of AP items but his core items are Lich Bane and  Rabadon’s Deathcap which grants him huge burst damage.

What Runes should I use when playing as Fizz?

He works best with the Electrocute Keystone Rune because he is a burst damage champion. His other runes is Brutal, Regeneration, and Hunter – Genius.

Any tips so I can aim my fizz's ultimate better?

Missing Chum of the Waters is frustrating for Fizz players. To increase your chances, make sure that the enemy is not focused on you when you cast it. You can do it easily by casting it under the bush or when the enemy is fighting your allies. You can also hide the animation for your ultimate by casting your first ability, Urchin strike first then immediately casting Chum of the Water while in the dashing animation.