Jhin is a meticulous criminal psychopath who believes murder is art using his gun as his paintbrush to creates works of artistic brutality, horrifying victims and onlookers. Jhin is a long range AD carry caster which lays traps and kills enemies from afar.

Jhin’s hand cannon, Whisper, carries 4 shots before needing to be reloaded and fires at a fixed rate. (Attack Speed will be converted into Attack Damage). The final bullet will critically strike and deal bonus execute damage. Whenever Whisper crits, Jhin gains a burst of 3% movement speed (10% + 0.4% per 1% bonus movement speed) for 2s.

Launches a magical cartridge at an enemy, dealing 69 physical damage (45 + 40% AD + 60% AP) before bouncing to a nearby target that has not yet been hit. It can hit up to 4 targets and gains 35% damage each time it kills.

Fires a long range shot that stops on the first champion hit, dealing 79 physical damage (50 + 50% AD) to it, and 75% of that damage to minions and monsters hit along the way. If the target champion was struck by Jhin, Jhin’s allies, or Lotus Traps within the last 4s, they are rooted for 1s and Jhin gains Movement Speed as though he had crit them.

When Jhin kills an enemy champion, a Lotus Trap will spawn and detonate where they were killed.

Tap the cancel button to cancel the channel. 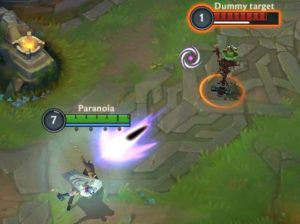 Jhin has a unique attack system. He has 4 bullets which fires at a fix rate and he reloads for a two and a half seconds (2.5s) after running out of ammo. He also reloads after 10 seconds of not attacking or using abilities.

His attack rate does not speed up with attack speed items but it will increase his attack damage instead. His fourth auto attack will always crit and deal bonus damage based on the enemy’s missing health and critical strikes increases Jhin’s movement speed.

You can have your fourth attack, the sure crit, handy for your next trade through postponing your reload by casting your other abilities. There is no timer to remind you of Jhin’s reloading but he will do an animation with his gun before the reload, giving you enough time to cancel it if you are aware enough. 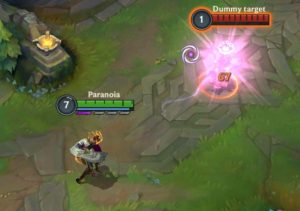 Dancing Grenade is what makes Jhin a strong laner. He throws a cartilage that bounces to nearby enemies which has not been hit yet, dealing damage to four enemies. Each bounce deals additional damage if the previous targets are killed. The bonus damage will activate even if the targets are killed by other means (your auto attacks, your teammates abilities, minions attack), not necessarily by the bounce, as long as it happens while the bounces are happening.

It is crucial to learn how to time Dancing Grenade to kill minions and hit the enemy champion because it could deal up to an additional 105% damage for a perfect execution of this ability which could easily burn 20-40% of the enemy’s HP. In combination of a fourth auto attack (AA4 for combos later), this will easily win you trade and the laning phase. 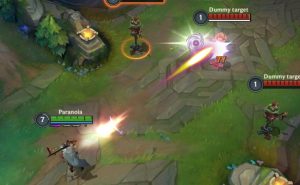 Deadly Flourish is one of the longest, if not the longest basic ability skill shot in the game so far. It passes through minions to deal only 75% damage and stops on the first champion hit. If the enemy champion has been damaged by Jhin’s basic attack, abilities or slowed by his traps, or damaged by an allied champion, the champion hit will be rooted as well.

Because of the root, it is a great high skill combo to land a Deadly Flourish unto an enemy champion who walked into a trap because it will deal a significant burst damage to the victim.

Deadly Flourish is also a great followup to your ally’s crowd controls to extend the time the enemy is CC’d to secure kills.

Do not hesitate to use this ability to secure last hits, especially cannons, when you are far away from the minions.

Flash can be used after casting Deadly Flourish as a defensive maneuver. The projectile will fire as usual, unaffected by the Flash and if it hits, it will hasten Jhin as if a crit was procc’ed due to Jhin’s innate passive. 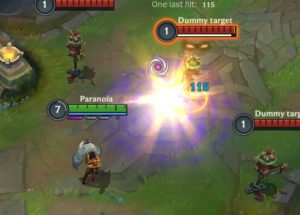 Captive Audience is a trap ability which is invisible, provides vision, and slows enemy as the initial effect then explodes dealing magic damage after a while. If Jhin scores a takedown on an enemy champion, it also triggers a trap which immediately explodes on top of their corpse.

Jhin is a fairly immobile champion so he relies on his traps to be safe during the laning phase. Spread your traps around bushes near the river to counter ganks and spread a few traps around the lane bushes for offensive opportunities. 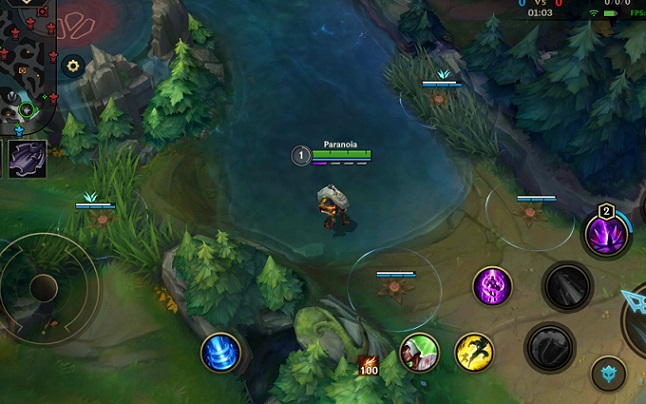 Place a trap on top of an enemy recently crowd controlled by an enemy then use your W, Deadly Flourish, to execute a high damage combo.

Jhin deals a lot of damage in team fights when the enemy team is caught in a strong crowd control like Malphite’s Unstoppable Force because when an enemy is killed with the help of Jhin, a trap will explode on its corpse and might trigger a chain reaction of AoE damage from this ability.

Those with a Teleport Enchant can teleport to the Captive Audience traps. 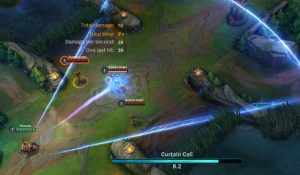 Curtain Call is a long range channeled ability. After a brief delay, you’ll get a bird’s eye view but it won’t reveal the fogged area. You can then recast the ability up to four times each second. The bullets reveals the area it travels and stops at the first champion hit, slowing and revealing them as well.

The bullets of Curtain Call deals damage in a small AoE, allowing it to damage clumped up champions and it deals more damage the lower the target’s HP is. The fourth bullet also critically strikes and is affected by the enhanced critical strike from Infinity Edge.

Curtain Call has two main uses. First to start a fight as warning shots. The shots will bring down the enemy’s HP, reveal them, and slow them before the fight begins so you’ll have an unfair advantage if they’ll want to go through the fight. This will usually discourage them from contesting the Dragon or Rift Herald. This is also useful for poking enemies while sieging turrets.

The second use, the more popular one, is to execute fleeing enemies. Use your ultimate after the enemy escapes your range and try to hit them with your W, Deadly Flourish first. Your ultimate deals a lot more damage the lower the enemy’s HP is so it is a great execution tool. Although, the enemy’s tanks or high HP teammates will try to block your bullets for their low HP teammates to escape. But of course, pulling off an execution using Curtain Call will always be satisfying.

Here are Item Build Recommedation that works on Jhin

This is the standard build for Jhin which focuses on making him scale into the late game and deal consistent critical damage. This build should be used when you are in equal grounds with the enemy’s carry in the early game or when you are sure you can outscale them in the late game. You should use this build when against Varus, Miss Fortune, and Ezreal.

This build focuses on increasing the armor penetration from the items Jhin build. This allows him to deal as much damage in the early game while the enemies has less defensive items and snowball from there. This item build works best when fighting against late game marksmen to build a good lead against them before they come online with their own powerspikes. Use this build against Kai’Sa, Vayne, Jinx, and Ashe.

Heal is now the go-to summoner spell for marksmen because it will also heal your support partner in lane and grant you a short burst of movement speed which might just be the thing you need to pull off a nice outplay.

Jhin is a very immobile AD carry and is quite helpless when reached by enemy melee champions so Flash is a necessary spell to escape dangerous situations.

Jhin maxes his Q, Dancing Grenade, first in order to maximize the damage output and lane pressure it provides then W, Deadly Flourish, is maxed next for the cooldown reduction and damage and E, Captive Audience is maxed last because it provides enough of its utility at level 1 and even if the damage scales well, it is not worth it to prioritize because it is an unreliable source of damage. Finally, get a point in your ultimate, Curtain Call, whenever possible.

The kill pressure from a Blitzcrank and Jhin lane is just immense because Jhin can constantly harass the enemy laners while Blitzcrank keeps them on their toes. When Blitzcrank lands a Rocketgrab, its almost always a sure kill because of the chain CC and burst damage this duo is capable of doing.

Ezreal is currently Jhin’s rival for the top marksman spot in Wild Rift. This is because of Ezreal’s strong early game in Wild Rift which translates into a strong late game as well. Jhin may have a stronger damage output but Ezreal has a simpler kit and more mobility. In the end, it all boils down to the individual player’s skill as well as their support’s but Ezreal currently have a little advantage even after the nerf he received.

Here are some pros and cons if you are playing with Jhin in Wild Rift.