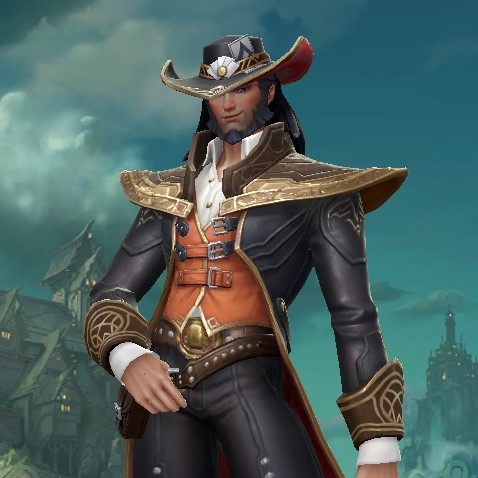 Best Twisted Fate Wild Rift build guide for Season 7 Patch 4.0 of WR. With our Twisted Fate guide you will learn which items to build, runes to select, skill order, who counters Twisted Fate, and how to use abilities properly.

Twisted Fate is an infamous cardsharp who rarely takes things seriously. He gambled and charmed his way across much of the known world, greeting each day with a mocking smile and an insouciant swagger. In every possible way, Twisted Fate always has an ace up his sleeve. Twisted Fate is a Mage/DPS hybrid that can be built to deal burst AP damage or a mix of AD and AP DPS. Twisted Fate can “see” the whole map in demand and teleport instantly to almost anywhere in a massive range.

Here are Item Build Recommendations that works on this champion and which are the best build for Twisted Fate Wild Rift in this patch.

This is the standard build for Twisted Fate which focuses on making him a burst damage dealer.

This is the DPS build for Twisted Fate and it deals with a good amount of hybrid DPS. It is a viable build for the mid lane or the dragon lane and the main advantage of this build is that it deals both physical and magic damage and enemy tanks have to build both types of defense items to deal with you effectively.

Ensure your kills on ganks with Ignite. Use this if you are confident against your opponent in the mid lane.

Twisted Fate is an immobile champion so reserve your Flash for escaping.

Use Barrier is faced against oppressive laners or burst damage champions like Zed or Fizz.

2nd, Pick a Card, is leveled up at first to help with last hitting then 3rd, Stacked Deck, is picked up next you’ll be able to roll some gold on short trades early on. But 1st, Wild Cards, is maxed first for the burst damage. You can get Wild Cards at level two if you are being shoved too hard early on. Get a point in your ultimate whenever possible.

Gain 2 to 12 bonus gold upon killing a unit.

Second Cast: Channel for 1.5 seconds to teleport to target location. 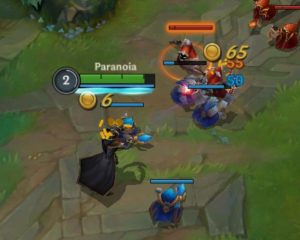 Twisted Fate earns extra gold from killing enemy units and by attacking champions while his 3rd, Stacked Deck is active.

Loaded Dice helps Twisted Fate gain a substantial gold lead and it reinforces Twisted Fate’s playstyle of winning his lane through other means instead of the traditional “kill your enemy laner.” 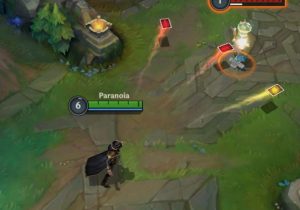 Wild Cards is Twisted Fate’s poke and main damaging ability. It is one of the longest range ability which damages in a straight line.

It does not disappear after the first hit unlike Jhin’s Deadly Flourish and the damage does not diminish after hitting multiple enemies, unlike Zed’s Razor Shuriken.

If you want to clear a minion wave fast, walk up to the wave and cast Wild Cards while the minions are walking in a straight line.

Wild Cards can only damage an enemy once. 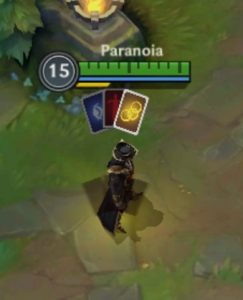 Activating Pick a Card will trigger the animation of three cards shuffling on top of Twisted Fate. Twisted Fate can choose which card he will utilize by recasting the ability. The cards enhance Twisted Fate’s attack and add a special effect depending on the color of the card he chooses.

The activation is an auto-attack reset but it is not a reliable one to use since you want to time your recast on the color you want to use.

The first card to appear is randomized but it always shuffles in the same order. Blue, Red, Gold. 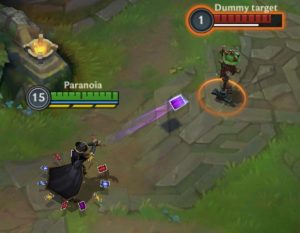 Optimize your burst damage by stacking your attacks before teleporting and before using 2nd, Pick a Card.

Combine with 2nd, Pick a Card, to deal more damage and land more attacks during the laning phase to maximize the gold that you can roll on your passive. Although, do not overextend just to land more hits because you have no escape mechanism and therefore very vulnerable to ganks. 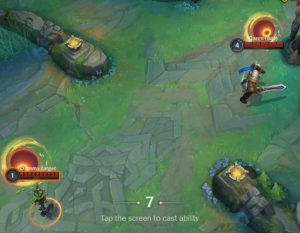 Destiny has two parts. The first cast reveals all enemy champions on the map. And the second cast allows Twisted Fate to teleport in the location of his choosing. The teleport has a near global range which occupies 90% of the map when he casts the ability in the mid lane. 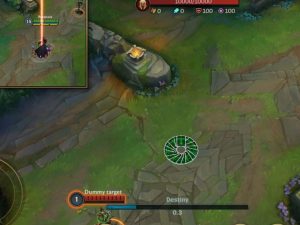 The best and maybe the easiest way to utilize Destiny is to teleport to the direction where a fleeing champion is heading to. Activate Pick a Card, choose the Gold Card. Appear, stun, attack, Q. Kill. The vision and teleport marker is visible to both allies and enemies so choose a teleport destination that is not too obvious to see to surprise enemies like in bushes. You can also teleport right on top of a recalling enemy and the recall animation will hide your teleport animation.

You can activate Pick a Card and choose your card while channeling Destiny.

Always communicate to your team if you want to set up a fight or a gank using Destiny and support your jungler as much as you can using your ultimate.

Time your first recall with your level 5 so you’ll dive back into action after your first buy and lose no last hits or head straight into a gank.

Twisted Fate is a gank-oriented hero and as such, he is not a champion who you’d expect to win your lane.

Do not get caught up in trying to win your lane because Twisted Fate is not equipped to do so unless you have a clear skill gap with your opponent.

With the help of your passive, Loaded Dice, you will be able to build your items faster than the enemy without killing them.

Twisted Fate has no defensive ability except for his Yellow Card. So, do not take an offensive position in your lane unless your jungler is helping you kill the enemy mid laner because if you get ganked, you are more than likely dead.

When looking for a lane to gank, especially when using your ultimate, Destiny, pick a lane which is:

In the late game, Twisted Fate plays a lot like a Marksman. He is a champion who is extremely vulnerable without help so do not stray far away from your team.

Always activate your ultimate, Destiny if the enemy team are missing because they may be taking Dragon or Baron or setting up a gank. A good activation of Destiny will allow your team to react accordingly.

Only use the teleportation part of Destiny to pick of an enemy if they are alone and you are sure that your allies can follow up on you. Because, unless you are extremely fed, if you fail to kill the enemy with a single combo, the enemy has a good chance to retaliate and get you killed instead.

Lee Sin provides immense map pressure with his ganks and having both him and Twisted Fate on one team will result in a crushing early game pressure for the enemy.

Olaf is one of the most oppressive jungler in the game. He loves to invade and gank and with your fast clear in the middle lane and ultimate, you are able to help him quickly when needed.

Zed loves preying on squishy, immobile champions and Twisted Fate is exactly that. You cannot pressure the lane enough to punish his weak early game and his level 5 power spike is just too much for you. Rush Stasis Enchant and hope for the best.

Orianna is currently one of the strongest mid lane champions. Forget about beating her in lane and she can clear faster than you which makes it harder for you to leave your lane to gank. If you gank frequently, expect your tower to go down fast. She’s way better than you in team fights. She can reach further than you and shield her teammates from getting bursted by you. Consider buying Rapid Firecannon earlier to stun her from long range.

Here are some pros and cons if you are playing with Twisted Fate in Wild Rift.

How good is Twisted Fate in Wild Rift?

Twisted Fate is a (Tier S) champion. He is a safe pick that works well in solo queue against most champions.

What role / lane should I play with Twisted Fate in Wild Rift?

Twisted Fate is usually picked in the middle lane as an AP carry. He can also be played as an off-meta On-Hit Marksman.

What abilities do I level up with Twisted Fate?

2nd, Pick a Card, is leveled up at first to help with last hitting then 3rd, Stacked Deck, is picked up next you you’ll be able to roll some gold on short trades early on. But 1st, Wild Cards, is maxed first for the burst damage.

What items should I build with Twisted Fate?

What Runes should I use when playing as Twisted Fate?

Electrocute adds additional damage on combos to burst down enemies. His other runes are Brutal, Spirit Walker, and Sweet Tooth.

Twisted Fate’s ultimate, Destiny, reveals all enemy champions in the map so its a great way to scout the enemy’s position. After activation, if an enemy is in a vulnerable position, teleport in a brush near team to finish them off.

Small Change in TF 2nd Ability, now the card rotation time will be 0.6s instead of 0.7s.