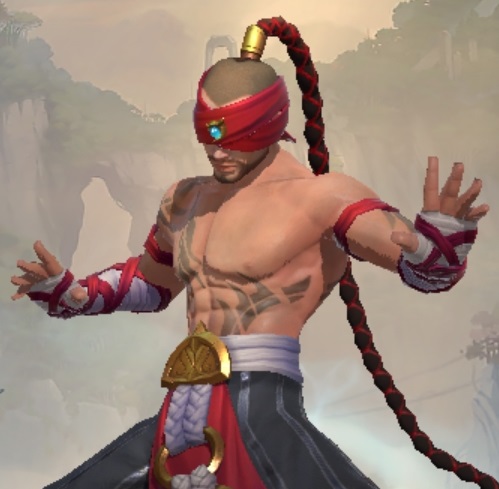 Best Lee Sin build guide for Season 4 Patch 2.6 In Wild Rift. With our Lee Sin guide you will learn which items to build, runes to select, skill order, and how to use Lee Sin abilities properly.

Lee Sin is a principled fighter who channels the essence of the dragon spirit to conjure his fabled burning fists and blazing roundhouse kicks. Lee Sin is a jungler who excels in early game duels. He is extremely strong during the early stages of the game and he uses that to snowball his team into victory.

Gains 50% Attack Speed for his next 2 attacks within 3 seconds. The first attack restores 20 energy and the second restores half of that amount.

Sonic Wave: Fires an energy wave that deals 60 physical damage (60 + 100% bonus AD) to enemies and reveals them. Hitting an enemy allows Resonating Strike to be cast within 3 seconds.

Safeguard: Dashes to target location. If an enemy is nearby on arrival, Lee Sin shields himself for 60 (60 + 100% AP) for 2 seconds. Allows Iron Will to be cast within 3 seconds.

Safeguard’s cooldown is reduced by 1 second with each attack.

Tempest: Deals 90 magic damage (90 + 100% bonus AD) to nearby enemies and reveals them. Hitting an enemy allows Cripple to be cast within 3 seconds.

Cripple: Slows enemies hit by Tempest by 30%, decaying over the course of 4 seconds.

Lee Sin gains bonus attack speed and has his next two attacks restore energy. Always attack once or ideally, twice, each time you use an ability. Both when killing jungle monsters or when fighting champions. 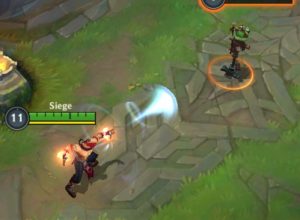 Lee Sin fires an energy wave in the target direction which damages the first enemy hit and marks them. Lee Sin can then recast Sonic Wave to perform Resonating Strike to the marked target which will make him dash to the target and deal damage which increases the lower the marked target’s health is. 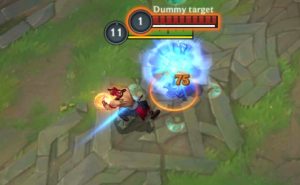 Sonic Wave is Lee Sin’s secondary gap closer. If possible, it is better used as a finisher because it deals more damage the lower the enemy’s HP is. Plus, you can and you should re-cast this ability once the enemy used Flash or their escape tool so you can stay on top of them.

You can use Sonic Wave as your primary engage. In fact, it has superior range, even compared to most champions. But make sure that you will land the ability because you lose half of your damage output if you fail to land this ability.

Think twice before re-casting Sonic Wave because you might land in a dangerous position. Just let the ability go into cooldown if you are unsure of the situation that awaits you on the marked champion.

Use Sonic Wave to move in between jungle camps to optimize your jungle pathing.

You can surprise an enemy behind a minion by casting Sonic Wave first then smiting the minion which is between you and your target Champion.

For the purpose of combo discussions later, the first cast of Sonic Wave will be called 1st1 and the second cast, 1st2 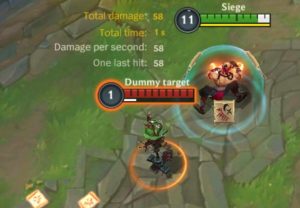 Safeguard is Lee Sin’s main mobility and defensive tool. The first cast of this ability allows you to dash to a target location and if there is a nearby enemy on his arrival, Lee Sin gains a shield.

The second cast is called Iron Will and it is an auto-attack reset that also grants bonus magic damage and a large amount of omni vamp for Lee Sin’s next two attacks. Always attack once before casting Iron Will again to execute a double attack.

Safeguard is best used as your main engage tool because it a safe and sure way to get close to your enemy.

You can bait enemy skills by dashing in using 1st2, Resonating Strike, then dashing out using Safeguard.

For the purpose of combo discussions later, the first cast of Safeguard will be called 2nd1 and the second cast, 2nd2 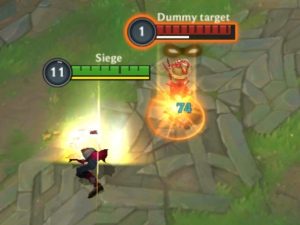 Tempest is an AoE magic damage ability that reveals enemies. Tempest can then be re-casted to Cripple enemies which will slow them.

Tempest is a great help in clearing jungle camps with multiple monsters like the Raptors, Wolves, and Krugs.

The reveal on Tempest is great when fighting against Akali and Vayne, which are currently the only two champions who can turn invisible on demand.

The slow of Cripple is great for setting up your 1st1, Sonic Wave. 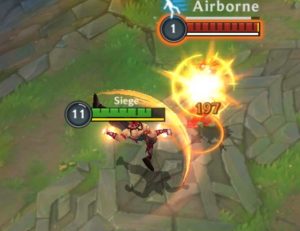 Dragon’s Rage is a heavy single-target nuke which knocks your main target away and also damage and knocks up all enemies who collide with the main target. You can sneak in an auto-attack during the animation of Dragon’s Rage.

Practicing the full burst combos will give you a good sense of all the other combos you can use.

This combo list is non-exhaustive and should be taken with a grain of salt. Practice in tutorial mode then AI first before playing PVP then Ranked mode because Lee Sin is a hard champion to master.

Here are Item Build Recommedations that works on Lee Sin

This is the standard build for Lee Sin which takes advantage of his early game damage to snowball the game for his team.

This item build grants you more HP which gives you more room to work with if you are facing a CC heavy team or your team lacks a frontliner.

Smite is a must for a jungler like Lee Sin. It grants you the Hunter License passive which increases your capability to kill jungle monsters in exchange of receiving reduced gold amounts from lane minions. The Smite active is useful for securing buffs and secondary objectives like Drakes, Rift Herald, and Baron Nashor. Upgrade into Chilling (Blue) Smite for the slow to secure kills in gank or upgrade into Challenging (Red) Smite if against an aggressive early game junglers like Xin Zhao, Vi, or Olaf.

Flash is a must on Lee Sin because there are just endless offensive options you can do with it and when worse comes to worst, you can always use Flash to escape.

1st, Sonic Wave, is maxed first because it has the highest possible damage output out of all of Lee Sin’s abilities. 2nd, Safeguard, is maxed next to reduce its cooldown and therefore increase Lee Sin’s Mobility and 3rd, Tempest, is maxed last because, in fights, you are using it for its slow and not its damage. Get a point in your ultimate whenever possible.

Lee Sin is an extremely strong ganker in the early game and mid game so you should take advantage of his ganking strength from the very start.

Ward the enemy’s blue buff to track their jungler’s movement then proceed to kill the red buff or the Raptors first if you think there is a chance of being invaded or interrupted in your jungle by Alistar or Blitzcrank. After reaching level 2, immediately look to gank the mid lane or the lane at your red buff side, whichever is easier to gank.

The lane easier to gank is usually the one that is:

It’s easy to caught up in Lee Sin’s ganking playstyle and forget about farm as it feels so easy and natural once you get the hang of it but remember that ganking is not a reliable source of gold so make it a habit to path through the jungle by killing jungle camps in between ganks.

In the later stages of the game, Lee Sin’s power falls of but one thing remains, his extreme objective control thanks to his ultimate, Dragon’s Rage.

When contesting Dragon or Baron, kick away the enemy’s jungler just before the objective’s HP gets into smiting level so that you’ll win the smiting contest without a problem.

Yes getting that perfect Insec play is satisfying as heck but nine times out of ten, it won’t be practically worth it. It is way better to use your Dragon’s Rage to peel for your ADC and combo someone to death while doing so.

Yasuo is an infamous partner of Lee Sin which either works extremely well or fails extremely hard. Lee Sin ganks hard so Yasuo can farm in peace so he can carry the load in the later stages of the game and their ultimates flow perfectly together as Dragon’s Rage can easily set up Yasuo’s Last Breathe.

Corki is a farming mid laner who benefits from Lee Sin’s early ganks and will pick up the team once Lee Sin starts to fall off.

Olaf hits harder and farms faster than Lee Sin at all stages of the game. It is mostly a skill match up but if Lee Sin loses even just one early game duel against this Viking, then he will most likely lose the game as well.

Gragas is one tough champion to beat as he has high amounts of damage and sustain all game, plus he has two crowd control abilities which can easily disrupt your gameplay. Do not enter before he reveals himself especially in the late game.

Vi has a fast clear time, just as fast as Lee Sin’s, and her ganks are equally deadly. Try to gank opposite of her as her knock-ups can disrupt you hard. If you can bait her ultimate then jump towards the turret, she’s dead meat. But if she catches you without your W, Safeguard, then you’re the one who’s most likely to die.

Here are some pros and cons if you are playing with Lee Sin in Wild Rift.

How good is Lee Sin in Wild Rift?

Lee Sin is a (Tier S+) champion. He is one of the best gankers in the game, he is strong in the early game, and his jungler clear speed is above average which makes him the favored champion in most matchups.

What role / lane should I play with Lee Sin in Wild Rift?

Lee Sin is a Jungler who is played as a ganker who is almost like an Assassin. In the late game, his play style transition more into a bruiser/peeler who enables his team to win in objectives and team fights.

What abilities do I level up with Lee Sin?

1st, Sonic Wave, is maxed first because it has the highest possible damage output out of all of Lee Sin’s abilities. 2nd, Safeguard, is maxed next to reduce its cooldown and therefore increase Lee Sin’s Mobility and 3rd, Tempest, is maxed last because in fights, you are using it for its slow and not its damage.

What items should I build with Lee Sin?

His core items are Umbral Glaive which has armor penetration which helps with his burst damage and it disables wards around him which turns into easier ganks. Trinity Force is Lee Sin’s next core item which grants all around stats and higher burst damage thanks to its Spellblade passive.

What Runes should I use when playing as Lee SIn?

Pick up Electrocute as Lee Sin wants to burst down his enemies fast and this Keystone Rune which gives bonus damage on combos helps with just that. Conqueror grants a more linear AD bonus and allows you to deal more damage in the long run which is especially useful if you are using the tank build. His other runes are Brutal, Hunter – Titan, and Pathfinder.

Any tips so I land my combos with Lee Sin better?

Lee Sin is a highly mechanical champion so there is no magical formula to become better than him than just to practice, practice, practice. Use the practice tool first then once you can execute combos flawlessly with him, apply it on bot matches, then pvps, and once you are are confident with him, use him on rank games over and over again until you master him.