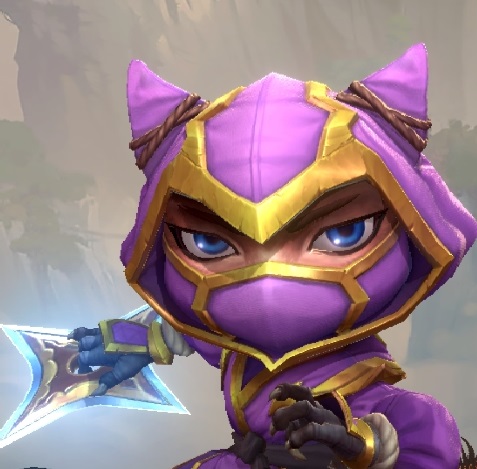 Kennen, the only yordle member of the Kinkou, is a lightning-quick enforcer of Ionan. He uses devastating electrical energy to strike down his foes. Kennen is an AP Baron lane bully with a strong laning phase and amazing team fighting presence. He can also be played in the middle lane as an AP carry or in the bot lane as an ADC.

Mark of the Storm

Hitting enemies with abilities places a Mark of the Storm on them for 6 seconds. At 3 stacks, the enemy is stunned for 1.25 seconds and Kennen gains 25 energy.

Stunning an enemy multiple times within 6 seconds reduces the stun duration to 0.5 seconds.

Transform into an electric ball for 2 seconds, becoming unable to attack but gaining 100% bonus Movement Speed and dealing 85 magic damage (85 + 80% AP) to enemies he passes through. The bonus Movement Speed is doubled during the first 0.5 seconds. Kennen gains 40% Attack Speed for 3 seconds upon exiting Lightning Rush.

Each subsequent bolt against the same target deals 10% increased damage.

Only applies 3 Marks of the Storm to a single target.

Innate Passive: Mark of the Storm 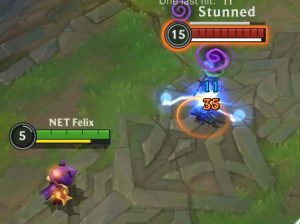 Hitting enemies with abilities places a Mark of the Storm on them for a short duration. Hitting the enemy with three abilities activates the mark to stun the enemies.

Kennen’s playstyle revolves around timing his abilities to activate his passive.

Part of Kennen’s destructive team fighting capabilities is being able to hit as many champions with his E, Lightning Rush and W, Electrical Surge together with his ultimate R, Slicing Maelstrom to maximize passive activation and damage.

Stunning an enemy again within 6 seconds reduces the stun duration to 0.5 seconds but do not underestimate the mini stun’s power to interrupt enemies. 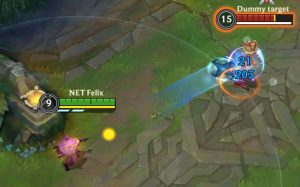 Thundering Shuriken is a long range poke with a short cooldown. It’s a skill shot which damages the first enemy it hits.

Use Thundering Shuriken to safely last hit minions from a distance. If you want to save up your empowered basic attack from your W, Electrical Surge, use this ability to last hit instead.

Thundering Shuriken is a pseudo-auto attack reset. It doesn’t really increase your attack speed but using it after a basic attack still increases your overall DPS. 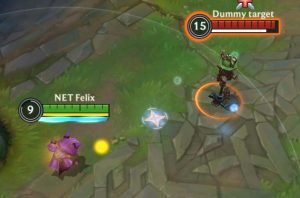 The passive portion of Electrical Surge is an empowered attack every 5th attack. It has a counter below Kennen’s energy bar which is exactly like Annie’s counter but for auto attacks. When the fifth attack is ready, the counter turns purple. This counter is also visible to your enemies.

If they do not respect your combo, stun them then proceed to repeat the process until the enemy is low enough for an all in which is about less than half their HP when you don’t have your ultimate yet. 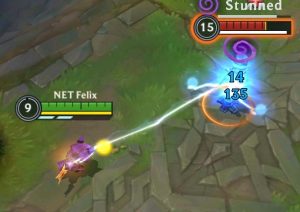 The active portion of Electrical Surge is an instant burst damage on all enemies around you who are marked with Mark of the Storm.

There is a thin line which circles around Kennen that represent the range of the active of Electrical Surge. It is slightly farther than Kennen’s auto attack and his ultimate.

When trying to kill a single enemy, activate it at the same time your Q, Thundering Shuriken lands for the burst damage.

In team fights, hit as many enemies with your ultimate, Slicing Maelstrom before activating Electrical Surge.

Electrical Surge is an instant cast. Surprise enemies with the quick stun. It also adds another Mark of the Storm. 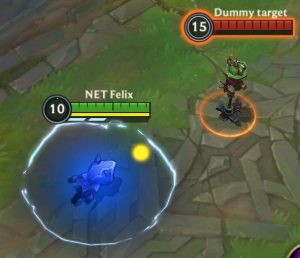 Lightning Rush is Kennen’s mobility ability. It turns him into a fast ball of lightning that damages all enemies he passes through and adds a Mark of the Storm.

After its duration or upon deactivation, Kennen gains bonus attack speed.

In the laning phase, avoid using Lightning Rush to harass enemies unless you are going in for the kill and if you know the position of the enemy’s jungler.

Lightning Rush is your only means of escape and you are vulnerable without it.

You’ll want to use Lightning Rush offensively when in team fights in combination with your ultimate,  Slicing Maelstrom. With the bonus Movement Speed, you’ll be able to stay on top of your enemies during your ultimate’s duration.

You should deactivate Lightning Rush early to finish off a low HP enemy you have already passed through using your auto attacks with the bonus attack speed. 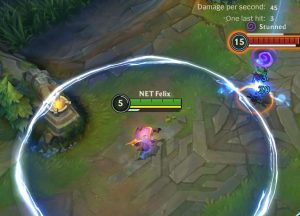 Kennen summons up a storm, gains bonus armor and magic resistance, and deals DPS which increases in damage over time.

It deals damage every 0.5 seconds and adds a Mark of the Storm for each instance of damage.

Slicing Maelstrom is a devastating team fighting ability that deals a lot of crowd control and damage, how much? By this much at max level:

Here are Item Build Recommedation that works on Kennen

This is the standard build for Kennen which grants him superior sustained damage and enough sustainability for himself.

This item build is for an ADC Kennen which is played in the Dragon lane. This build focuses on on-hit effects and increasing his attack speed to maximize his W, Electrical Surge damage.

Use Ignite if you absolutely know you are going to win your lane. It’s a good Summoner Spell to snowball but it loses its strength in the later stages of the game and its use doesn’t suit your mid and late game as you’ll focus on team fighting.

Barrier is your Summoner Spell if you are unsure about your laning phase if against a champion you know you’ll have a hard time against for example if you see in the loading screen that you are going to face a level 7 mastery Gragas. Barrier also allows you to go deep into the enemy team while using your Slicing Tempest and be relatively safe.

Flash allows you to surprise the enemy team with your ultimate and it can be used in a wide variety of offensive and defensive scenarios. So, why not?

Q, Thundering Shuriken is maxed first because it is a spammable ability which can be used to damage from afar and last hit minions. W, Electrical Surge is maxed next to increase your passive’s damage as well as its active which is a large part of your burst damage. E, Lightning Rush is obtained at level 2 so you’ll be safe from early ganks but it is maxed last because it only serves as a utility tool to escape or add another Mark of the Storm during your ultimate. The attack speed is just a bonus if you are playing as a mage but if you are playing as an ADC, max E, Lighting Rush second and max your Q, Tundering Shuriken last. Get a point in your ultimate whenever possible.

When playing as Kennen in the Baron lane. You’ll have an innate advantage against most Baron laners because you are a ranged champion. But keep in mind that Kennen has low base stats so if the enemy laner managed to get close to you, you’ll lose the trade so keep your distance using proper spacing and your E, Lighting Rush.

To harass the enemy while minimizing minion aggro (minions following and attacking you) attack the enemy champion once and walk back or into the bush before your attack hits the enemy. Repeat for maximum effect.

Use your Q, Thundering Shuriken to last hit minions safely and when you have your empowered attack from W, Electrical Surge available. Sitting on a fifth attack will increase your lane pressure and if the enemy don’t respect you and go inside your range, use your combo on them. You’ll quickly stun them if you land your Ws and Q so they won’t be able to fight back.

Never use your E, Lightning Rush to initiate unless you are sure of the enemy jungler’s position because you are vulnerable without it.

Get back before the first Drake appears so you can participate in the team fight there. You’ll be able to snag a kill or two with your ultimate, Slicing Maelstrom if used correctly.

In the late game, like the assassin that he is, Kennen works best if used as a team fight flanker.

The difference with the traditional assassin though, is that you’d want to flank to a full team fight.

The more you affect with your ultimate, Slicing Maelstrom, the better. Remember to use your other abilities in as many enemies as possible and target your Q, Thundering Shuriken on their squishies (Easily killable enemies).

Your enemies will be wary of your capabilities in the late game now more than ever and will try to kill you before you pop your ultimate on them so delay your appearance until they target another enemy. That is if you are not your team’s primary engage.

Stay on the bushes and go the long way to avoid wards and switch your Trinket Wards into Oracle Lenses so you’ll able to spot and deactivate their wards.

Amumu’s Curse of the Sad Mummy is an amazing large AoE initiation ability which stuns the enemy team so you can unleash the full blow of Slicing Maelstrom on them. His passive Cursed Touch turns a portion of your magic damage into true damage which turns you into a more devastating team fight monster. Malphite, Jarvan IV, and Shyvana also works well with Kennen because of the same logic but to a lesser extent.

Orianna‘s Command: Shockwave has amazing synergy and superior burst damage when combined with Slicing Maelstrom and Lightning Rush. She can further increase Kennen’s movement speed through her ability Command: Dissonance and shield him as he ravages the enemies with Command: Protect.

Lulu’s Wild Growth is another ability which has OP synergy with Kennen’s Slicing Maelstrom. Wild Growth will knock up enemies near Kennen and make enemies slower around him. She can also shield and speed him up.

Gragas can poke you down from a distance like you do. He can heal himself while you can’t. He can burst you down before level 5 while you cannot do that to him before having your ultimate. And his ultimate, Explosive Cask can mess up yours with a single press of a button. He will make your life hard throughout the game.

Janna can push you away with her ultimate, Monsoon which will render your ultimate useless.

Alistar can also push you away while your ultimate is active using his Headbutt.

Olaf can use Ragnarok and simply ignore your abilities while running you down to death.

Here are some pros and cons if you are playing with Kennen in Wild Rift.

How good is Kennen in Wild Rift?

Kennen is an A tier champion. He can do well against most Baron laner and he has amazing team fight presence. The only problem why he isn’t an S tier is that he is hard countered by a couple of S tier champion who are constant picks in the current meta.

What role / lane should I play with Kennen in Wild Rift?

Kennen is traditionally played in the Baron lane where he can bully most matchups but he can also be played in the middle lane and even in the Dragon lane as an ADC.

What abilities do I level up with Kennen?

What items should I build with Kennen?

Hextech Gunblade is the first core item for Kennen so he’ll have a way to sustain himself and its passive can slow enemies. Liandry’s Torment is bought next because of its %HP based damage that is devastating against tanks and on team fights. ADC Kennens usually buy Blade of the Ruined King first for the on-hit effect and lane sustainability.

What Runes should I use when playing as Kennen?

Conqueror is the Keystone Rune for Kennen whether as an AP carry  or AD carry because of his consistent DPS nature. His minor runes are Brutal, Hunter – Titan, and Hunter – Genius.

Any tips so I can land my Kennen's ultimate better?

To maximize the effect of your game breaking ultimate, Slicing Maelstrom, wait in the bushes and then flank from the side when both teams begin using their abilities on each other.