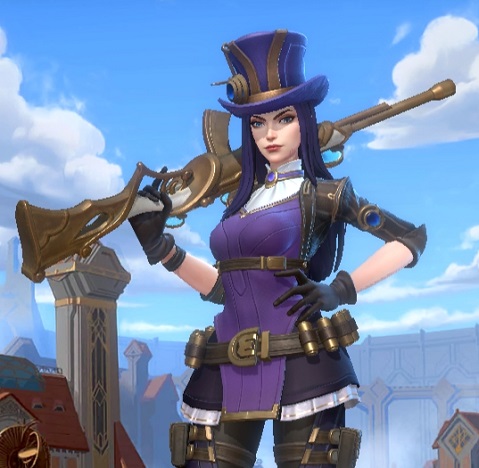 Best Caitlyn Wild Rift build guide for Season 7 Patch 4.0 of WR. With our Caitlyn guide you will learn which items to build, runes to select, skill order, who counters Caitlyn, and how to use abilities properly.

Here are Item Build Recommendations that works on this champion and which are the best build for Caitlyn Wild Rift in this patch.

The Sheriff of Piltover

This is the standard for Caitlyn Wild Rift Build. This build grants her consistent damage output as well as some burst damage in the form of crits and energized attacks. Plus, the extra range and slow from these items grants a lot of utility for the Sheriff of Piltover.

This is an alternative Caitlyn Wild Rift build that you use. With this, you are equipped with crit, attack damage, armor penetration from LDR if there’s any tank, and enough lifesteal so you can survive as you hit targets.

Runes for Caitlyn in Wild Rift

Listed below are the things that Caitlyn Wild Rift will need to win fights.

These two are the best spells you can equip for Caitlyn Wild Rift.

Heal is the superior summoner spell for ADCs if your support is not running it. It is better than Barrier because aside from the heal, it also gives a short burst of movement speed. Of course, if your support is running Heal, use Barrier or Exhaust instead.

Flash is a necessary summoner spell for Caitlyn because she is a fairly immobile ADC. Plus, you get to make awesome plays with it.

Caitlyn’s 1st ability, Piltover Peacemaker is maxed first because it is Caitlyn’s main source of poke damage in the landing phase, and a way to safely farm and shove minions in a losing lane. Next, put 1 point in her 3rd ability, 90 Caliber Net to have a disengage tool but max Caitlyn’s 2nd ability, Yordle Snap Trap next because it provides a lot of utility in teamfights. Of course, put a point in her ultimate whenever possible.

Every few basic attacks, or against a target she has trapped or netted, Caitlyn will fire a headshot dealing bonus damage that scales with her critical strike chance. On trapped or netted targets, Caitlyn’s Headshot attack range is doubled.

Caitlyn revs up her rifle for 1 second to unleash a penetrating shot that deals physical damage (deals less damage to subsequent targets).

Caitlyn sets a trap to find sneaky yordles. When sprung, the trap reveals and immobilizes the enemy champion for 1.5 seconds, granting Caitlyn an empowered Headshot.

Caitlyn fires a heavy net to slow her target. The recoil knocks Caitlyn back.

Ace in the Hole

Caitlyn takes time to line up the perfect shot, dealing massive damage to a single target at a huge range. Enemy champions can intercept the bullet for their ally. 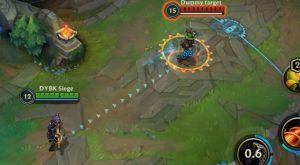 Headshot is an integral part of Caitlyn’s gameplay as it grants bonus damage to Caitlyn’s basic attacks.

It activates through two ways: 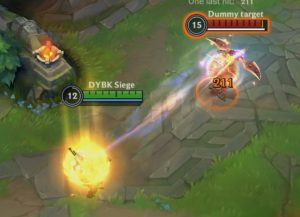 If you use Flash after casting Piltover Peacemaker, it will still cast in the same direction. Use this to create an illusion of hitting enemies from multiple direction or to create space while damaging enemies. 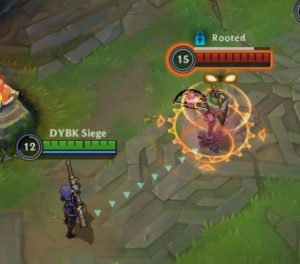 Yordle Snap Trap differs from other traps in the game because it is visible. Also, it cannot be destroyed and it does not activate on minions and monsters.

It is best to placed on chokepoints and brushes during the laning phase but on teamfights in the middle and late game, randomly place it around the battlefield to make it harder for enemies to move and if they mindlessly move around the fight, they will be rooted and you will gain bonus damage on the rooted targets.

Always place a Yordle Snap Trap behind enemies when your allies use their crowd controls on them. This crowd control chain combo is especially powerful when played together in the early game with aggressive supports like Blitzcrank, Leona, or Alistar. 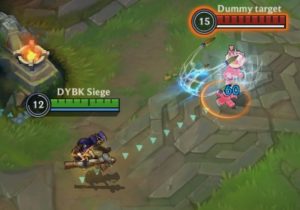 90 Caliber Net is Caitlyn’s self peeling and mobility tool. When cast, Caitlyn shoots a net that slows enemies and at the same time, Caitlyn is thrown backwards due to the recoil of the shot.

It activates headshot when it hits an enemy. It also works on minions and monsters hit by this abilities.

It can be a double-edged sword when used on low HP enemies because if the enemy survives the headshot, you will be farther away from them because of the recoil distance.

If you want to close distance on enemies, reverse the direction where you cast 90 Caliber Net so Caitlyn will recoil into the enemy you are chasing.

R | Ultimate: Ace in the Hole 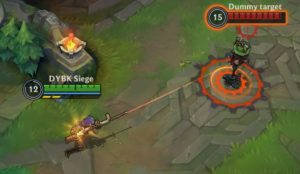 Ace in the Hole is a targeted ability that deals massive damage on low HP enemies after a short delay.

It has extremely long range and it homes in on enemies once shot but enemies can intercept the bullet by standing in front of your target.

It’s execute damage ranges from 40% HP when you are fed to around 30% against squishies if level and gold are equal and to 10-15% HP on tanks.

Caitlyn has a longer range than most ADCs so you have to take advantage of this by harassing them every time they try to last hit minions.

Make the most of Caitlyn’s passive, Headshot by staying under brushes so you will be able to stack it faster and deal bonus damage more often.

Of course, the enemy team will try to get the jump on you if you stay on the brushes. Secure your position using Caitlyn’s 2nd ability, Yordle Snap Trap.

Caitlyn’s traps may be visible to enemy champions but if you put them under brushes, it will make it harder for them to detect it and they will stay on their toes when trying to attempt a counterattack on you.

Caitlyn has fairly weak disengage so if you are against strong all-in duo combos like Lucian and Tresh or Tristana and Alistar, play on the safer side, especially if your Flash is on cooldown.

In the late game, positioning is key to winning with Caitlyn.

As for any classic sniper roles, you have to keep your position a secret until all hell breaks loose on team fights. Otherwise, you will be focused on by the enemy’s assassin or mages and you will fail to contribute to your team as a consequence.

Spam Caitlyn’s 2nd ability, Yordle Snap Trap on the battlefield, right in the middle and on your escape path just to be on the safer side.

We highly recommend using Caitlyn Wild Rift with the following champions as they synergize well with her.

Leona plays extremely well together with Caitlyn. She allows her to play extra aggressively in the early game and her stun chain is long enough to for Caitlyn’s trap to activate, extending the already long CC chain. Although, you have to pray that Leona won’t forget about you and peel for you in the late game.

Blitzcrank is another hyper aggressive early game support who can CC chain with Caitlyn. It is harder to chain Caitlyn’s trap with Blitzcrank’s combo though.

Alistar does not only play as aggressively as those two mentioned above but unlike them, Alistar is also an effective peeler and if its summoner knows it, you will have an easy time all game long.

In this section, we’ll tackle some of Caitlyn Wild Rift Counters.

Miss Fortune is hard to lane against when playing as Caitlyn. She’s impossible to harass because she is always behind her minions and she has a slow as well as a movement speed boost. Aside from that, positioning is a tough thing to do when against her because you will be punished by her Double Tap if you stay behind minions. It’s a game who can kill the enemy team faster against her in the middle to late game.

Vayne will win 1v1 against Caitlyn in almost all cases, even in the ones where you have a gold or exp lead. The good thing here is that she is significantly weaker than Caitlyn in the early game. But if you fail to create a huge lead in the early to mid game, you are sure to lose in the late game against her. Like with Draven, place traps around her to limit her movements.

Tristana has more burst damage than Caitlyn but it all boils down to executes their combos better.

Xayah has a shorter range than Caitlyn and you can easily avoid her Bladecaller by using Caitlyn’s 3rd ability, 90 Caliber Rifle.

Kai’Sa is another short ranged ADC that you can dominate in the early game. Dealing with her isn’t that hard in the late game, simply don’t get caught alone.

Here are some pros and cons if you are playing with Caitlyn in Wild Rift.

FAQ's About Caitlyn in Wild Rift

How good is Caitlyn in Wild Rift?

Caitlyn is a (Tier S) champion. Caitlyn is a safe ADC pick because she is reliable in terms of damage and utility throughout the game.

What role / lane should I play with Caitlyn in Wild Rift?

Caitlyn is played as an ADC in the Dragon lane. Her role in team fights is to deal damage from a distance and root enemies with her traps. She can also easily secure kills with her ultimate, Ace in the Hole.

What abilities do I level up with Caitlyn?

Caitlyn’s 1st ability, Piltover Peacemaker is maxed first because it is Caitlyn’s main source of poke damage in the landing phase, and a way to safely farm and shove minions in a losing lane. Next, put 1 point in her 3rd ability, 90 Caliber Net to have a disengage tool but max Caitlyn’s 2nd ability, Yordle Snap Trap next because it provides a lot of utility in teamfights.

What items should I build with Caitlyn?

Caitlyn’s first core item is either Infinity Edge or Youmuu’s Ghostblade, both of which gives Caitlyn a big early game advantage. Afterwards, make sure to get Rapid Firecannon for the bonus range which is fitting for Caitlyn’s sniper persona.

What Runes should I use when playing as Caitlyn?

Fleet Footwork aids Caitlyn through sustain and movement speed bonus. But if you want more damage, use Conqueror instead. Her other runes are Brutal, Bone Plating, and Sweet Tooth.

How do I maximize Caitlyn's 2nd ability, Yordle Snap Trap?