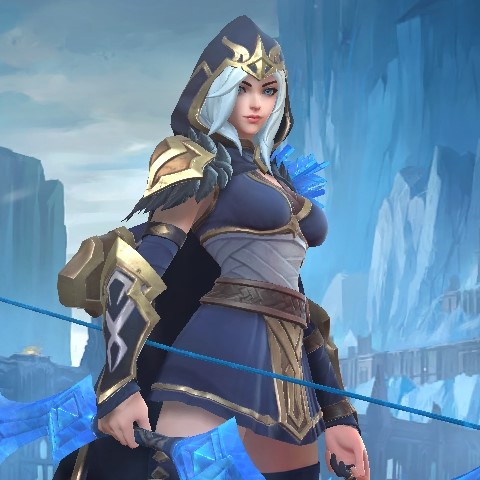 Best Ashe Wild Rift build guide for Season 7 Patch 4.0 of WR. With our Ashe guide you will learn which items to build, runes to select, skill order, who counters Ashe, and how to use abilities properly.

Stoic, intelligent, and idealistic, yet uncomfortable with her role as leader, she taps into the ancestral magics of her lineage to wield a bow of True Ice. Ashe is your go-to marksman for beginners because of her easy to understand kit and long range which translates into a great late game. Even if most of Ashe’s strength blooms in the late game, she also provides great map wide utility through all stages of the game.

Here are Item Build Recommendations that works on this champion and which are the best build for Ashe Wild Rift in this patch.

This is the standard build for Ashe which grants her all the stats she needs in a balanced manner. This build allows works well against all kinds of team compositions and all kinds of builds.

Runes for Ashe in Wild Rift

The Heal summoner spell helps a lot in the laning phase because it will heal both you and your support plus it grants a movement speed bonus which makes it a good outplay tool throughout the game. Be careful against those with Ignite, though.

Ashe is an immobile champion so she needs Flash in order to escape dangerous situations fast.

2nd, Volley, is the first ability we will max because it is a good harassing tool and helps with clearing minion waves. Then 1st, Ranger’s Focus, is maxed next to increase your DPS from the mid game onwards. 3rd, Hawkshot, is maxed last because it does not scale well and the utility it provides at its first level is more than enough. Get a point in your ultimate whenever possible.

Ashe’s critical strikes do not deal extra damage. Instead, they increase Frost Shot’s slow to 30%, decaying over time.

Passive: Store 2 Focus while Ranger’s Focus is not active. Attacks grant an additional stack of Focus (up to 6). Stacks fall off one at a time.

Active: For the next 6 seconds, attack consume a stack of Focus to fire with +25% Attack Speed and barrage the target with a flurry of arrows for 115% damage.

Enemies block multiple arrows, but the damage once.

Fires a hawk spirit that can travel infinitely far and briefly reveals units it flies over.

Re-cast: Explodes the hawk, granting vision of the area around it for 5 seconds. Units caught in the initial explosion are revealed for 3 seconds.

Launches a crystal arrow of ice that stuns the first champion hit and deals 200 magic damage (200 + 100% AP). The stun lasts between 1.5 to 3.5 seconds, increasing with the distance of the arrow’s flight.

Re-cast: Hold and drag to steer the arrow’s flight path. The arrow can only deviate from its original launch angle by a fixed amount. Tap the cancel button to stop steering.

Ashe can still move while the arrow’s flight path is being controlled but will automatically stop steering if she is struck with cast impairing crowd control effects. 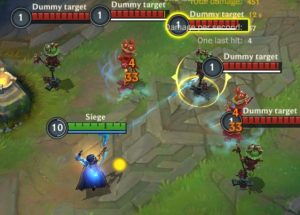 Critical chance and critical damage influence the strength of the bonus damage she deals on slowed targets. It works this way:

Ashe’s damage output is more simple and linear and reliable.

The slow effect scales based on level and critical attacks make it deliver twice the slow amount.

The damage bonus takes effect only on champions slowed by Ashe herself.

All the effects that Frost Shot grants can be applied to the extra attacks that Runaan’s Hurricane provides. 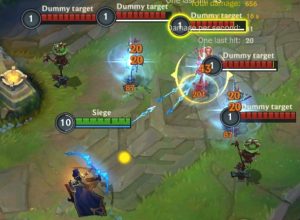 Ranger’s Focus increases Ashe’s attack speed and attack damage which makes it a double steroid that is scary effective at increasing her DPS. The catch here is that she needs to build stacks first that is consumed with each attack while the ability is active.

Ranger’s Focus is also an auto-attack reset. You should practice doing the AA + 1st + AA combo consistently to maximize and optimize your damage output on Ashe. 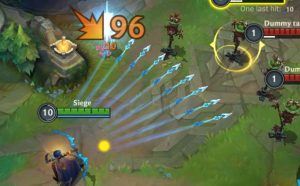 Volley makes Ashe simultaneously launch multiple arrows in a cone area. The arrows deal physical damage and slow enemies by the crit amount or double of her normal slow effect.

Volley is a great harassment tool because it has a wide area of effect and fast projectile speed. It is almost impossible to dodge it unless the enemy is hiding behind a minion.

Each arrow can only hit one target and multiple arrows can hit a target but can only be damaged once. Because of this, large champions like Gragas or Shyvana in her Dragon form can protect their allies from being slowed but be damaged only once.

A minion, even though they are small, can block multiple arrows if they are close enough. But, a minion or enemy that is going to die to a Volley arrow will only receive one arrow if Volley is their cause of death. Use this to surprise enemies in the laning phase.

Always start your trades with Volley so that your first auto-attack will immediately deal bonus damage. 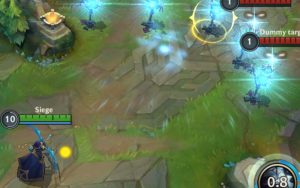 Hawkshot shoots a projectile that reveals the area that it travels for a short while. It can then be reactivated to provide vision to an area for a slightly longer duration and reveal all units where the reactivation happens.

Hawkshot is also a great way to check bushes so your team doesn’t have to “facecheck” or check the bushes themselves and put them in danger. Plus, enemies will try to outplay you and your team using the bushes and this ability completely negates that style of juking.

Another important thing to note is that Hawkshot reveals invisible champions like Akali in her Twilight Shroud or Teemo when he activates his Guerilla Warfare.

There are different ways to utilize this ability to its fullest. I recommend looking for videos and practice it in the practice tool. Here are some suggestions: 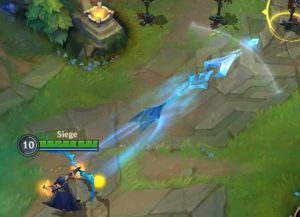 Enchanted Crystal Arrow shoots out a giant arrow that has a global range and deals AoE magic damage and stuns the first champion it hit. It has a pretty slow speed but its stun increases the farther the arrow travels. A cool feature of Ashe’s ultimate is that the arrow can be controlled by holding onto the skill button.

Enchanted Crystal Arrow turns Ashe into a global threat as her ultimate enables her to initiate or to follow up on fights.

Yes, landing your ultimate across the map is extremely satisfying but it is equally useful to use it in short range bouts as an initiation tool, follow-up CC, or even as a finisher.

You can Flash while casting Enchanted Crystal Arrow and the direction of the arrow will not be affected which is useful for escaping or avoid skill shots.

If you are planning to control your ultimate, cast it under your tower or under a bush because you might lose track of your champion and be vulnerable to ganks.

Ashe has a relatively weak early game, especially when faced against pick-off comps with Blitzcrank or Lee Sin or against all-in comps like Alistar when paired with Tristana. But she does okay against farming champions and poke comps because she has a relatively long auto attack range and a long range poke with her 2nd, Volley.

Play it safe. farm, and punish enemies who overextend using your 2nd, Volley and auto-attacks.

Spam your 3rd, Hawkshot on the enemy’s jungle to track the movement of their jungler.

Once you reach level 5, go behind your turret and check other lanes if there is a lane you can help with your ultimate.

Ashe’s damage exponentially increases in the mid to late game once she has her items. The only issue you have to be careful now is her lack of mobility be careful and do not let yourself get caught alone because Ashe is extremely fragile when enemies get close to her.

Always check objectives using your 3rd, Hawkshot to see if the enemy is trying to take Baron Nashor.

Spam your 2nd, Volley on enemies trying to get close to your team to deny their initiation or make them vulnerable to attacks thanks to your slow.

Do not hesitate to use your ultimate in short range fights as it inflicts a long duration stun which will most likely translate into a kill.

And remember to activate your 1st, Ranger’s Focus every time you reach 5-6 stacks.

Seraphine provides great lane pressure and sustain at the same time. Plus, her 3rd, Beat Drop, roots enemies who are already slowed. Since Ashe constantly slows her enemies, Seraphine can then consistently root or stun (if echoed) enemies.

Braum is one of the most reliable peeler and the game. They have both slows and hard disables. Together, they can slow and freeze enemies all game long.

Jinx can fight out a ranged battle against Ashe and win because of the bonus range from her Rocket Launcher and once Jinx “Gets Excited” she can easily out-DPS Ashe.

Alistar is a tough matchup to Ashe because he can easily tank her damage and once he uses her combo on her, she’ll have a hard time surviving especially if Alistar is paired with someone with strong all-ins like Tristana.

Here are some pros and cons if you are playing with Ashe in Wild Rift.

FAQ's About Ashe in Wild Rift

How good is Ashe in Wild Rift?

Ashe is currently a (Tier A+) champion. She can still work if you one trick her but she is only efficient as counters to certain lineups.

What role / lane should I play with Ashe in Wild Rift?

Ashe is played as the ADC in the Dragon lane. She can also be played as an off meta support.

What abilities do I level up with Ashe?

Her 2nd, Volley is maxed first as it is a reliable way to poke down enemies then 1st, Ranger’s Focus is maxed to increase her DPS and 3rd, Hawkshot is maxed last.

What items should I build with Ashe?

What Runes should I use when playing as Ashe?

Conqueror increases your damage with each attack. It maxes out at five stacks and grants even more bonus damage which times almost perfectly with the activation window for Ranger’s Focus. Her other runes are Weakness, Loyalty, and Sweet Tooth.

Any tips so I can aim my Ashe's ultimate better?

Look at the state of your target first if they are trying to fight or runing away so you can predict their movement. Hold your ultimate’s button to steer your ultimate for a better chance to hit the enemy.