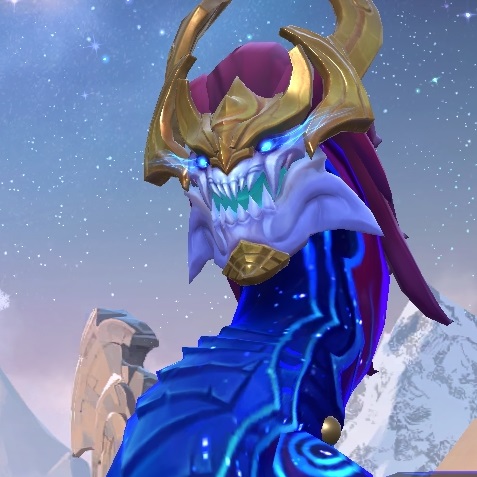 Best Aurelion Sol Wild Rift build guide for Season 7 Patch 4.0 of WR. With our Aurelion Sol guide you will learn which items to build, runes to select, skill order, who counters Aurelion Sol, and how to use abilities properly.

Aurelion Sol once graced the vast emptiness of the cosmos with celestial wonders of his own devising. Aurelion Sol is a roaming mid laner who can quickly clear his lane then effectively roam and gank other lanes and create extreme map pressure for his team.

Here are Item Build Recommendations that works on this champion and which are the best build for Aurelion Sol Wild Rift in this patch.

This is the standard build for Aurelion Sol which is a balance of survivability and utility because Aurelion Sol wants to deal consistent DPS with his stars.

This item build works well in three conditions: Your team has enough crowd control, you have an effective peeler, and the enemy team has no high HP champions. The first two conditions are fulfilled if you have Alistar, Malphite, or Braum in your team. This build increases your CDR to the max and grants you high burst damage which contrast the first build’s DPS and utility function.

Ignite increases your chances of killing the enemy especially when ganking the bot lane which almost always carry a heal summoner spell.

Flash is necessary for Aurelion Sol because he has no natural disengage abilities.

2nd, Celestial Expansion is maxed first as it is your main source of damage and lane clear. 1st, Starsurge is maxed next to scale it for the mid game and max 3rd, Comet of Legend last as it provides enough utility as level 1. Get a point in your ultimate whenever possible.

Center of the Universe

Fires a newborn star that detonates upon reaching the Outer Limit. The star expands as it travels, dealing 65 magic damage (65 +65% AP) and stunning for 0.4 to 1.6 seconds based on time traveled.

Starsurge can be re-cast to detonate the star early.

When the stars retract, Aurelion Sol gains 40% Movement Speed that decays over 2 seconds.

Passive: Gradually gains Movement Speed while moving in the same direction, up to 40%.

Active: Takes flight, gaining the ability to see and travel over walls for 9 seconds.
Taking damage from Champions will end the flight.

Innate: Center of the Universe 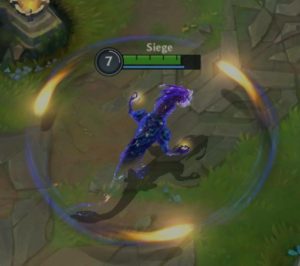 Aurelion Sol has three small orbiting stars around him at all times. These stars are central to how Aurelion Sol is played as it constantly deal magic damage to those it hits and applies item effects.

Aurelion Sol is bad at hiding because the orbiting stars can still be seen by your enemies even when you are under bushes.

An important concept in Center of the Universe is the “Outer Limit” which is the maximum distance the stars travel when you activate your 2nd, Celestial Expansion. The Outer Limit plays a crucial role in the behavior of all your abilities.

It is important to learn how to move in a way that increases the hit rate of your stars. The stars move counterclockwise, so you’ll have to move clockwise to manually increase its hit rate. 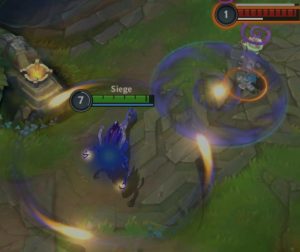 Aurelion Sol summons a newborn star that damages and stuns the enemy when it reaches the Outer Limit or when detonated early. The duration of the stun and size of the star increases based on the distance the star has traveled.

The size of the star can reach extreme proportions when traveling long distances thanks to Aurelion Sol’s 3rd, Comet of Legend. 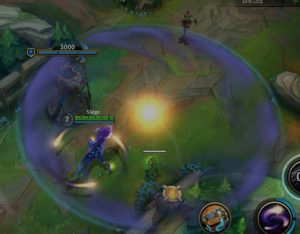 Aurelion Sol can do a 1st + Flash combo in opposite directions for a doubly safe escape mechanism. 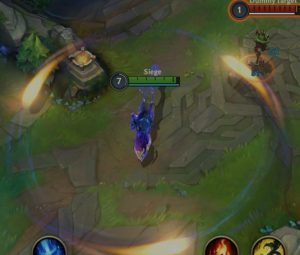 The stars are pushed to the Outer Limit when Celestial Expansion is cast. The stars also orbit faster and deal more damage this way.

The damage of your passive also increases as you level this ability up.

You can re-cast Celestial Expansion earlier to retract the stars and increase your movement speed which can help in various situations where one is to basically run away.

Celestial Expansion is your main source of damage and pressure throughout the game. If you want to gank in the early game. You’ll be able to quickly clear the lane with one cast of this ability by positioning yourself on the side of the minions. Be sure to have a ward placed on that side and that you are aware of where the enemy’s jungler is because you’ll be overextending yourself to do this. 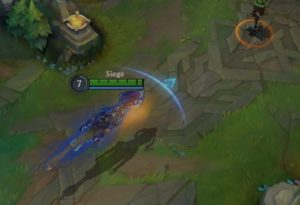 Aurelion Sol retracts his stars and travels towards a direction with increased movement speed while being able to travel through walls and other obstacles.

You’ll gain sight over walls while flying over them but you will also be seen by the enemy team faster than usual. Be sure to set up ganks with your 1st, Starsurge, together with this ability as you’ll be able to make overwhelmingly large discs over large distances.

You are able to cross about half the map even with just one level of this ability. 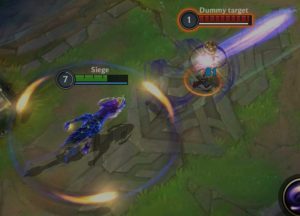 Aurelion Sol exhales Starfire in a line which deals magic damage and slows enemies. Enemies who are close to Aurelion Sol are knocked back to the Outer Limit.

Voice of Light has a relatively long-range so you can use it to initiate fights and the slow will usually be enough to catch up to your target. It can also be used to snipe down low HP champions.

You can do an “Insec” type play which is knocking back the enemy into your team by using Ult  + Flash. You’ll be putting yourself in a vulnerable position by doing this, though.

Aurelion Sol’s playstyle revolves around clearing out the lane fast then ganking the side lanes.

So, clear your lanes with your 2nd, Celestial Expansion and save your 1st, Starsurge and 3rd, Comet of Legend for your ganks unless you are winning heavily in your lane.

However, do not force to win your lane because it is not how Aurelion Sol is designed. It is better to focus on ganking your side lanes because you can begin ganking regularly as early as level three. Every time your 3rd, Comet of Legend is available, look for a lane to gank.

It is best to gank lanes are overextended so you’ll have a better chance of landing your 1st, Starsurge on your enemy.

Recalling before setting up your ganks are a good trick to catch enemies off guard because they’ll think that you went back to get your items and will go back to your own lane instead of ganking.

In the late game, do not join your teammates if they are grouping up. Shove the next lane where your team is ganking. For example, if they are in top, go mid and if they are in mid, you can stay at top or bottom. It is ideal that you shove a lane that is pushed into your side of the map because you don’t want to be picked off and killed alone which will happen if you overextend.

Positioning yourself far from your teammates will allow you to create a large 1st, Starsurge which will force enemies to either disengage and scatter or suffer your stun.

After your 1st, Starsurge + 3rd, Comet of Legend entrance. Keep damaging enemies using your 2nd, Celestial Expansion. Stay with your team and do not overextend because as time passes by, the more you’ll be susceptible to being one-shotted by enemy champions.

Master Yi requires a lot of farm and that makes his team’s early game a little harder because of the lack of ganks. Aurelion Sol takes care of that void because he is an amazing ganker from the get go.

Shyvana is a farming jungler whose focus is securing Drakes so she can have a strong mid to late game. She is not strong without her ultimate, Dragon’s Descent so her ganks will be scarce. Aurelion Sol will take care of the ganks while Shyvana is focused on her farming.

Fizz’s kit just simply makes Aurelion Sol’s life hard all game long. Aurelion simply doesn’t have enough damage or pressure in the early game to hinder Fizz and his Playful/Trickster is a hard counter to all your skills plus he can simply dash into inside your stars, which makes it close to impossible to deal with this annoying fish.

Katarina is another mobile assassin who can simply outmaneuver and outgank Aurelion Sol. When facing her, it will boil down who executes better ganks and who kills more in the early game, will most likely snowball to victory. Do not fight Katarina head-on as she can dodge your 2nd, Celestial Expansion and burst you down.

Here are some pros and cons if you are playing with Aurelion Sol in Wild Rift.

How good is Aurelion Sol in Wild Rift?

Aurelion Sol is a (Tier A+) champion. He is a niche pick who can work well with a player who knows how to time his ganks. Due to the nature of his kit, he is not a beginner-friendly champion. But he can still be a solid pick which can be used to climb rank in all elos.

What role / lane should I play with Aurelion Sol in Wild Rift?

Aurelion Sol is played in the mid lane as the AP carry Battle Mage who focuses on ganking in order to assist his teammates in the side lanes.

What abilities do I level up with Aurelion Sol?

2nd, Celestial Expansion is maxed first as its your main source of damage and lane clear. 1st, Starsurge is maxed next to scale it for the mid game and max 3rd, Comet of Legend last as it provides enough utility as level 1.

What items should I build with Aurelion Sol?

Aurelion Sol’s core item is Rod of Ages because he is a Battle Mage who fights in the midst of the battle. Rod of Ages grants him a good amount of HP, Mana, and AP which increases further over time. Afterwards, he buys Liandry’s Torment and Rylai’s Scepter.

What Runes should I use when playing as Aurelion Sol?

Electrocute grants additional damage on combos. Do not forget to auto attack between abilities to make sure that Electrocute will proc. His other runes are Brutal, Spirit Walker, and Sweet Tooth.

Any tips for ganking with Aurelion Sol?

Always make sure to gank with his 1st, Starsurge + 3rd, Comet of Legend combo. Decide where you will gank before hand and align yourself to where you’d think they will be positioned once you arrive. It is best to gank overextended lanes and lanes with both allies and enemies are low or at least half in HP.