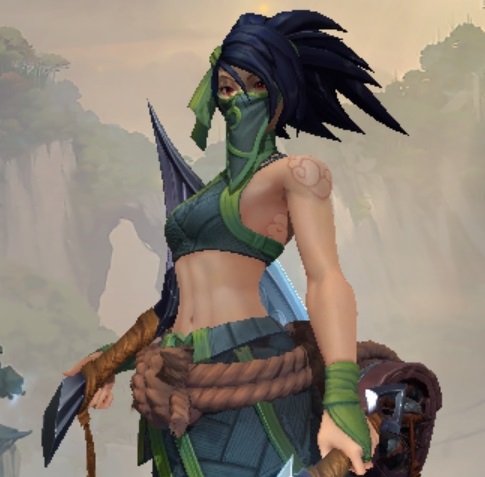 Best Akali Wild Rift build guide for Season 7 Patch 4.0 of WR. With our Akali guide you will learn which items to build, runes to select, skill order, who counters Akali, and how to use abilities properly.

Akali strikes in silence, with a message loud and clear: fear the assassin with no master. Akali is a mobile burst damage assassin who is great at killing a champion fast and doing extended 1v1 trades. She has a lot of mobility abilities which makes her great at killing enemies one by one by going in and out of sight.

Here are Item Build Recommendations that works on this champion and which are the best build for Akali Wild Rift in this patch.

This is the standard build of Akali which focuses on increasing her burst damage as much as possible.

This item build is good for fast-paced games with drawn-out team fights.

Runes for Akali in Wild Rift

Ignite helps you secure kills throughout the game. Its Grievous Wounds effect is also very useful against high sustain champions.

1st, Five Point Strike, is the first ability to be maxed because it is your main source of damage and method to activate your passive. 3rd, Shuriken Toss, is next to scale its cooldown then 2nd, Twilight Shroud, is maxed last because it does not scale that well with its additional levels. Get a point in your ultimate whenever possible.

Dealing active ability damage to a champion reveals a ring for 4 seconds.

Creates a smoke cloud that expands over 5.5 seconds and restores 100 energy. Akali is invisible and gains 30% Movement Speed inside the shroud.

Attacking breaks the invisibility for 0.8 seconds. 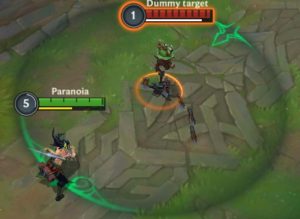 Activating Assassin’s mark and utilizing it consistently is one of the biggest differences between a good Akali player and a newbie.

Remember to auto-attack between casting abilities to utilize your passive. It is often better to move out then in the ring to activate your passive instead of simply auto-attacking. 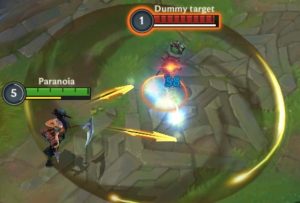 Five Point Mark is a spammable poke ability that you are going to use to last hit, harass enemies, and activate your passive with. It deals magic damage and slows down enemies hit by it at its maximum range.

You can instantly activate your passive using Five Point Mark if you hit the enemy champion with the very edge of this ability just like in the picture above.

Five Point Mark is an essential part of Akali’s combos because you can activate it during the animation of both casts of 3rd, Shuriken Flip. 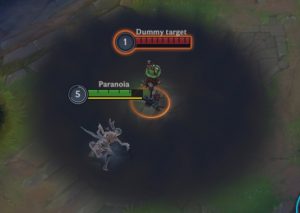 Twilight Shroud is Akali’s main outplay tool and it is the main thing that allows her to move around in the thicket of a team fight in which she is otherwise vulnerable.

Akali immediately gains energy then she becomes invisible inside the cloud and she gains bonus movement speed. The cloud expands as a ring over its duration.

Never cast it at the start of a team fight unless you are targeted by a strong ability or crowd control such as Fizz’s Chum of the Waters or Vi’s Assault and Battery. 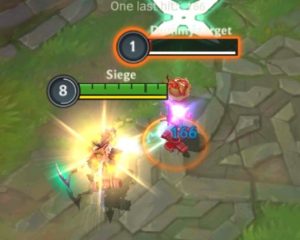 Shuriken Flip is Akali’s main mobility tool. This ability can be cast twice. In the first cast, Akali throws a shuriken forward while she does a backflip at the same time. The shuriken marks the first enemy it hits and when Shuriken Flip re-casted, Akali dashes to the marked target.

The first cast of Shuriken Flip is a double-edged sword because if you are going for a kill but miss the first cast, you will be too far away from your target and your prey will most likely survive your assassination attempt.

If you are not confident about landing this ability and you are too far away, you can cast it backwards so you will do the flip towards the enemy and you can proceed to either use 1st, Five Point Strike, or Ult, Perfect Execution to engage on the enemy. Bonus: If you do this and land the shuriken into a minion or jungle monster, you can re-cast this ability to get back to safety after killing or damaging the enemy with your combo.

You can follow a teleporting enemy using this ability. The second cast of Shuriken Flip can be used even if the enemy is a whole map away.

You can use 1st, Five Point Strike, during the animation of both casts of Shuriken Flip.

Shuriken Flip is a good way to deal damage using your passive.

Think twice about the position of the marked enemy because you might land in a dangerous position and be killed instead. If you are unsure, simply let the ability go on cooldown instead. 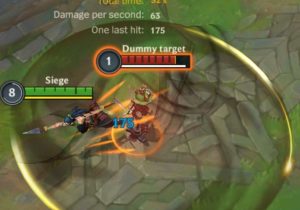 Perfect Execution is a two-part dash execution ability. The first cast is a magic damage targeted dash ability. You can only use the ability by targeting an enemy champion but will still damage all enemies you pass through with it.

The first part of Perfect Execution will land you behind the original position of your target and it will always activate your passive unless the enemy is pressed against a wall.

The second part of the ability is a magical damage execution dash ability. You can use the second part of Perfect Execution by targeting a selected area. It will damage all enemies it will pass through. The damage that you will deal can increase up to three times the normal amount based on the enemy’s missing health.

You can use the ability to escape, but it is a waste because of its long cooldown.

A great thing about Akali is that she doesn’t have a mana pool. She has an energy bar that refills quickly.

This means that you have used and abuse your 1st, Five Point Strike to harass the enemy or simply last hit minions.

If you hit your enemy with your 1st, Five Point Strike. Try to hit the enemy with your passive, Assassin’s Mark. If that is not possible, use it to last hit. You can force an engagement using your 2nd, Twilight Shroud and 3rd, Shuriken Toss.

Pre-level 5, activate your 2nd, Twilight Shroud after hitting the enemy with a combo with your 3rd, Shuriken Toss. If you manage to hit the enemy with another 1st, Five Point Strike and auto-attack after that, you might be able to kill the enemy.

Once you hit level 5, you’ll be able to kill most champions with your full combo + Ignite.

Look for a kill every time your ultimate is available. Mid game is where Akali shines the most.

After the mid game, you should have accumulated a lot of kills already.

Late game is a hard stage for Akali as the enemy team would almost always be grouped together.

Try to look for champions farming alone or split pushing.

Your target is the enemy ADC or APC.

Once a clash breaks out, wait for the enemy team to use their crowd control. Once they have burned their abilities, it will be your time to shine once more.

Dr. Mundo is an excellent jungle partner for Akali because he’s a great peeler and space creator for his team. He can soak a lot of damage and create chaos on team fights which is a good environment for Akali which she can take advantage to assassinate enemies from the shadows.

A team does not want to stay together if they are against Kennen and they don’t want to be spotted alone when facing Akali. If both are in the same team, they have to pick their poison carefully.

Lux can punish Akali hard before she has her ultimate, and if the lux player is good, she’ll get Barrier against Akali and she won’t be able to kill her using a full combo by then. As the game goes on, Lux can prevent Akali from bursting down her targets because Lux’s Prismatic Shield grants high amounts of shielding to her allies.

Lulu’s ultimate, Wild Growth and Help, Pix! will make it hard for you to burst down your enemies if she’s around. Her 2nd, Whimsy can easily turn you into a critter and then killed if you try to dive them.

Lee Sin can reveal you in your shroud through his 3rd, Tempest. His ultimate can break your combo and he can chain you to death if you are not careful.

Here are some pros and cons if you are playing with Akali in Wild Rift.

FAQ's About Akali in Wild Rift

How good is Akali in Wild Rift?

Akali is a (Tier S) champion. She will dominate in most matchups and can carry her team on her back if the summoner using her is skilled enough to do so. She is a little hard to master but she is definitely worth the time.

What role / lane should I play with Akali in Wild Rift?

Akali is traditionally played in the Baron lane but she can also be played as a mid laner.

What abilities do I level up with Akali?

Her 1st, Five Point Strike is her main source of damage so it’s maxed first followed by her 3rd, Shuriken Strike and 2nd, Twilight Shroud.

What items should I build with Akali?

Hextech Gunblade is Akali’s main item. After that, she builds either Infinity Orb or Liandry’s Torment.

What Runes should I use when playing as Akali?

Akali usually builds Electrocute for the additional damage when doing combos but she is also a viable Conqueror wielder if the enemy team has lots of tank champions. Her other runes are Brutal, Hunter – Titan, and Hunter – Genius.

What are tips for doing combos with Akali?

Practice, practice, practice. Always try to hit enemy with an auto attack with an Assassin’s Mark as it is a great source of damage in her combos. Learn how to aim her 3rd, Shuriken Strike and know its various uses as well.