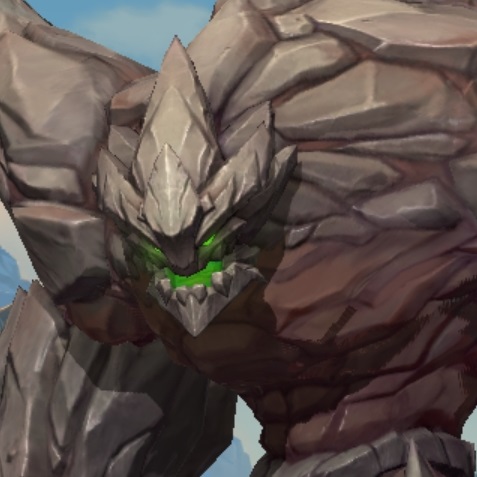 Best Malphite Wild Rift build guide for Season 7 Patch 4.0 of WR. With our Malphite guide you will learn which items to build, runes to select, skill order, who counters Malphite, and how to use abilities properly.

Malphite is a massive living stone with tremendous elemental strength. Malphite is a tank champion with one of the strongest initiation ultimate in Unstoppable Force. He is a popular pick because of his strong team fighting and his unshakable defenses against physical damage.

Here are Item Build Recommendations that works on this champion and which are the best build for Malphite Wild Rift in this patch.

This is the standard build on Malphite which focuses on increasing his armor stat which is his biggest defensive strength. If facing an AP heavy team, some changes should be made because Malphite is not naturally as strong against AP champions.

This item build is excellent when playing as a mid-lane Malphite AP carry. This item build will make you deal extreme amounts of damage against the enemy team in a short while.

Runes for Malphite in Wild Rift

Ignite will allow you to finish off enemies who survive your combo because Malphite lacks mobility after using his ultimate.

Flash grants Malphite additional offensive and defensive options. Remember that Flash cannot buffer Unstoppable Force so if you want to do a long-range set-up, do the Flash first because casting your ultimate.

Malphite passively gains a shield based on his max HP after a short while away from battle.

Take advantage of his passive by waiting for the shield to return before engaging in a trade against. Repeat over the course of the early game to gain an HP advantage over the enemy before reaching level 5 so you’ll have a big advantage once you have an ultimate so you can decide if you want to go on an all-in to kill your enemy laner. 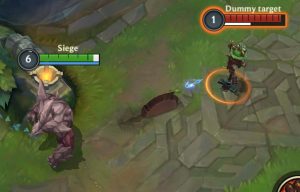 Seismic Shard is a single target spell that deals magic damage and slows the enemy and hastens Malphite for the same amount.

This ability is great for poking in the early game as it is unavoidable once cast.

In the later stages of the game, it is best to use it against the enemy’s ADC or bruiser so you can kite them out or kill them outright. 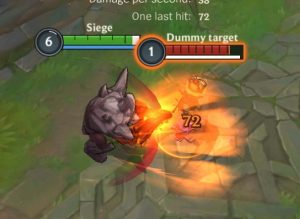 Thunderclap is the core ability of Malphite’s defense because it passively grants bonus armor.

Its active component grants bonus damage, more on the first attack, and makes your auto attack deal damage in a small conal area.

Thunderclap is also an auto-attack reset so if you are in melee range of an opponent, attack once then activate this ability to land another attack in quick succession.

This ability works against towers and you can clear the minions under the tower quickly as well by adjusting your attacks towards the turret to hit the minions as well while Thunderclap is active. 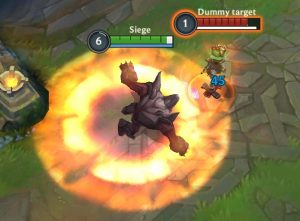 Ground Slam is an AoE ability that slows down the attack speed of affected enemies at the same time.

Use this ability to impair the damage output of their ADC especially after using your ultimate, Unstoppable Force. If you are going to do this, wait until the very last second the knock-up ends so you’ll make full use of the debuff. 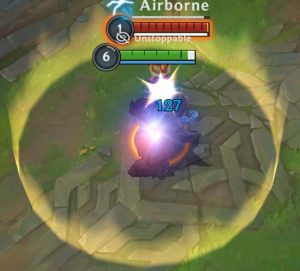 Unstoppable Force is a near-instant dash that damages and knocks up all enemies around the target area. Like its name, this ability cannot be stopped.

Hitting all five champions of the enemy team is the ideal scenario but it is a rare sight because as you rank up, players will try to avoid sticking together so they won’t be knocked up by Unstoppable force.

Because of this, hitting two or more champions is usually enough just make sure that you hit the enemy’s ADC or priority target.

You can use Unstoppable Force to move over walls which is especially useful when trying to contest Drakes or Baron.

Malphite in the early game can easily create an unfair advantage against the enemy champion he is laning against using the harass from his 1st, Seismic Shard, and innate tankiness from his passive, Granite Shield and 2nd, Thunderclap.

Patiently lower your opponent’s HP so you can kill them with an all-in once you acquire your ultimate, Unstoppable Force.

If the enemy fights back, use 2nd, Thunderclap, and 3rd, Ground Slam to deal some damage then use 1st, Seismic Shard to disengage with the movement speed slow on them and buff on yours once you have used your abilities.

Stay behind minion lines as you wait for your passive to refresh then play aggressively again.

In mid to late game fights, Malphite has one job. Land his ultimate on as many enemy champions as possible. If you landed on three or more champions, congratulations, you have turned the tide of battle into your team’s favor.

After using your ultimate, focus on the enemy’s ADC so you can slow their attack speed using your 3rd, Ground Slam, and their movement speed using 1st, Seismic Shard.

Yasuo’s Last Breathe is an extremely strong follow-up to Malphite’s Unstoppable Force because it extends the duration of the knock-up which leaves no room for the enemy to counter attack your initiation.

Diana’s Moonfall is another ultimate that is a strong follow-up to Malphite’s Unstoppable Force as the long knock-up duration is enough to fully charge Diana’s ultimate.

Gragas is a tough matchup for Malphite because he deals magic damage, he can toughen up himself and heal himself. And he can mess up your initiation because his ultimate is a good counter initiation ability that works by damaging and scattering your team.

Janna is another hard counter to engage champions. If you fail to include Janna in your ultimate range, she’ll nullify your initiation.

Here are some pros and cons if you are playing with Malphite in Wild Rift.

FAQ's About Malphite in Wild Rift

How good is Malphite in Wild Rift?

Malphite is an (Tier S) champion. He is a great pick on a team fighting composition and a safe counter to AD heavy teams thanks to his passive armor buffs.

What role / lane should I play with Malphite in Wild Rift?

Malphite is traditionally played as a Baron laner who hard counters AD champions like Fiora and Camille. He can also be played in the middle lane as a team fighting-oriented AP/tank hybrid. Some like to play him as a support but there are far better supports compared to him.

What abilities do I level up with Malphite?

What items should I build with Malphite?

Malphite’s core items are Sunfire Aegis and Iceborn Gauntlet when playing as a tank. Both of these items provide balanced amounts of damage and utility. When played as an AP carry, Luden’s Echo and Rabadon’s Deathcap grants the highest amount of burst damage possible.

What Runes should I use when playing as Malphite?

Grasp of the Undying offers bonus damage, healing, and bonus HP on attacks while Aery grants bonus damage to his 1st, Seismic Shard pokes. His other runes are Weakness, Backbone, and Hunter – Genius.