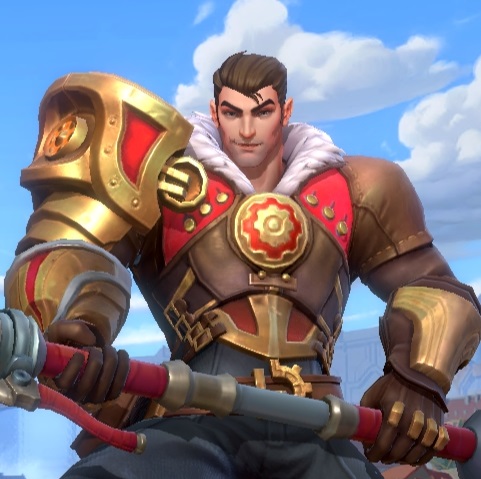 Best Jayce Wild Rift build guide for Season 7 Patch 4.0 of WR. With our Jayce guide you will learn which items to build, runes to select, skill order, who counters Jayce, and how to use abilities properly.

Here are Item Build Recommendations that works on this champion and which are the best build for Jayce Wild Rift in this patch.

The Defender of Tomorrow

This is the standard build for Jayce as it will allow him to constantly harass enemies without worrying about his mana pool and it will scale him into the mid game with much firepower.

Runes for Jayce in Wild Rift

Ignite is great in the early game for forcing the issue and bagging the first blood. But if you are uncomfortable with the matchup, use Barrier instead.

Flash will help you secure kills or escape death.

You may only allot ability points on Jayce’s three basic abilities as his ultimate slot is only for swapping weapons. you can either maximize his abilities in a balanced manner for a consistent damage output or you may max Jayce’s 1st ability, To The Skies! / Shock Blast first then his 3rd ability, Thundering Blow / Acceleration Gate to scale his burst damage output instead.

When Jayce swaps weapons he gains movement speed for a short duration.

To the Skies! / Shock Blast

Cannon Stance: Fires an orb of electricity that detonates upon hitting an enemy (or reaching the end of its path) dealing physical damage to all enemies hit.

Hammer Stance: Deals magic damage to an enemy and knocks them back a short distance.

Cannon Stance: Deploys an Acceleration Gate increasing the Move Speed of all allied champions who pass through it. If Shock Blast is fired through the gate the missile speed, range, and damage will increase.

Hammer Stance: Transforms the Mercury Hammer into the Mercury Cannon gaining new abilities and increased range. The first attack in this form reduces the target’s Armor and Magic Resist.

Jayce can switch between two forms, Mercury Cannon and Mercury Hammer. Each form grants Jayce a unique set of abilities with cooldowns separate from each other.

You should practice keeping a mental note of Jayce’s cooldown so you’d know the proper tempo on stance switching so that you will be able to maintain a constant flurry of damage with Jayce.

When coming back from the base, spam switching forms so you will be able to take advantage of the speed boost often. 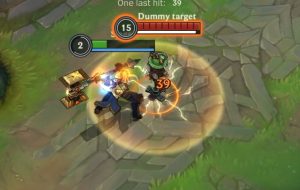 To The Skies! Is a targeted dash ability that damages and slows enemies in a small area.

You will be using this ability to close the gap between you and your target before using your other abilities on them.

Do not hesitate to spam this ability if you need to shove waves when defending or before recalling to base.

To The Skies! cannot be Flash buffered. If you flashed during the animation of this ability, you will cancel the ability and it will fail to deal damage. 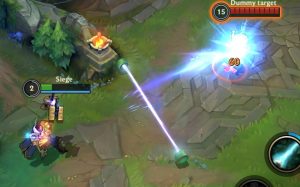 Shock Blast is a ranged skill shot that deals damage to a small area when it first collides with an enemy.

Shock Blast is mostly used to harass in the laning phase and to finish off enemies.

Shock Blast’s damage and range increases when it passes through an Acceleration Gate. In the middle to late game, this combo deals a lot of damage. It deals enough damage to finish off enemies or at least discourage them from attempting an engage. 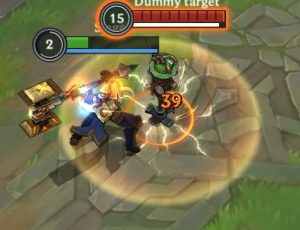 When activated, Lightning Field releases an electrifying aura, dealing area magic damage to enemies over four seconds. It does not deal significant damage by itself but nevertheless, activate it during fights for additional damage.

When Jayce is using his hammer, Lightning Field passively restores mana with each auto-attack. Although, without Manamune, this is not enough to sustain Jayce’s mana requirements. 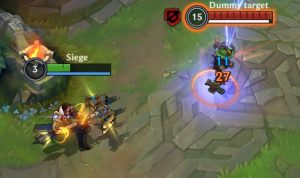 Hyper Charge grants Jayce a burst of attack speed for three attacks. It deals less damage with each attack compared to his normal auto attacks but the damage per second during this time is superior to his normal DPS.

Hyper Charge can not only be used on champions, but it is also a great tool to take down turrets fast.

Hyper Charge is also an auto attack reset so use it after a normal auto attack so that you’ll be able to unleash four attacks in quick succession instead of just three.

It deals a percentage of the maximum health of those hit by this ability, making it a potent damage ability against tanks.

It may be a targeted ability, but those close to your main target also receive damage and are knocked back.

It is possible to execute a mini Insec combo with Thundering Blow by using Jayce’s 1st ability, To The Skies! then Flash towards the backside of your target then knocking them to your teammates or turret using this ability. 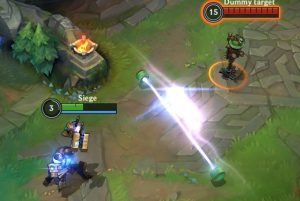 Aside from buffing Shock Blast, Acceleration Gate also grant decaying bonus movement speed to Jayce and to all allied champion who passes through the gate.

Do not hesitate to use Acceleration Gate to get back faster to the lane after recalling.

Jayce is an early game bully, especially when played against melee top laners.

Use Jayce’s ranged form, Cannon Stance, to harass enemies whenever they get close to last hit minions.

If the enemy tries to engage on you, unload Jayce’s 1st ability, Shock Blast, and 2nd ability, Hyper Charge then switch to his melee form, Hammer Stance, and use all abilities.

Use Jayce’s 3rd ability, Thundering Blow last before switching up into his ranged form again to finish off the enemy with his Shock Blast + 3rd ability, Acceleration Gate combo.

In the middle to late game, focus on split pushing because you have the most effective split push potential on the map thanks to your high movement speed and Teleport enchant.

If an enemy tries to fight you, engage if you are ahead in terms of gold and experience or run if they are the one who is ahead or if you will be fighting against two or more of them.

If you need to disengage on a fight you know you are going to lose, use Jayce’s 3rd ability, Thundering Blow to push them away then switch into his Cannon Stance then use his 3rd ability, Acceleration Gate for the bonus movement speed.

Lee Sin and Jayce is unlimited roaming potential. If the both of you get an early game kill or two, it’s game over for the enemy team. But if you fail to get an early game lead or fail to close the game in the mid game, you will have a hard time in the late game.

Vi is another early game partner to 2v1 the Baron lane. Vi might not have the explosive damage and roaming capabilities of Lee Sin in the early game, but she can transition into an effective initiator and peeler in the late game.

You don’t possess the explosiveness to kill Garen in the early game and he’ll just regenerate the poke you’ll deal to him. Unless the Garen allows you to freely hit him, you’d never win the lane.

Pantheon deals much more damage than you in the early game but Jayce has his range advantage. In this matchup, do not be the one to lose his patience in the poke battle. You can counter his stun using Jayce’s 3rd ability, Thundering Blow and be careful not to unload your abilities if he has his shields up.

Irelia has a pretty dangerous all-in and if you get marked, you won’t be able to get away as the knockback range from Jayce’s 3rd ability, Thundering Blow is less than Irelia’s dash range. Do not engage if she has two stacks or more as you will lose the trade.

Darius is a pretty easy matchup as long as you don’t let him hook you in and if he does, knock him back as soon as he uses his Decimate so he won’t be able to heal.

Proc Yasuo’s shield through poking him, harass until he uses his Windwall then repeat.

Use the burst damage build when fighting Teemo or other ranged top laner so you’d be able to burst them down. Do not let them harass you. If the enemy Teemo get close to harass you, initiate an all in as he won’t be able to match your damage output.

Here are some pros and cons if you are playing with Jayce in Wild Rift.

FAQ's About Jayce in Wild Rift

How good is Jayce in Wild Rift?

Jayce is a (Tier S+) champion. Jayce is an early game bully but like other early game champions, you need to dominate in the early to mid game or else you will have a hard time in the late game.

What role / lane should I play with Jayce in Wild Rift?

Jayce is traditionally played in the Baron lane as a lane bully who can use his ranged form to bully his matchup. He can also be played in the mid lane to counter melee fighters and assassins.

What abilities do I level up with Jayce?

You may only allot ability points on Jayce’s three basic abilities as his ultimate slot is only for swapping weapons. you can either maximize his abilities in a balanced manner for a consistent damage output or you may max Jayce’s 1st ability, To The Skies! / Shock Blast first then his 3rd ability, Thundering Blow / Acceleration Gate to scale his burst damage output instead.

What items should I build with Jayce?

Jayce’s core items are Mamamune to help with his mana-intensive abilities and Youmuu’s Ghostblade so that he will have unparalleled burst damage and roaming capability.

What Runes should I use when playing as Jayce?

Aery fits Jayce’s lane bully playstyle perfectly. But if you are against a squishy champion, Electrocute can also work for him. His other runes are Brutal, Bone Plating, and Sweet Tooth.

How do I maximize my damage output with Jayce?

Keeping a mental note of the cooldown of Jayce’s abilities is a must for mastering him because the cooldown for his alternate stance cannot be seen while it is not used.