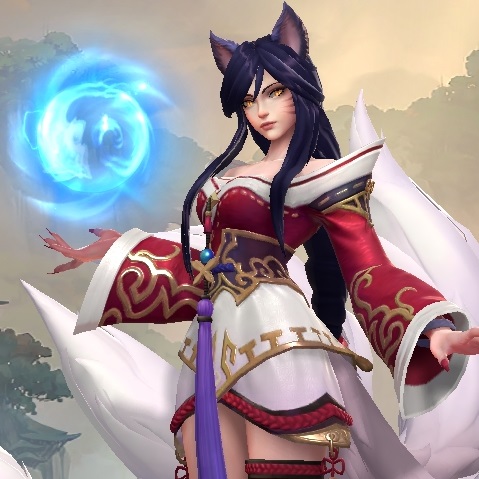 Best Ahri Wild Rift build guide for Season 7 Patch 4.0 of WR. With our Ahri guide you will learn which items to build, runes to select, skill order, who counters Ahri, and how to use abilities properly.

Here are Item Build Recommendations that works on this champion and which are the best build for Ahri Wild Rift in this patch.

This is the main Ahri Wild Rift Build which focuses on maxing her cooldown reduction items first then increasing her burst damage. The emphasis on cooldown reduction is important because it will allow Ahri to use her ultimate, Spirit Rush, as much as possible. Horizon focus is also a great addition especially for champions with immobilizing abilities such as Ahri.

For Ahri Wild Rift build, this maximizes the burst damage of Ahri which is perfect when you think the game has a slower pacing than usual. It offers more burst damage and magic pen thanks to Infinity Orb and Void staff. Hence, it is excellent for aggressive plays, potentially giving you the chance to one shot someone. Speaking of aggressive plays, Protobelt Enchant is also here so you can easily dash in and out for duels or skirmishes. You are however somehow safe under the protection of Banshee’s veil.

Runes for Ahri in Wild Rift

These two are the best spells you can equip for Ahri Wild Rift.

Ahri is an aggressive champion and Ignite will help you land more kills all game long.

It is inadvisable to use Spirit Rush to escape enemies so reserve your Flash for dangerous situations instead.

After scoring a champion takedown within 3 seconds of damaging them, Ahri consumes their essence to heal herself for 80/120/160/200 + 40% Ability Power.

Can be cast up to 3 times within 10 seconds before going on cooldown.

During Spirit Rush, Ahri will extend Spirit Rush’s recast duration for up to 10 seconds and gains an extra charge of Spirit Rush if she devours a champion’s essence using Essence Theft. This can store up to 3 charges. 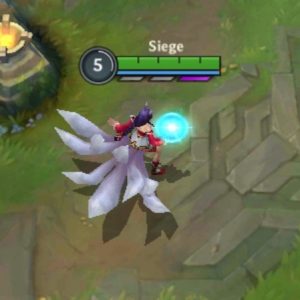 Ahri’s spirit ball turns bright blue-green when she gets the max stack of her passive, which is after three spells. The next spell will heal her depending on her AP.

Unlike her PC version, the Wild Rift version of Essence Theft heals once regardless of which ability you choose so you don’t necessarily have to use your 1st, Orb of Deception, to make the most of your passive. Using any spell to activate Essence Rift is fine. 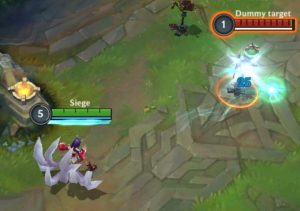 Orb of Deception is Ahri’s main source of damage. It deals magic damage on the way to its max range then it turns purple and deals true damage on its way back.

The best way to hit an enemy with Orb of Deception is on its max range because it will instantly deal both forms of damage that way. If the enemy is close, move in parallel of the direction of your target because the ball will curve back to you, increasing your chance of hitting the enemy with true damage. Use Spirit Rush if necessary.

Practice simultaneously hitting minions and your enemy champion in the laning phase. 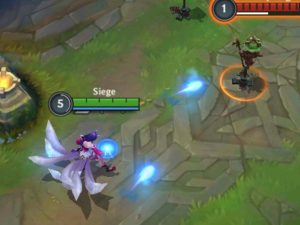 Fox-Fire summons 3 little fireballs around Ahri which target enemy’s based on this priority:

All three fireballs can hit the same target but deals reduced damage after the first. It is worthy to note that they also have a separate area of effect.

Fox-Fire simply some bonus damage but it can be a good way to instantly activate your Essence Theft because it has a near-instant casting time.

Fox-Fire increases your movement speed so use it to catch up to enemies, escape them and/or dodge their skill shots. 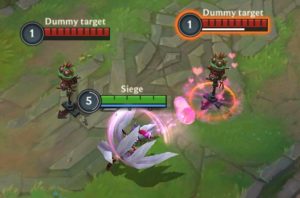 Charm is the strongest single target charm ability in all of League of Legends (PC version included, yes.)

The charm effect has for at least 1.4 seconds up to two seconds which is more than enough time to kill the enemy. The charmed enemy also receives 20% more damage from Ahri’s abilities. It won’t increase damage from item effects, ignite, and auto-attack of Ahri, though.

The easiest way to hit Charm is to reposition yourself with Spirit Fire first. Practice the discipline of not casting Charm if you are not 100% sure that it will hit because it provides more than half of the effectiveness of your combo.

The enemy you charmed will walk towards your direction and will follow you even if you change direction. 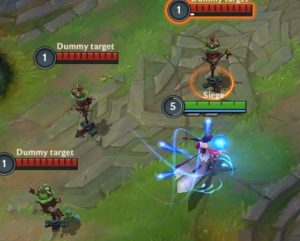 Spirit Rush allows her to dash for a maximum of three times. Each dash releases up to three small orbs which damage enemies around her.

Spirit Rush is key to her fast and playful offensive style and it allows her to outplay most opponents with well-timed usage.

There is a fixed short cooldown between each dash.

Even if Ahri has exceptional mobility with her ultimate, it is advisable to learn how to position correctly so you’ll minimize the chances of being forced to use Spirit Rush defensively.

It is a great setback to put this ability on cooldown without getting any kills.

You can outstyle your opponents by doing a Charm + Flash + Spirit Rush combo which will hide the Charm’s projectile and will surprise them. Although, it is not a practical way to use Flash and it is not reliable but there’s no stopping you from learning and doing the combo for style points.

Ahri has adequate range and poke thanks to her 1st, Orb of Deception. She can safely clear her wave from afar and she can secure her last hits or shove the wave using the same ability.

She can use her 2nd, Fox-Fire to harass overextending enemies, especially if your enemy is a melee champion. Also use 2nd, Fox-Fire’s movement speed bonus to dodge your enemy’s skill shots.

Keep using your first two abilities to reduce the HP of your enemy and shove your lane. If an opportunity presents itself, use your 3rd, Charm. A successful 3rd, Charm cast will force your enemy to use their summoner spells, recall, or die.

Never spam your 3rd, Charm. Once you miss this, the enemy will try to all-in on you.

After reaching level 5, look if you can kill your enemy laner or gank the side lanes using your ultimate. Every time your ultimate is available, look for a kill but once you have used your ultimate, go back to your lane and farm and do not overextend because the enemy jungler will try to gank you if they know that you have your ultimate on cooldown.

In the mid game and late game, your role is to help your team pick off enemies one by one.

If you are fed and have your ultimate available, you should use it to make plays to kill the enemy’s carry and get the attention of the enemy team.

But if you are playing behind, you should focus on assisting your team by dealing additional damage and landing your charms on the enemy. Never go far from your tank or support, especially if your ultimate is on cooldown.

It is highly recommended using Ahri Wild Rift with the following champions as they synergize well with her.

Ahri and Vias ganking partners is a sure kill strategy that can easily pick off enemies easily one by one. Vi has two easy-to-hit crowd controls and Ahri will have an easy time landing her abilities because of that.

Amumu makes enemies scatter due to the fact that they don’t want to be caught in his ultimate and if they are scattered, it will easier for Ahri to pick them off one by one. Amumu’s passive, Cursed Touch also amplifies Ahri’s damage output.

In this section, we’ll tackle some of Ahri Wild Rift Counters.

Yasuo can easily counter your skills and he’ll definitely wait for your Charm to nullify it with his 2nd, Wind Wall.

Katarina has extreme mobility she can easily follow you during your ultimate using her 3rd, Shunpo. Thanks to her high mobility, she is extremely hard to charm. She is most vulnerable right after blinking with her 3rd, Shunpo so you can try your luck there. If, you’re not dead yet.

Here are some pros and cons if you are playing with Ahri in Wild Rift.

FAQ's About Ahri in Wild Rift

How good is Ahri in Wild Rift?

Ahri is an (Tier S+) champion. She is a safe pick in most cases and can carry the game once you are proficient with her.

What role / lane should I play with Ahri in Wild Rift?

Ahri is played in the mid lane as an AP carry.

What abilities do I level up with Ahri?

What items should I build with Ahri?

What Runes should I use when playing as Ahri?

Electrocute activates on combos and trades which deals additional damage to affected enemies. Her other runes are Brutal, Spirit Walker and Sweet Tooth.

Any tips so I can aim my charms with Ahri?

Stay calm and hold off on using it unless you are sure that your charm will hit. Use it under brushes and in combination with your ult or flash.