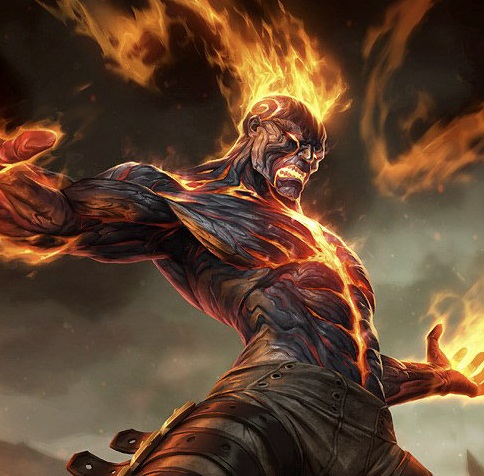 Best Brand Wild Rift build guide for Season 7 Patch 4.0 of WR. With our Brand guide you will learn which items to build, runes to select, skill order, who counters Brand, and how to use abilities properly.

Brand is the burning embodiment of greed and vengeance. Once the son of a Freljordian healer and an apprentice and friend of the famous sorcerer Ryze, the former Kegan Rodhe sought the power of the World Runes for himself and as result, he became an anarchic being that only knows how to take and burn everything in his path. Brand is a backline mage that burns the enemy team through his potent flame magic. Nothing, not even the most hardened tanks, can survive his blazing fury.

Here are Item Build Recommendations that works on this champion and which are the best build for Brand Wild Rift in this patch.

The Burning Vengeance build is the support Brand build that focuses on increasing the effectiveness of Brand’s passive, Blaze by stacking effects on it through the core items.

The Explosive Radiation build is most viable in the mid lane as the additional early game AoE damage will help on shoving lanes and burst damage.

Runes for Brand in Wild Rift

Ignite and Brand’s passive, Blaze will make it hard for enemies to survive the stacked damage per second.

Brand is an immobile mage so he absolutely needs Flash in order to survive if an enemy manages to get near to him.

Brand’s 2nd ability, Pillar of Flame is maxed first as it deals the most damage, especially when cast on targets that are Ablaze. His 1st ability, Sear is maxed next to lower its cooldown so you will be able to stun enemies more often. The 3rd ability, Conflagration is maxed last because it is mostly used only to spread Brand’s passive. Get a point in Brand’s ultimate, Pyroclasm when possible.

Stacking Ablaze 3 times on champions and large monsters cause them to detonate after seconds, dealing 10% (10% + 0.02%) of each nearby max Health as magic damage.

Blaze: Sear stuns for 1.75 seconds if the target is ablaze.

Blaze: Pillar of Flame deals 25% more damage to enemies that are ablaze.

Blaze: Conflagration spread farther if the target is ablaze.

Releases a torrent of flame that bounces up to 5 times between enemies or himself, each bounce dealing 100 magic damage (100 + 25% AP).

Blaze: Pyroclasm briefly slows by 30% if the target is ablaze. 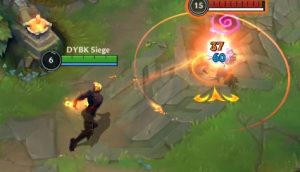 Brand’s abilities set enemies Ablaze. Enemies that are Ablaze are dealt 3% of their max HP as magic damage over 4 seconds. That is 0.75% magic damage per second.

Marking enemies three times with Blaze will cause them to detonate, dealing magic damage based on the max HP of all nearby enemies. This means that it deals more damage if you can proc it while they are grouped up together. Although, the mark detonates after a two second delay so it is highly unlikely it will detonate while they are all close together as their first instinct will be to run away from each other.

The detonation also applies Blaze on other enemies if they did not detonate simultaneously with the initial target. After detonation, an enemy cannot receive additional marks for a short period of time but they will continue to receive damage over time if they are hit with Brand’s abilities.

The tooltip uses the words “Stacking Ablaze” but only the marks stacks, the damage over time portion of the passive remains the same even with one, two, or three stacks.

There are two ways to fully utilize Brand’s passive: 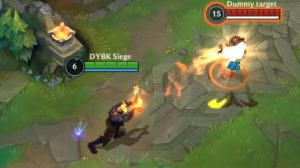 Sear is a linear skill shot that deals damage to the first enemy hit. If the target is Ablaze, Sear stuns for 1.5 seconds.

Sear is Brand’s only self-peeling and crowd control tool. It is primarily used to stun a target to lock them down and burst them to death or it is used to help Brand escape enemies.

Since Brand is an immobile and squishy mage, it is best to play it extra safe when Sear is on cooldown. But if you haven’t used it yet, enemies would be wary of you so use the pressure wisely. You have four seconds of Blaze so you can take your time before using this ability to increase your chances of stunning the enemy.

Sear can be buffered with Flash through a 1st + Flash combo. Sear is cast before using Flash to cancel its animation to surprise enemies. 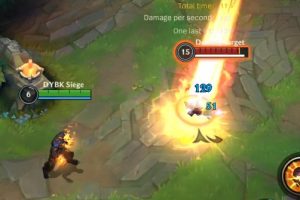 Pillar of Flame is Brand’s main burst damage ability. It deals 25% more damage to enemies that are Ablaze.

Pillar of Flame is an area skill shot tool so it is easier to land compared to Sear due to the fact that enemy champions cannot hide behind minions to avoid this ability.

In the laning phase, you can easily land Pillar of Flame to harass the enemy by waiting for them to go near to last hit minions, especially the cannon minions.

If you have a clear path towards the enemy, you can simultaneously cast his 1st ability, Sear together with Pillar of Flame for a quick combo as they have similar ranges. Cast Sear first to deal more damage or cast Pillar of Flame first to stun the enemy. 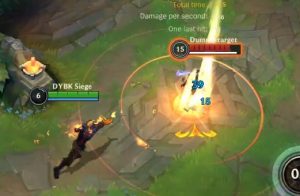 Conflagration is a point-and-click ability that spreads on nearby enemies. If the main target is Ablaze, Conflagration spreads farther.

If the enemy is playing extra safely, you can harass them by using Brand’s 1st ability, Sear on a nearby minion then casting Conflagration on that minion. Since the target is Ablaze, it will spread Conflagration to enemies with few options for counterplay. 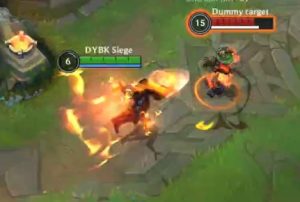 Pyroclasm can be one of the most devastating ultimates in Wild Rift. Brand releases a torrent of flame that can bounce up to 5 times between enemies or himself. Each bounce deals magic damage and applies a stack of Blaze. If the target is already Ablaze, the target is slowed and Pyroclasm prioritizes targets that have two stacks then one before it bounces to enemies that have no stacks.

Pyroclasm is best used when multiple enemies are controlled through area control abilities of your teammates.

On 1v1 situations, it can deal burst damage, especially when chained with your other abilities since Pyroclasm can also bounce through Brand himself. Also, on 1v1 situations, you can use Pyroclasm to bluff enemies that you are throwing his 1st ability, Sear so you can surprise the enemy that your stun is still available.

Brand is oppressive in the early game as long as you can land his skill shots. Set your enemies Ablaze using his 1st ability, Sear or 3rd ability, Conflagration then follow it up with his 2nd ability, Pillar of Flame to deal more damage.

A trick to safely harass enemies from a safe distance is to use the 1st ability, Sear on a minion to set it Ablaze then use the 3rd ability, Conflagration on the minion to make the flame jump to the enemy champion.

Wait for the enemy to go for a last hit, especially on cannon minions to punish them for gaining gold.

If possible, try to land all three basic abilities on the enemy to detonate the Blaze passive.

While harassing the enemy, always remember that Brand is an immobile mage that can be easily killed so never overextend and always stay at the warded side of the lane.

In the middle and late game, Brand is going to play the role of an artillery mage and then wait for the opportunity to burst down the enemy team with your whole combo.

Brand’s kit works better if the enemy team is grouped up together so wait for the opportunity for it to happen before casting all of Brand’s abilities, especially his ultimate, Pyroclasm that can be extremely deadly when used in the right situation.

While waiting for the right situation to arise, stay in the backlines but at the same time try to hit enemies from a safe distance so you’ll be able to damage them and stack Blaze on them.

Nunu & Willump is a prolific jungler who is capable of setting up plays for Brand to get early game kills and snowball from there. Their ultimates when cast together can also create a devastating effect to the enemy team if they are not careful.

Fizz and Zed are mobile assassins capable of easily penetrating the backline and one-shotting immobile mages like Brand. Immediately buy a Stasis Enchant to counter their ultimate and in the late game, where they don’t even need their ultimate to kill you, wait for them to burn their abilities before showing yourself.

Soraka is an Enchanter support with lots of healing. She will deny your DPS with her healing and in the late game, even with Grievous Wounds, she will be troublesome to deal with. Look for an opportunity to burst her, preferably with a teammate to help you with bursting her down.

Here are some pros and cons if you are playing with Brand in Wild Rift.

FAQ's About Brand in Wild Rift

How good is Brand in Wild Rift?

Brand is a (Tier A) champion. He is an oppressive laner and he can build a lead early through the pressure built up from his skillshots. Plus, he creates extreme pressure in team fights because he deals more damage when people are grouped up.

What role / lane should I play with Brand in Wild Rift?

Brand is traditionally played as an offensive support because he plays well even without much gold gain. He can also be played in the mid lane as he is an oppressive laner that can easily create lane priority.

What abilities do I level up with Brand?

Brand’s 2nd ability, Pillar of Flame is maxed first as it deals the most damage, especially when cast on targets that are Ablaze. His 1st ability, Sear is maxed next to lower its cooldown so you will be able to stun enemies more often. The 3rd ability, Conflagration is maxed last because it is mostly used only to spread Brand’s passive. Get a point in Brand’s ultimate, Pyroclasm when possible.

What items should I build with Brand?

Brand’s core items are Liandry’s Torment so you’ll be able to stack more % HP damage over time, Rylai’s Crystal Scepter as its Icy passive that slows down enemies is reapplied each time the Blaze passive ticks. Brand can also buy Luden’s Echo as a first item for more burst damage.

What Runes should I use when playing as Brand?

Aery allows Brand to consistently deal more damage through pokes. Alternatively, Electrocute is great for bursting down a single target. His other runes are Brutal, Bone Plating, and Hunter – Genius.

How do I maximize my damage as Brand?

You can maximize damage as brand through two ways, first by consistently landing skillshots so that the enemy would always be Ablazed. The most ideal pacing on Brand’s abilities is once every two seconds.

The second way is to burst down enemies and quickly apply the Detonation of the Blaze passive by quickly using all the basic abilities in quick succession. You have to have a clean hit for Brand’s 1st ability, Sear and the ideal combo progression is 3rd > 1st > 2nd.