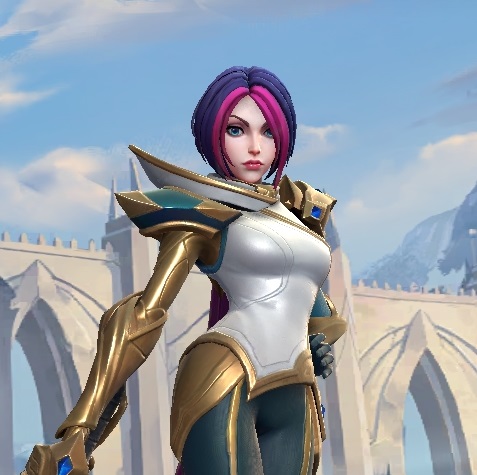 Best Fiora build guide for Season 2 Patch 2.3 In Wild Rift. With our Fiora guide you will learn which items to build, runes to select, skill order, and how to use Fiora abilities properly. Tips and tricks for how to play Fiora and counter your enemies.

The most feared duelist in all Valoran, Fiora is as renowned for her brusque manner and cunning mind as she is for the speed of her Bluesteel rapier. Fiora is a melee Baron lane bully and one of the strongest 1v1 duelist at all stages of the game.

New Vitals are revealed after striking one, or after 16.75s.

Lunges and stabs a nearby enemy, dealing 85 physical damage (85 +100% bonus AD) in an area. Hitting an enemy refunds 60% of the cooldown.

Lunge prioritizes Vitals and enemies it will kill. Applies on hit effects to the primary target.

Parries all incoming damage and debuffs for the next 0.75 seconds. Then stabs in the target direction, dealing 120 magic damage (120 + 100 AP) to the first enemy champion, slowing their Movement Speed and Attack Speed by 50% for 1.5 seconds.

Riposte stuns instead of slows if it parries an immobilizing effect.

Empowers the next 2 attacks with 60% Attack Speed. The first attack applies a 30% slow for 1s, but cannot critically strike. The second attack always critically strike for 170% physical damage.

Reveals all 4 Vitals on an enemy champion for 8 seconds and grants Duelist’s Dance’s Movement Speed while near them.

Striking all 4 Vitals in 8 seconds or if the target dies after at least one hit- heals Fiora and nearby allies for 80 (80 +60% bonus AD) each second. The heal persists for 2 to 5 seconds, scaling with the number Vitals hit. 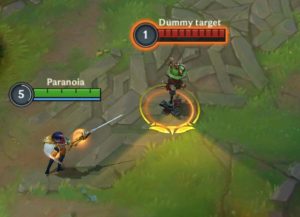 Her passive reveal an enemy’s “Vital” on a random angle near the enemy champion. It is somewhat like revealing the enemy’s weak points and Fiora can strike them using her Q, Lunge, W, Riposte, or auto-attacks.

When Fiora strikes a Vital, she deals additional true damage, heals herself, and she gains bonus movement speed.

Vitals show up in these angles ⇖ ⇗ ⇘ ⇙ and they are revealed in opposites which are grouped like this: ⇖⇙ and ⇗ ⇘. This means if the Vital which appears is this one: ⇖, the next Vital will be either one of these: ⇗ ⇘.

Striking Vitals is key to playing Fiora in all stages of the game. At the start of the match, position yourself in a deep bush near the enemy’s base to quickly strike the enemy’s Vitals so you will start the laning phase with an early advantage.

Always start your trades with your abilities available so you will be able to strike the enemy’s Vitals with ease. If your abilities are on cooldown, distance yourself for a while waiting for it to refresh.

Take note that enemies can counter Duelist’s Dance by sticking the side where their Vital is into a wall. 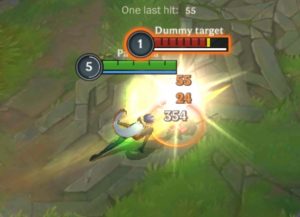 Lunge is a dash ability that damages an enemy unit. It damages enemies in a short and small area. The direction which it hits follow a prioritization model like this:

There might be times where you’ll be using Lunge to kill an enemy then another champion comes with their Vital pointing towards your Lunge direction. It will hit the champion’s Vital instead which will likely result in the enemy running away.

Lunge’s cooldown is reduced by half when you hit an enemy so make sure you hit something when using the ability because you’ll be punished with a long cooldown if Lunge hits nothing.

A neat trick to Lunge is to execute a short-range Lunge by controlling the direction where you will land by holding and dragging the ability button. Usually, an enemy will counteract with their abilities when you use Lunge so doing this trick randomly (you don’t want to be predictable when using Fiora) will waste their abilities. You’ll still be able to land the Lunge because it extends from the dash direction in a circular AoE. 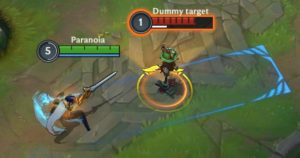 Riposte is a parry ability and is Fiora’s main outplay tool. She channels upon casting and becomes invulnerable to all damage except turrets. She then thrusts in a small AoE in front of her which deals damage and slows the enemy’s movement speed and attack speed. If Fiora becomes affected by crowd control during the channeling stage, the CC is absorbed and the thrust will now stun instead of slowing enemies.

Riposte is a great defensive and 1v1 weapon for Fiora. She is strong with it and it makes enemies think twice about fighting you. Without it, enemies can land their skills on you without worry.

So think twice about when to use Riposte. Knowing when to use this ability will come from playing Fiora a lot because situations will vary depending on who you are matched up with.

Offensively, Riposte can be used in combination with Lunge to execute a “Slideparry“. A term coined by SpookeyNeedles from the Discord channel for Fiora mains.

The Slideparry should be used to land a stun to counter a winding crowd control ability of an enemy. A few examples which this is easy to do is against Jinx’s Flame Chompers, Lux’s Light Binding, and Gragas’s Explosive Cask.

The Slideparry is extremely risky and should be used with caution or if only you are feeling confident about your game.

Riposte’s stun is just a secondary factor or simply a “bonus”. Deflecting an attack and then simply slowing the enemy will already result in a big advantage for you. 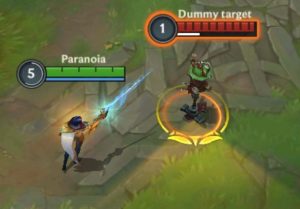 Bladework amps up your DPS by being an auto-attack reset, increasing your attack speed, applying a slow in the first attack, then doing a guaranteed critical hit on the second attack.

Bladework should be used as an auto-attack reset in the laning phase to further nudge you into your unfair laning advantage because if you land a Vital strike then followed it up with a Bladework attack, you will have increased movement speed while the enemy will be slowed. This gives you a kiting advantage and will likely result in another successful Vital Strike. 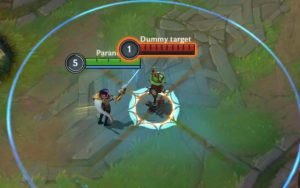 Upon activation of Grand Challenge, four Vital spots are revealed in the target Champion. Striking all Vitals or killing the target champion after at least striking one Vital will summon a field that heals you and your team.

Grand Challenge is a great burst and outplay tool because it allows you to strike multiple Vitals which will result in dealing a massive amount of true damage and healing yourself for each Vital hit and more when the healing field is activated.

With enough experience, Grand Challenge will allow you to win 1v1s with Champions with higher level and gold compared to you or even win 1v2 fights.

Grand Combo: Q + R + AA + E + AA + Q + AA (Strike a Vital first with Q before activating R but if the Vital is in the opposite direction, start the combo with R)

Here are Item Build Recommedations that works on Fiora

This is the standard build for Fiora which allows her to stand on top of 1v1s almost all the time.

This build is what you’ll need if your team lacks a front liner and you are forced to play the part just because you are the top laner.

Ignite is absolutely recommended with Fiora because it will help you secure early kills in your lane and provides additional DPS in your combos all through out the game.

Flash is an absolute necessity for Fiora so she can go in and out of the battlefield with ease. Keep in mind though, Flash buffer does not work with her abilities.

Maxing Q, Lunge is top priority as it is Fiora’s main damaging and mobility tool. Leveling Lunge decreases its cooldown and therefore increases Fiora’s overall output. E, Bladework is maxed next for the added DPS and W, Riposte is maxed last because it is used for its utility that can usually be activated just once in a fight because of its long cooldown. Put a point in Grand Challenge whenever possible.

Fiora is an early game bully. You should size up your opponents. Understand their movements and see if you can bully them.

If they are reactive, meaning that they base their moves on yours, you will be able to predict their movements.

If you are able to predict their movements, you will be able to bully them and cancel their abilities using your W, Riposte. You can also avoid skill shots using your Q, Lunge.

Hone your killer instinct with Fiora through spamming her because if you don’t win the early game, the rest of the game becomes an uphill battle.

If somehow you lost your lane, keep your head down and focus on split pushing. Play safe and ward the turret you want to take down. Make sure that the enemy knows that they will only waste time trying to chase you.

In the late game, still focus on split pushing. Hopefully you are fed enough now to win even 1v2 fights.

Keep your Teleport ready for taking objectives. It is better if you are going to flank the enemy team late when their abilities are now on cooldown to clean up fights as you don’t do well in full-blown fights.

Soraka‘s ultimate, Wish, heals all allies in the map and it is immensely useful for Fiora because she can be losing a fight while split pushing 1v2 then Soraka presses a button and suddenly she’s winning.

Malphite has tremendous armor and a recurring shield.  It’s no fun laning against him. Don’t bother building a lead against him. Just shove waves then hunt the enemy’s Jungler or go mid.

Teemo is a long range Baron lane bully who can easily outplay and harass you using his Q, Blinding Dart which can make you miss your auto attacks and his passive Toxic Shot will lower your HP little by little and you can do nothing about it. When against Teemo, play it safe under your tower and immediately buy Adaptive Helm.

Here are some pros and cons if you are playing with Fiora in Wild Rift.

How good is Fiora in Wild Rift?

Fiora is an (Tier S) champion. She is built to do well against lots of matchups even against top tier melee Baron laners like Darius or Gragas. She is great at split pushing and winning duels.

What role / lane should I play with Fiora in Wild Rift?

Fiora is always played in the Baron lane where she can dominate most matchups.

What abilities do I level up with Fiora?

Fiora’s Q, Lunge is always ranked up first as it is her main source of damage and mobility. Her E, Bladeworks is maxed next to increase her overall burst damage.

What items should I build with Fiora?

Fiora’s core item is Trinity Force and you should buy her that item every single game because the all around stats, movement speed, and Spellblade bonus damage is just too good on her. Her other items are all situational.

What Runes should I use when playing as Fiora?

Hey Keystone Rune is either Conqueror for the bonus damage on extended fights and Grasp of the Undying to increase her sustain and survivability. Another important rune on her is Mastermind which helps her take down turrets at a faster rate.

Any tips for landing her W, Riposte?

Learn how your opponent react to your movement. Practice using it until the very last possible moments so you can increase your chances on clutch situations and opponents tend to play more aggressively if your W, Riposte is on cooldown.

How can I quickly hit all the Vitals on Grand Challenge?

Practice, practice, and practice. The more you get used to it, the faster you’ll be able to activate all of them. Having the enemy champion slowed or stunned will make it easier for you to hit all of them as well.