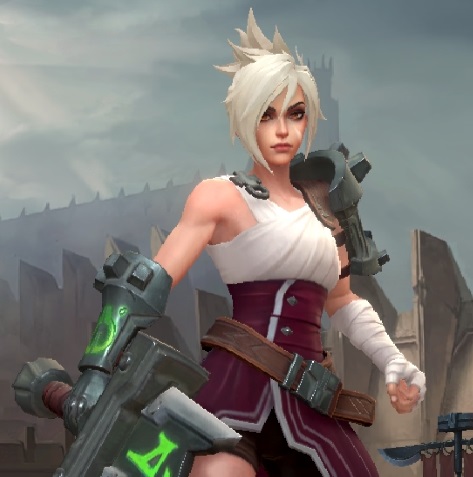 Riven ARAM Build, Runes Guide
Recommendations on item build and runes for Riven in ARAM (All Mid All Random) Mode in Wild Rift, along with a general guide to play Riven in ARAM Mode. Check Riven Main Guide.

Riven has a lot of small AoE abilities with built-in dashes. You have to use those dashes in order to avoid enemy skill shots and only go all-in when the enemies are low in HP and have their abilities on cooldown or else you will risk being burst down yourself instead.

Use the third cast of Riven’s 1st ability, Broken Wings and her 2nd ability, Ki Burst to disrupt enemies with the knock-up and stun, respectively. You have to time your crowd control usage because Riven is vulnerable otherwise.

ARAM is a great avenue to practice Riven’s animation cancels because there is only a small window of opportunity to use her abilities before she dies herself, especially when she activates her ultimate because enemies will usually look to burst Riven down before she is able to unload her combo herself.

Black Cleaver is Riven’s core item as it helps increase her ability damage through shredding the enemy’s armor.

Sterak’s Gage both increase Riven’s survivability so she’ll be able to tank some damage while dishing it at the same time.

If your team already has a reliable tank with crowd control or if you have an enchanter support who can keep you alive like Lulu or Janna, you can build Riven as a glass cannon with

Conqueror is easily stacked by Riven’s combos that emphasize weaving in auto-attacks in between her abilities. She can also use Phase Rush so she can easily go in and out of battle or dive into the enemy’s backlines. Hunter – Vampirism grants physical vamp so she can survive fights for longer periods of time thanks to her high damage output. Hunter – Titan helps against crowd controls and Hunter – Genius helps riven spam her abilities more often.

Mark/Dash allows Riven to quickly dash into an opponent she can burst down.

Flash will allow Riven to escape impossible situations especially when she forces a dive against the enemy’s backlines.