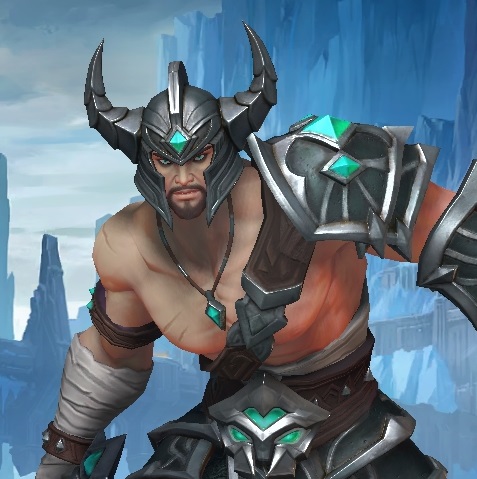 Tryndamere needs to attack a lot to gain his Fury passive which he needs to increase his critical strike chance which in turn allows Tryndamere to cast his 3rd ability, Spinning Slash more often. In ARAM, it is hard to auto-attack freely since minions and champions are all near each other. Because of this, the only chance Tryndamere has to thrive is to steal kills from others in the early and mid game. Once he has enough items, he will be a fearsome raid boss capable of turret diving enemies thanks to ultimate, Undying Rage. Turrets in ARAM hits harder than normal turrets so Undying Rage and Tryndamere can be a tough opponent to handle if ever he reaches late game without feeding the enemy team.

Tryndamere thrives in drawn-out fights so vamp items like

Blade of the Ruined King and

Bloodthirster are great for Tryndamere. He cannot die during his ultimate, Undying Rage but he will still be low on HP if he has no vamp items. Furthermore, he gains more AD the lower his health is because of his 1st ability, Bloodlust. Aside from vamp items, critical items like

Statikk Shiv is a must-have for Tryndamere because he has a natural critical chance bonus in his Fury passive.

Conqueror grants bonus damage the more you hit your opponents. With it, no one can beat you on drawn-out fights. On the other hand, phase Rush and Fleet Footwork will make it impossible to kite your Tryndamere. Gathering Storm will help you scale into the late game while Triumph will make it easier for you to kill low HP enemies while healing you for each takedown. Second Wind helps against pokes thanks to the bonus HP regeneration and Mastermind will make it easier to take down turrets.

Mark/Dash will help you snipe down low HP enemies. They would not be safe even under their turret’s protection.

You will need Flash incase you dive turrets and you have no enemies to hit to recover your HP once your ultimate’s duration run out.