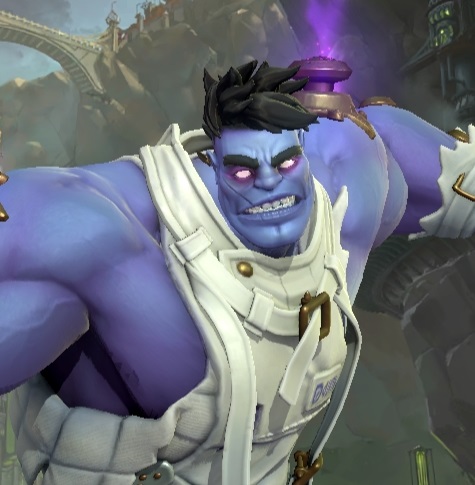 Dr. Mundo’s passive is Adrenaline Rush which grants him bonus HP regeneration. After a few seconds away from the battle, Dr. Mundo will always be ready to fight again.

1st, Infected Cleaver is a skill shot which deals % of the current HP of the first enemy it hits. Make sure to hit enemies with it because it cost HP to cast but it refunds a part of it (the whole cost if the cleaver kills the enemy) when it hits an enemy.

2nd, Burning Agony is a toggle ability that deals magic damage per second. It has amazing synergy with Sunfire Aegis and when it is activated, you will have increased Tenacity (resistance to crowd controls).

3rd, Masochism increases your auto-attack damage, scaling based on how much HP you have lost. The lower Dr. Mundo’s HP is, the more damage he’ll get through 3rd, Masochism. It also passively grants magic resistance everytime he is damaged by magic or pays a health cost. Activate your 2nd, Burning Agony before a fight to stack magic resist beforehand.

Dr. Mundo’s ultimate, Sadism restores half of his max health and increases his movement speed. This ability basically grants you another life to run down your enemy with.

Dr. Mundo’s strength is his ability to soak so much damage, survive, and come back to battle after a short while with full health again.

Spirit Visage amplifies Dr. Mundo’s strength by so much that it would almost make you feel like you are playing an immortal champion. Buy

Guardian Angel just to demoralize your enemies, given how hard to kill you are once you have maxed out your items.

If you are against other HP stacking champions, buy

Liandry’s Torment to deal % of their own HP as magic damage.

Ghost will allow you to stay on top of your enemies with its movement speed bonus.